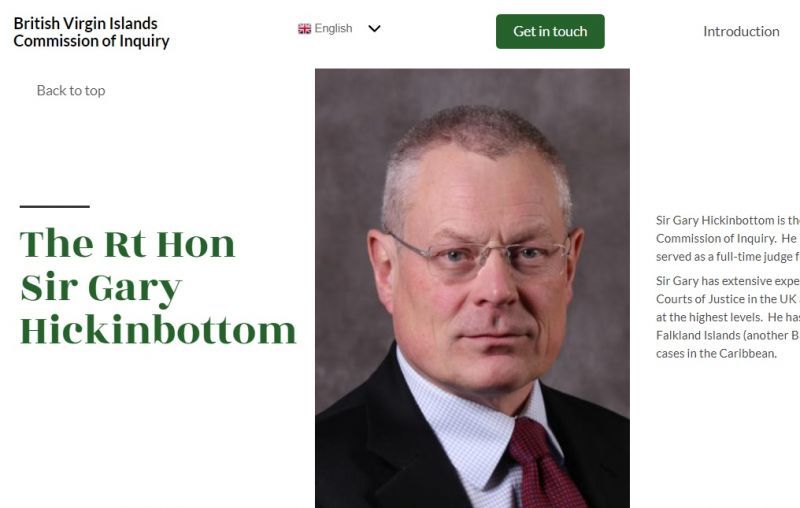 In a press statement that was not shared with Virgin Islands News Online (VINO), the Commission of Inquiry (CoI) in the Virgin Islands has stated that two solicitors have been appointed to the Inquiry.

The Commission of Inquiry was announced on January 18, 2021, by controversial ex-governor Augustus J. U. Jaspert, mere days before he exited the Virgin Islands (VI).

Mr Jaspert had claimed that the CoI is to look into whether corruption, abuse of office or other serious dishonesty may have taken place amongst public, elected and statutory officials in “recent years”.

According to the statement sent to selected media houses today, March 15, 2021, two solicitors, Mr Andrew King and Ms Rhea Harrikissoon, have been appointed to the COI’s legal team, joining Mr Bilal Rawat (Counsel to the Inquiry).

“They bring with them a range of relevant knowledge and experience,” CoI Secretary Steven Chandler stated.

The statement, obtained by our newsroom, said Mr King qualified as a solicitor in private practice in 2009. In 2010 he joined the UK’s National Crime Agency (formerly the Serious Organised Crime Agency) until he moved to the UK Government Legal Department (formerly the Treasury Solicitor’s Department) in 2014 where he held a number of roles primarily dealing with public law litigation.

Ms Harrikissoon, according to the CoI statement, qualified in private practice in 2012, specialising in childcare and family law. She joined the UK Government Legal Department in 2015 and has extensive experience in public law challenges, and more recently with public inquiry work including the Brook House Inquiry and Infected Blood Inquiry. Ms Harrikissoon was the Solicitor to the Windrush Lessons Learned Review.

Was the CoI a vendetta?

While many in the Virgin Islands agree that certain projects in the VI over the years may have warranted an Inquiry, they have been suspicious about the motive for this one, especially since the former Governor, Mr Jaspert, shared a strained relationship with the Virgin Islands Party (VIP) Government.

Mr Jaspert was accused of trying to bully the elected Government of Andrew A. Fahie (R1) and to cause a friction between the government and the electorate.

The ex-governor, who some had deemed insensitive and even racist following statements late last year about reparations and preservation of names of landmarks, was also accused of trying to bully the House of Assembly.

In May 2020, Veteran legislator Hon Julian Fraser RA brought a motion to the House of Assembly to reprimand Mr Jaspert over his late tabling of the BVI Airways Report from the Auditor General.

The motion; however, was defeated.

More to CoI than what meets the eye?

Mr Jaspert seemingly had the last laugh; however, as he kept the Government in the dark about his planned CoI based on “unfounded allegations” and then colluded with the Foreign and Commonwealth Office (FCO) and the UK press to give the CoI announcement international publicity, which sought to damage the reputation of the Virgin Islands.

Some have argued; however, that the real objective of the CoI may be bigger than Governor Jaspert’s apparent ‘tit for tat’ and may be a scheme to set back the Virgin Islands progress in governance and democracy as the territory seeks to push towards self-determination.

This is also the year that the VI seeks constitutional review with the UK and it has repeatedly stated it is not satisfied with the current arrangements, which legislators and political pundits have in no uncertain terms labeled as ‘one sided.