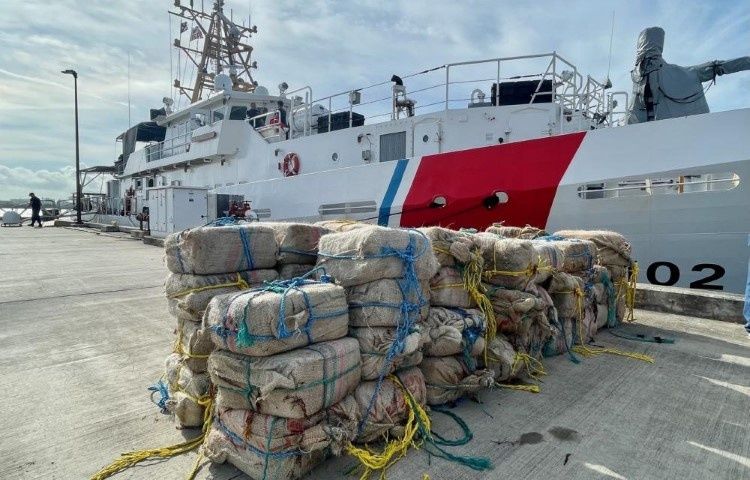 $51M Worth Of Cocaine Seized Off Anegada

Just off the coast of Anegada, authorities from the U.S. Coast Guard, in collaboration with local authorities reportedly seized close to 4,000 pounds of cocaine worth $51 million last Friday, August 27.

The seizure, according to the U.S. Coast Guard was conducted following a routine nightly patrol by members. During that patrol, the authorities sighted a go-fast vessel located northeast of Anegada and pursued it.

As the authorities closed in, the perpetrators reportedly abandoned their contraband in the water and made good their escape on the vessel.

With the help of the US Coast Guard helicopter crew, they were able to recover 57 bales of cocaine.

“Despite the challenging sea state conditions and thanks to the close collaboration and coordination with our Royal Virgin Islands Police Force (RVIPF) partners, our crews did an outstanding job in disrupting a major shipment of cocaine and keeping it from ever reaching the streets," Magee said.

He added, "Our strong partnerships, as in the case of the British Virgin Islands and island nations throughout our area of responsibility, are key to achieving safe and secure maritime borders from drug trafficking and other smuggling threats in the Eastern Caribbean.”

“This is a great example of the close working relationship between the U.S. and the UK overseas territories. The excellent work of the U.S. Coast Guard forced the crew of the go-fast vessel to jettison their cargo.”

Detective Inspector Jones then pledged to continue the collaboration as they continue to fight illegal activities such as the movement of narcotics, illegal money and human trafficking.

Due to the porous nature of the BVI/USVI borders, as well as the strategic location in the Caribbean archipelago, it is a lure for drug and human trafficking.