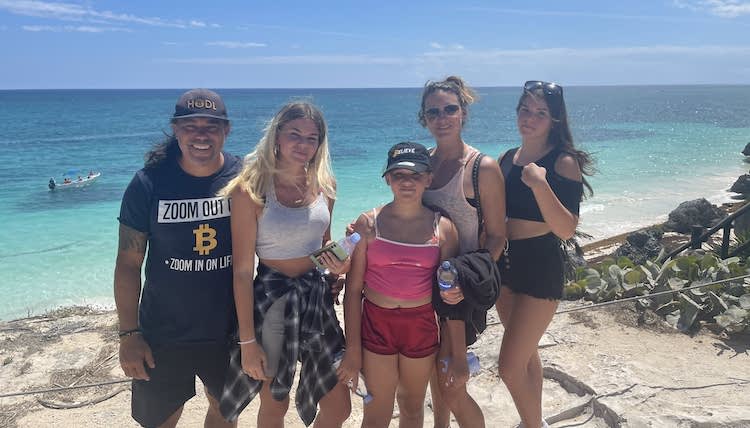 A Family Went All In When BTC Was $900, Store Their Fortune in Cold Wallets

The famous “bitcoin family” sold their house, and liquidated their assets in 2017 to buy more bitcoin. Didi Taihuttu shared with CNBC about his family's geographically distributed bitcoin in cold storage.

In an interview with CNBC, Didi Taihuttu, his wife and kids spoke about their geographically distributed bitcoin in cold storages. The famous “Bitcoin Family” sold their house, and liquidated their assets in 2017 to buy more Bitcoin to live off of.

The Dutch family’s cold storage hardware wallets are stored around the world in secret vaults.

“I have hidden the hardware wallets across several countries so that I never have to fly very far if I need to access my cold wallet, in order to jump out of the market,” explained Taihuttu, patriarch of the ‘Bitcoin Family’.

Taihuttu has two hiding spots in Europe, another two in Asia, one in South America, and a sixth in Australia.

We aren’t talking buried treasure – none of the sites are below ground or on a remote island – but the family told CNBC the crypto stashes are hidden in different ways and in a variety of locations, ranging from rental apartments and friends’ homes to self-storage sites.

“I prefer to live in a decentralized world where I have the responsibility to protect my capital,” said Taihuttu.

Didi also told CNBC that none of the hardware wallets are underground or on a remote island, rather they are all hidden in places such as rental apartments, self-storage sites, and friends’ homes.

Didi went on to explain that 26% of his bitcoin and other cryptocurrency was kept in hot wallets, and that with this money he day trades and gambles on altcoins. However, the rest of his bitcoin is in cold storage.

Bitcoiners emphasize the importance of, and often encourage people to take possession of their coins and to use cold storage self custody solutions, because, like Didi, they tend to find banks and other custodial services “just too risky.”

However, the family did report to be fans of third party custodians who use multisig setups for inheritance planning.

“They have beautiful setups for inheritance,” Didi told CNBC. “When you die, these companies handle that, as well, and I really believe they are doing a great job.”

This interview was released coincidentally on the same day that Representative Don Beyer (D-VA) introduced the Digital Asset Market Structure and Investor Protection Act, and just days after the senate rejected a proposed amendment to exclude U.S. Bitcoin entities from a “broker” designation.

These increased attempts at regulating a distributed hard money network show many congressmen believe citizens are not capable of assessing and mitigating the inherent risks of being the custodians of their own wealth, despite the fact that humans have been choosing and custodying their own hard stores of value for thousands of years.

Taihuttu doesn’t use banks or post offices. “I find it just too risky,” he said. “What happens when one of these companies goes bankrupt? Where are my bitcoins? Will I have access? You again put the trust of your capital in the hands of a centralized organization.”

“They have beautiful setups for inheritance,” he said. “When you die, these companies handle that, as well, and I really believe they are doing a great job.”

In this custodial arrangement, multiple parties all have to give consent in order for a transaction to go through.

This avoids the risk of storing private keys and authentication credentials in one single place, something known as a “single point of compromise.”

Source: A Family Went All In When BTC Was $900, Store Their Fortune in Cold Wallets – Fintechs.fi