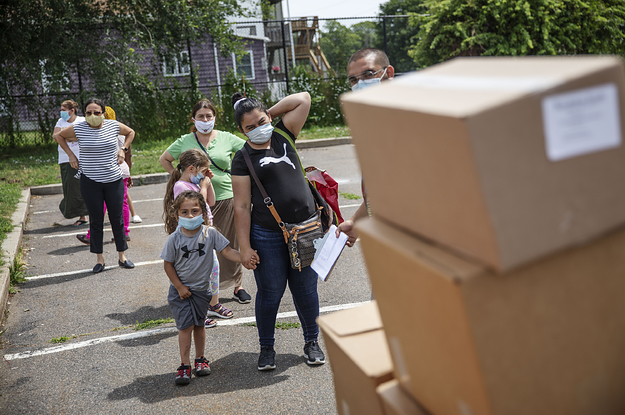 "As a direct result of the rule, immigrants are forced to make an impossible choice between jeopardizing health and personal safety or their immigration status," the judge wrote.
A federal judge in New York on Wednesday blocked the Trump administration from enforcing a policy during the coronavirus pandemic that allows the government to deny permanent residency to immigrants who officials believe are likely to use public benefits.

The ruling, issued by US District Judge George Daniels, is the latest in the back-and-forth legal saga over the “public charge” policy.

“Doctors and other medical personnel, state and local officials, and staff at nonprofit organizations have all witnessed immigrants refusing to enroll in Medicaid or other public funded health coverage, or forgoing testing and treatment for COVID-19, out of fear that accepting such insurance or care will increase their risk of being labeled a public charge,” Daniels wrote in his ruling. “As a direct result of the rule, immigrants are forced to make an impossible choice between jeopardizing health and personal safety or their immigration status.”

Daniels said the block is in effect for any period during which there is a “national health emergency in response to the COVID-19 outbreak.”

The New York attorney general’s office had gone to the Supreme Court in April with a request to block the public charge rule in light of the pandemic. The request, which was denied, came several months after the conservative Supreme Court justices voted to allow the Trump administration to implement the policy as a legal challenge continued in the federal courts.

“We secured an injunction to block the Public Charge rule from taking effect during the #COVID19 pandemic and while our legal challenge is pending,” New York Attorney General Letitia James tweeted. “This is a major victory to protect the health of our communities across New York and the entire nation.”

The Immigration and Nationality Act has long allowed the government to reject granting permanent residency to immigrants who were determined to be a financial burden on society, or a public charge, meaning they’re dependent on the government for financial support.

The Trump administration’s rule, however, altered how the government decides if someone is a public charge, allowing officials to deny green cards to those who are determined likely to use the Supplemental Nutrition Assistance Program (SNAP), Section 8 housing vouchers and assistance, public housing, or most forms of Medicaid. Experts have said that the policy will change the face of immigration and discourage people from seeking public benefits.

The effects on COVID-19 prevention due to the public charge rule are not speculative or hypothetical, the attorneys argued, citing multiple declarations from doctors, attorneys, and community advocates.