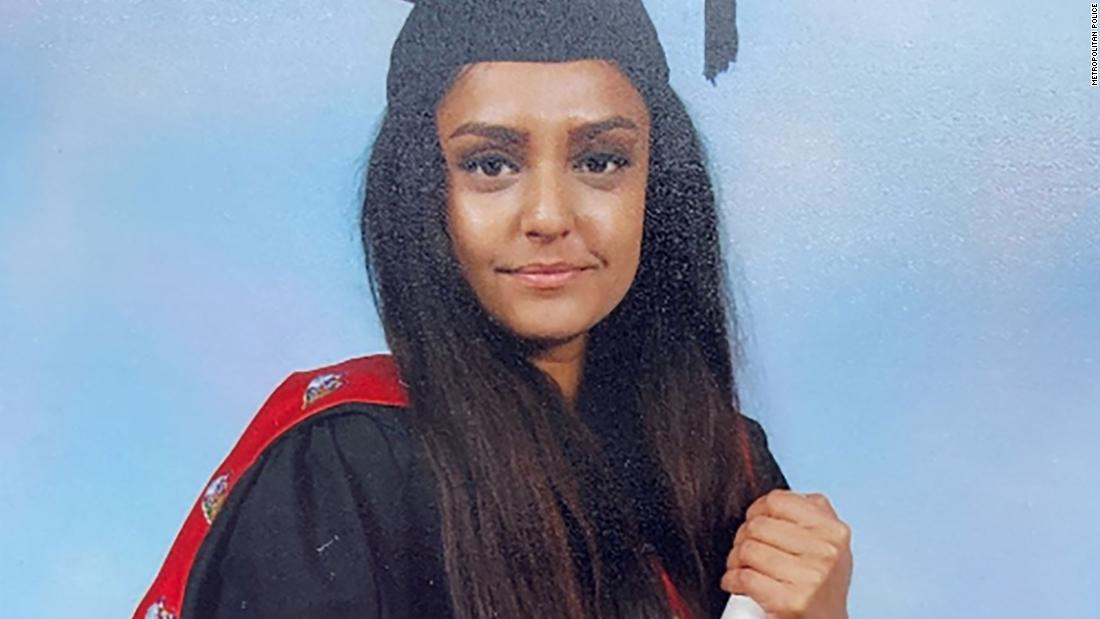 A London teacher was killed on a walk to the pub, police say. Another tragedy in the UK's gender violence epidemic

Sabina Nessa, a 28-year-old teacher from south London, is believed to have been murdered on the five-minute walk from her house to a pub, police say, sparking renewed outcry about the UK's epidemic of violence against women and girls.

London's Metropolitan Police has arrested a 38-year old man on suspicion of the murder.

In a statement on Thursday, the Met said the suspect had been arrested at an address in Lewisham. "He was taken into custody where he remains," the statement read.

Earlier in the day, the Met said Nessa had left her home in the borough of Greenwich just before 8:30 p.m. on September 17. Detectives believe that she was walking through Cator Park toward a bar in Pegler Square, where she had planned to meet a friend.

Police are also searching for another man in connection with Nessa's murder, having released a picture of him and of a silver vehicle they believe he has access to.

Nessa is thought to have been murdered on her journey through the park, the Met statement said, with her body found the following afternoon, close to a nearby community center.

"Sabina's journey should have taken just over five minutes but she never made it to her destination," Detective Chief Inspector Joe Garrity said, adding: "We know the community are rightly shocked by this murder -- as are we -- and we are using every resource available to us to find the individual responsible."

Garrity has appealed for anyone in the area of the park around the time of the attack to come forward.

Zubel Ahmed, Nessa's cousin, told ITV News on Wednesday that the family is still in shock, and that the news of her death has left them "devastated" and "inconsolable."

Nessa, who taught at a primary school in Lewisham, southeast London, was "truly the most kind, caring person out there," Ahmed said. "I don't understand how someone can do this, I really don't. It's a big, big loss to our family," he said.

Epidemic of violence against women

Nessa's death comes six months after the UK was left reeling following the assault and murder of 33-year-old Sarah Everard.

Everard went missing after leaving a friend's house in Clapham, south London, on March 3. Her body was found a week later, more than 50 miles from where she was last seen. Her killer, a serving police officer, pleaded guilty to her kidnap, rape and murder.

Everard's story prompted an outpouring across social media from women sharing their own experiences of sexual assault and harassment, catapulting the UK's damning record on violence against women and girls into the national spotlight.

More than 200 women were killed between March 2019 and 2020 in the UK, according to data from the Office for National Statistics and the Scottish government.

One woman is killed by a man on average every three days in the UK, according to data from the Femicide Census, an organization that tracks violence against women and girls. The group argues that the government's new strategy to curb such violence "shamefully ignores" victims of femicide.

Following Nessa's death, many are pointing out that little has changed. In a message posted to Twitter on Wednesday, Women's Equality Party leader Mandu
Reid said: "The media have been asking today: have things gotten better since Sarah Everard's murder? The answer is NO."

Reid added that the "muted" reaction from the press and a "lack of public outcry" for Nessa -- a woman of color -- "demonstrates, once again, that not all victims are treated with the same respect and reverence."

In the wake of Everard's murder, the UK media's problematic relationship with diversity and race was again put under the spotlight. Many activists and social media users drew a comparison between the coverage of Everard's killing and the death of a 21-year-old Black business student, Blessing Olusegun, which garnered little national media attention. Olusegun's body was found on a beach on England's south coast in September 2020. Her "unexplained" death was not treated as suspicious by local police.

On Thursday, Greenwich Council told CNN that they had handed out 200 personal alarms to women and vulnerable residents in the borough this week "following the horrific murder of Sabina Nessa."

The small device can be attached to keys and handbags or held, and activate a loud alarm in the event of an attack, a Greenwich Council spokesperson said in a statement, adding that the alarms have been distributed at events since 2019.

But women shouldn't have to be on the defense. A report from a police watchdog in July said that "radical," cross-sector reform is needed to protect women and girls from an "epidemic" of crime.

Police should make the "relentless" pursuit and disruption of perpetrators a priority, Her Majesty's Inspectorate of Constabulary and Fire & Rescue Services said.

Speaking on the Good Morning Britain program on Thursday morning, London Mayor Sadiq Khan said "we have to give this issue the same seriousness we give other issues," adding that it was time to "make misogyny a hate crime."

A vigil, organized by the group "Reclaim These Streets" will be held for Nessa on Friday at 7 p.m. at Pegler Square in Lewisham.