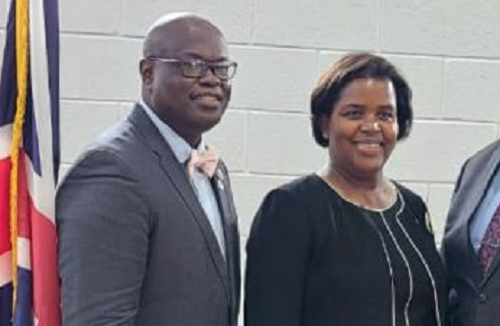 Commercial Court Judge [Ag] Mr Adrian Jack said whether a criminal offence was committed or not, or it is in the interest of the people of the Virgin Islands, Speaker of the House of Assembly Honourable Julian Willock must first have the permission of the Attorney General Honourable Dawn J. Smith to file an injunction against three of the Commission of Inquiry (CoI) lawyers.

The injunction was filed by Honourable Willock, and it is against lawyers Mr Bilal M. Rawat, Mr Andrew King and Ms Rhea Harrikissoon, who have been practicing law without being first called to the BVI Bar, to be prevented from practicing unless they are called to the Bar.

“It will be seen that practising BVI law in this Territory without being admitted to practice is a criminal offence with stiff minimum sentences. Whether a criminal offence has been committed and whether it is in the public interest for the offence to be prosecuted is normally a matter for the Director of Public Prosecutions and the Attorney-General.”

The Judge said, this claim in question appears to raise no private law cause of action on Mr Willock’s part, instead, he appears to be bringing the claim as part of his public duties as speaker of the House of Assembly.

“The papers filed to date do not, however, identify any statutory basis on which he might be acting. (In England, for example, local authorities can bring injunction proceedings of this type, but this is specifically permitted by statute.) There is no general power of public authorities to obtain such injunctions. So far as appears from the papers, Mr Willock has not yet requested the Attorney-General’s permission to bring the current proceedings. That is a matter which will need to be addressed at the hearing of the application on 2nd September. It is arguable that unless and until the Attorney-General gives permission Mr Willock has no standing to seek an injunction,” the judge argued.

Meanwhile, the judge said, Hon Willock’s language on the claim form needed to be changed.

“In both the amended claim form, the various applications and the three affidavits which Mr Willock has sworn, he refers to the Commission of Inquiry as “the Inquisition”. This in my judgment is inappropriate. Mr Willock no doubt has strong views on the legitimacy of the inquiry. The Court, however, requires parties before it to behave with civility to each other.

The Court will not tolerate abusive language of any description. Describing the Commission of Inquiry as an inquisition does not meet this standard.”

Tomas de Torquemada was the first grand inquisitor in Spain’s movement in the late 15th century who was responsible for the death of thousands of Jews and suspected witches during the Spanish Inquisition.

“The Court will not entertain political point scoring by litigants before it. Accordingly, I shall give permission to the claimant by 4 pm on 1st September 2021 to amend his claim form and applications so as to substitute “commission” in place of “inquisition.”

In default of the above amendment, the claim will be stuck out.

“I shall also strike out the claimant’s three affidavits but permit him by the same time to re-swear and file them on the e-Litigation Portal, but with the amendment which I have stated. Because this order is made ex parte, the claimant has the right to apply to the Court to vary or discharge this order,” he remarked.

Hon Willock and Deputy Speaker Hon. Neville Smith (AL) are objecting to the three lawyers to apply to be called to the VI Bar, having already breached the Legal Profession Act of 2015.

Queens Counsel and former Deputy Judge of the Eastern Caribbean Supreme Court, Mr Michael J. Fay has sided with Mr Willock's position- that the CoI lawyers are in violation of the Legal Profession Act.

Mr Fay also believes the lawyers should not be allowed to continue doing legal work in the VI.

Additionally, Mr Fay has pointed out that breach of the Legal Profession Act could result in criminal charges being laid.