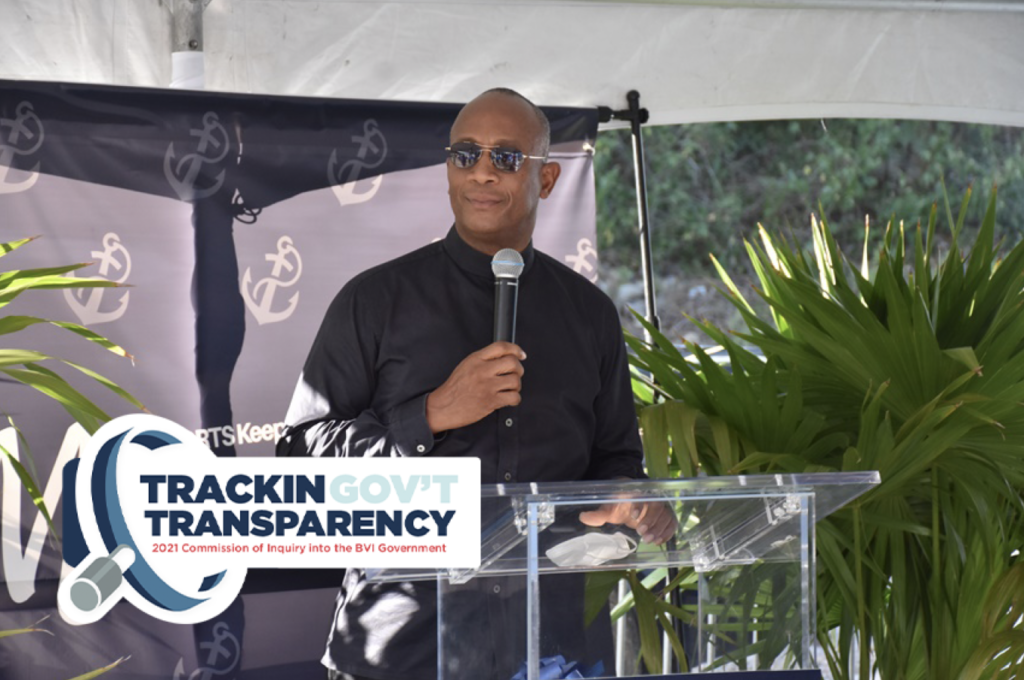 Following the stunning revelation of a contractual error that resulted in Claude Skelton Cline gaining thousands of unearned dollars at the government’s expense, the Premier’s Office adopted a policy that requires the Attorney General to screen all its contracts.

According to Elvia Smith-Maduro who is the Deputy Secretary in the Premier’s Office, Pastor Skelton Cline was engaged in a six-month government contract issued in 2019 just after the new Andrew Fahie-led Virgin Islands Party (VIP) administration took office.

Smith-Maduro told the ongoing Commission of Inquiry (COI) that it was her understanding that Skelton Cline would be acting as Premier Andrew Fahie‘s personal advisor as part of the terms of his contract.

Skelton Cline‘s contract — the details of which were entirely kept out of the public domain up till recently — outlined that he be compensated $16,330 per month for his services. This was in addition to a sum of $350 per month for expenses and any additional travel and accommodation expenses that might arise.

Gross oversight on our part

As part of his contract, Skelton Cline was also offered a five percent tax-free gratuity of his gross salary, upon satisfactory completion, the Commission was told.

It was this aspect, Smith-Maduro explained, that showed Skelton Cline was issued a contract based on a template that should’ve instead been for a government employee, and not an external contractor.

Because of this, Skelton Cline was able to receive vacation days and other benefits that he would not have ordinarily received on any of his previous or future contracts.

When told by the COI that this meant that Skelton Cline was given a major contract, Smith-Maduro told the COI that it was never the intent.

“What I would say to that is that it was never intended to be there. It was gross oversight on our part. We never intended for the contract to go over the hundred thousand [mark], so it was treated squarely as a petty contract,” she explained.

The effect of the glaring error meant that he was now paid $102,879 instead of the nearly $98,000 that was initially agreed upon for the short term contract.

Smith-Maduro agreed that this effectively put his contract over the petty contract limit.

Government’s petty contract limit is capped at $100,000 per contract, anything above this, means that the contract is a major contract and must be put out for tender.

“Hindsight is always 20/20 and so from that experience, we have since adopted having the Attorney General vet all our contracts before we sign them just to make sure that we don’t have anything in there that should not be in there and we don’t miss important clauses such as those,” the Deputy Secretary told the COI.

CSC claimed gratuity even after clause was left in error

After the discovery was made very late into the contract, Smith-Maduro said she was unsuccessful in her attempts to have Skelton Cline forego claiming those monies that he would not have ordinarily been in receipt of.

But according to Smith-Maduro, after explaining the dilemma to Skelton Cline, the clergyman insisted that he be paid whatever monies were owed to him based on the contract that he signed.

“And that was his response, ‘I signed the contract, it’s in there, I want to be paid as per the terms of the contract,’” Smith-Maduro said of her interaction with Skelton Cline.

These latest developments about Skelton Cline’s agreemnet with government follows previous reports coming out of the COI that there were also other irregularities with his contract.