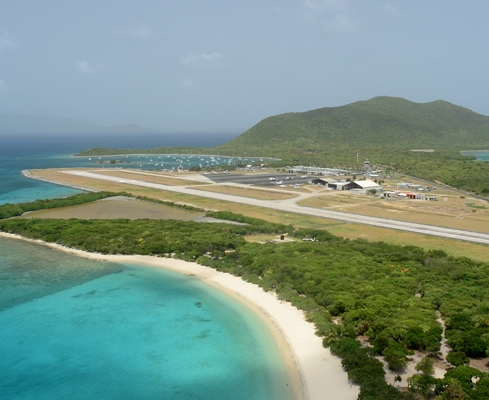 A taxpayer-funded report from an Atlanta-based consultant engaged in December to assess the future of air transportation in the Virgin Islands is “before the [BVI Airports Authority] board and not for public consumption at this time,” BVIAA Chairman Bevis Sylvester wrote in an email to the Beacon last week.
He did not respond to follow-up queries asking for a timeline for releasing the report, or say how much the BVIAA paid the consultant or whether the job was tendered.

The firm, Brakkam Aviation Management, was founded by company CEO and President Miguel Southwell, a former general manager of the Atlanta International Airport who was fired in 2016 amid a public spat with the city’s mayor, according to the Atlanta Journal-Constitution.

The BVIAA’s contract with the firm resulted in a “six-month interim report” that made various recommendations, including suggestions for expanding the airport runway, Premier Andrew Fahie said last month in the House of Assembly.

The effort, he insisted, should not be an immediate priority at a time when so many urgent hurricane-recovery projects were not completed. He has since changed his tune, however, and earlier this month, he disclosed that his government apparently had gone back to the drawing board by hiring Brakkam, which recommended options that Mr. Fahie said would allow for
building a new runway “without much land reclamation.”

“This will allow for the construction of a 9,100 linear foot runway at an estimated probable cost of $183.78 million,” the premier told the HOA, adding that a shorter runway of 7,250 linear feet would cost approximately $150.65 million.

Working with the BVI Airports Authority, he said, the government hopes to expand the airport and runway to attract longer-range flights and larger aircraft that can present more viable connections to the United States mainland and beyond.

Mr. Fahie’s explanations about the need for the airport expansion echo the arguments made by his predecessors in the National Democratic Party-led administration of then-Premier Dr. Orlando Smith.

Dr. Smith’s government started working toward the expansion at least as early as 2012 and spent millions on related studies, consultations and infrastructure works.

In 2016 his government chose China Communications Construction Company as its “preferred bidder” to undertake the expansion after receiving a final bid of about $153 million.

For reasons that were never clearly explained, however, the plan stalled even as elected officials continued to insist that it was still in the works.

While campaigning for the February 2019 election, Mr. Fahie announced that his Virgin Islands Party was “not in support” of the proposed airport expansion at the time, calling it a “legacy project to [Dr. Smith].”

If the VIP were voted into office, he said, it would focus instead on expanding ferry service and hosting more events designed to attract tourists. He added, though, that a VIP administration might revisit the expansion at a future time.