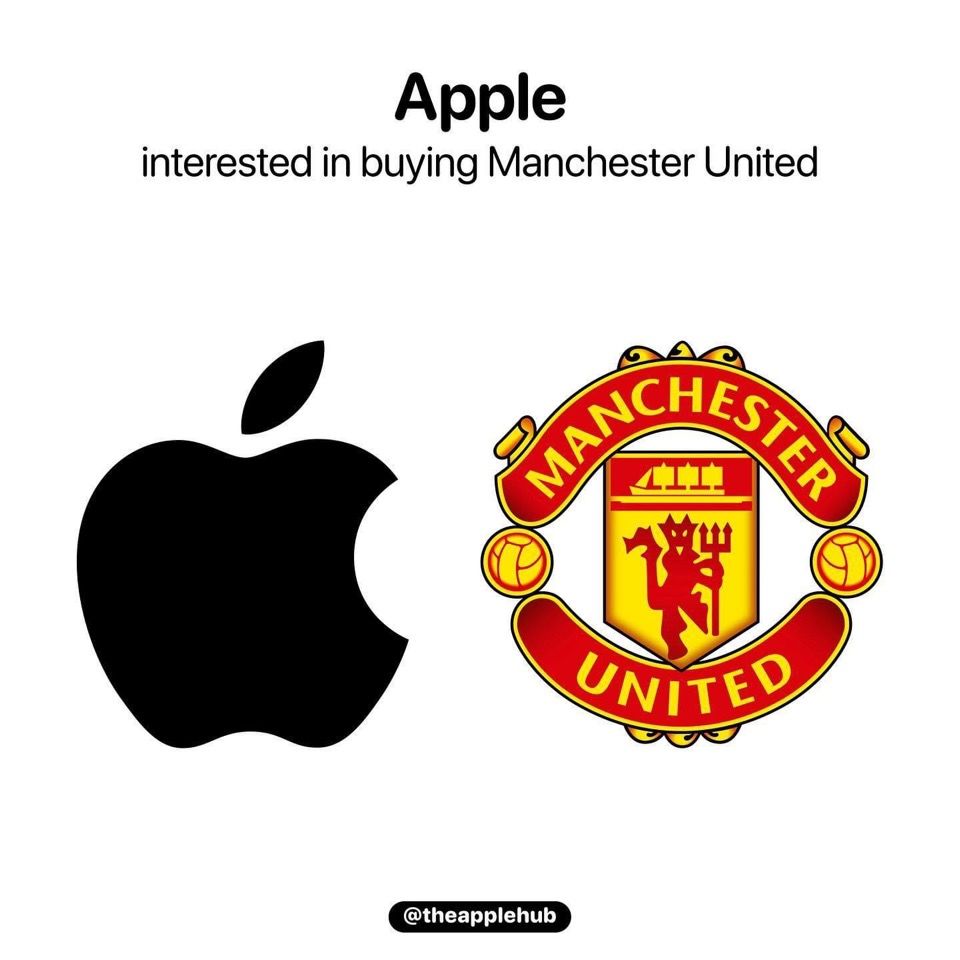 Apple are 'interested in buying Manchester United in £5.8BILLION deal'

Apple are interested in buying Manchester United in £5.8BILLION deal - and the tech giants will revamp Old Trafford if they win the huge bidding war after the Glazers decided to sell. The California-based tech firm has never previously owned a sports team, but commercial opportunities provided by United are said to be a major factor in their interest.
US tech giant Apple has joined the race to buy Manchester United, according to reports.

United confirmed the sensational news that the world's biggest football club is effectively for sale in a statement issued earlier this week.

With United now available, a report from the Daily Star has claimed that the world's largest tech company may be interested in acquiring the club for £5.8billion.

The California-based tech firm has never previously owned a major sports team, but the commercial opportunities provided by United are said to be a primary factor in their interest.

Any potential deal would almost certainly become the most costly acquisition of a football club in history, surpassing the £4.25billion fee a consortium led by Todd Boehly paid for Chelsea earlier this year.

One major issue facing whomever buys United is Old Trafford, the club's iconic stadium. The venue has long needed a revamp to compete with the biggest clubs around the world.

It is understood that rebuilding the stadium will cost approximately £1.5bn, making it the most expensive football ground in the world - ahead of Tottenham's new £1bn stadium.

United moved into the ground - dubbed 'The Theatre of Dreams' by fans around the world - in 1910 and have called it home ever since. The stadium was most recently renovated between 2005 and 2006, with 8,000 seats being added.

Red Devils legend Gary Neville has backed calls for the stadium to be rebuilt entirely, when stories first emerged of investment into the arena back in February.

He posted on Instagram: 'There is a story emerging from Old Trafford that they might rebuild the entire stadium and I have just been asked what I think of it. I actually think that it would be the right move.

'I think by the time that they have spent money on Old Trafford, the existing one, then I think you would be better off building a brand new, better, super stadium. I do think that Manchester United should always be at the forefront of stadiums, have the best facilities and they have fallen behind.'

CEO Cook is just the latest in a line of high-profile individuals who have shown an interest in taking charge at Old Trafford.

Now-Twitter CEO Elon Musk jokingly wrote on the platform this summer that he would be purchasing the club, with the 51-year-old's post garnering more than 800,000 likes.

UFC superstar Conor McGregor has also thrown his hat into the ring, having previously expressed an interest in taking over the club.

The 34-year-old took to Twitter following the announcement of the European Super League in April of last year, writing: 'Hey guys, I'm thinking about buying Manchester United! What do you think?'

The Irishman added that he would like to acquire a sports team 'at some stage'.

'A conversation came up regarding Celtic first to be honest. To acquire shares from Dermot Desmond. I am certainly interested in acquiring a sports team at some stage! Both Celtic and Man United are teams I like for sure. But I am open. I feel I could do big things for a club.'

Joel and Avram Glazer have been largely unpopular among fans since taking charge of the club in 2005.

Backlash over the American investment bankers' takeover of United was such that some supporters formed the breakaway club FC United of Manchester in protest.

Dissatisfaction over the running of United also led to the green and gold movement with fans donning scarfs depicting the club's original colours, and resulted in series of protests being staged both inside and outside of Old Trafford.

A club statement from Tuesday outlined the Glazers' intentions to sell: 'Manchester United plc (NYSE:MANU), one of the most successful and historic sports clubs in the world, announces today that the Company's Board of Directors (the 'Board') is commencing a process to explore strategic alternatives for the club.

'The process is designed to enhance the club's future growth, with the ultimate goal of positioning the club to capitalize on opportunities both on the pitch and commercially.

'As part of this process, the Board will consider all strategic alternatives, including new investment into the club, a sale, or other transactions involving the Company.

'This will include an assessment of several initiatives to strengthen the club, including stadium and infrastructure redevelopment, and expansion of the club's commercial operations on a global scale, each in the context of enhancing the long-term success of the club's men's, women's and academy teams, and bringing benefits to fans and other stakeholders.'
#Elon Musk