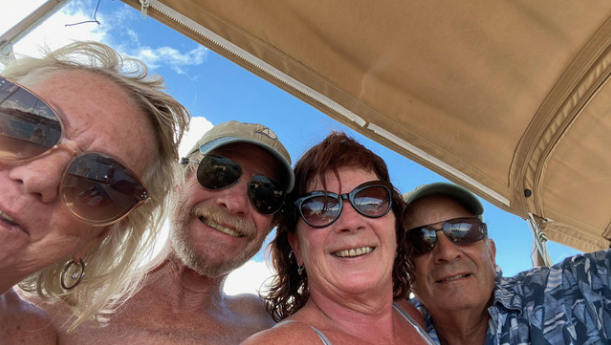 After being arrested in the waters near Jost Van Dyke on Nov. 19 and held in custody for 11 days, four American tourists had their first appearance in Magistrates’ Court on Tuesday and pleaded guilty to landing in the territory without leave from an immigration officer.

Before that, however, their arrest made international headlines just as the territory was preparing to reopen its borders to tourists this week.

Magistrate Christilyn Benjamin fined the four $1,000 each, but because they had already spent almost two weeks in custody she said she had decided “not to impose a further custodial sentence.”

The charge carries a maximum penalty of a $1,000 fine and 12 months behind bars, Ms. Benjamin said.

Tuesday’s matter — which was held virtually via Zoom —was initially set as a bail hearing, but after Ms. Benjamin denied attorney David Penn’s application for bail and announced that the subsequent trial could potentially spill over into February or March, Mr. Penn requested that his clients instead enter their pleas and proceed to sentencing.

Ms. Benjamin said their early guilty plea factored into her decision not to impose any additional custodial sentences, as did the fact that all of the defendants had previously clean criminal records and are 61 or older.

During Mr. Penn’s unsuccessful bail application, he noted that his clients claimed to have entered VI waters by accident; that they are senior citizens; and that the borders had reopened to tourists since their arrest.

Accordingly, he asked that they be released on bail with a $5,000 bond and an allowance to leave the territory.

“We are asking that … they be permitted to leave with the understanding that they will return either personally or via videolink to answer for the allegations laid before the court,” Mr. Penn said.

But Crown Counsel Kristain Johnson contended that the defendants have no connection to or legal status in the territory, and therefore are “flight risks” and should not be granted bail. After deliberating for about 15 minutes, Ms. Benjamin sided with the Crown and denied the bail application, reiterating Mr. Johnson’s points and adding that the Covid-19 pandemic could create unexpected obstacles for the defendants’ return to the territory.

Before the defendants entered their pleas, Mr. Johnson read the prosecution’s allegations. According to the prosecutor, customs officers received word of a sailboat travelling from St. John towards Jost Van Dyke at about 1:30 p.m. on Nov. 19.

At approximately 2:04 p.m., officers with the Joint Border Patrol Task Force approached the boat and informed the passengers and the captain that they had entered VI waters and had broken the territory’s laws, Mr. Johnson alleged.

The customs officers then asked Mr. Cancro to proceed to Sopers Hole, where the water was calmer, and then they sailed to the police marine base at Road Harbour.

There, the prosecutor said, Mr. Cancro was “detained by the police” and “then interviewed” by “senior officers.”

The Americans “were then informed of the offences for which they had been charged,” Mr. Johnson added.

In response to the Crown’s allegations, Mr. Penn claimed that Mr. Cancro, who lives on his boat in St. John for roughly half of each year, was hosting his friends on vacation when they accidentally crossed the narrow passage between St. John and Tortola.

After realising his mistake, Mr. Cancro started to head back towards St. John, but was intercepted by the task force officers while sailing towards USVI waters, Mr. Penn claimed. “Mr. Cancro has been a visitor to British Virgin Islands and the United States Virgin Islands for many years. There was absolutely no intention on the part of Mr. Cancro to enter into the British Virgin Islands, and … on close examination of this matter, the court may very well be satisfied that there was no criminal offence on this matter,” Mr. Penn said.

The attorney added that Mr. Cancro, 71, is a retired electrical engineer, while Ms. McKinnon, 68, who has been a teacher for over 40 years and resides in Puerto Rico, is currently being treated for cancer.

“Presently, Ms. McKinnon is just about out of her medication, and needs to return to Puerto Rico to continue to get her necessary medication,” Mr. Penn added.

He also said that Ms. Hines, 61, is a retired medical instructor, and her husband Mr. Hines, 68, is a veteran of the US Navy and an electrical power systems engineer.

Since their arrest on Nov. 19, the four Americans went almost two weeks without receiving “due process,” Mr. Penn alleged.

“Certainly I do not have to explain that this is a violation of their rights under the law,” he added.

In an interview for a Nov. 27 broadcast by WJLA, an ABC News affiliate near Washington DC, Ms. Hines said that after the group was detained, customs officers took their passports and boat documents, and informed them that they were being charged with illegal entry and arriving at a place other than a customs port.

After Mr. Cancro was served a Nov. 19 notice of detention — which was shown during the newscast — officers informed the Americans that Mr. Cancro could pay $20,000 to ensure their release from the territory, but would not accept their credit cards, the newscast reported, citing interviews with the Americans.

“We’ve been cooperating 100 percent and it’s been very frustrating because we explained our story … in greater detail, of course, and of course it falls on deaf ears,” Mr. Hines told the news channel.

WJLA also reported that the defendants said they were confined to a single hotel room, and had to be moved to another one after a sink fell off a wall in the bathroom.

As the territory prepared to reopen its borders to tourists in recent days, several other international news outlets also carried the story, from the Independent in the United Kingdom to Fox News and the New York Post in the US.

During the Nov. 27 broadcast, WJLA said its attempts to reach VI officials had been unsuccessful, but two days later Director of Public Prosecutions Tiffany Scatliffe-Esprit released a statement calling the television report “erroneous,” though she didn’t specify what exactly the reporter got wrong.

“On 19th November, 2020, four persons were apprehended by the Joint Task Force, particularly customs and immigration officers,” the DPP wrote.

In keeping with the public health laws drafted to prevent the spread of Covid-19 in the territory, she added, “The four individuals have been placed on mandatory quarantine for a period of 14 days at a local hotel.”

‘Cared for with BVI LOVE’ Ms. Scatliffe-Esprit also explained that “the matter was submitted” to her office the morning of Nov. 27, after which it “was processed and forwarded to the Magistrates’ Court” for an early hearing.

“All four persons are safe and are being cared for with BVILOVE and with the finances of the government and people of the Virgin Islands,” she wrote, adding, “The allegations being circulated by the press and persons are without merit and can easily attract civil and criminal liability.”

Attempts to interview customs and immigration officials were not immediately successful.