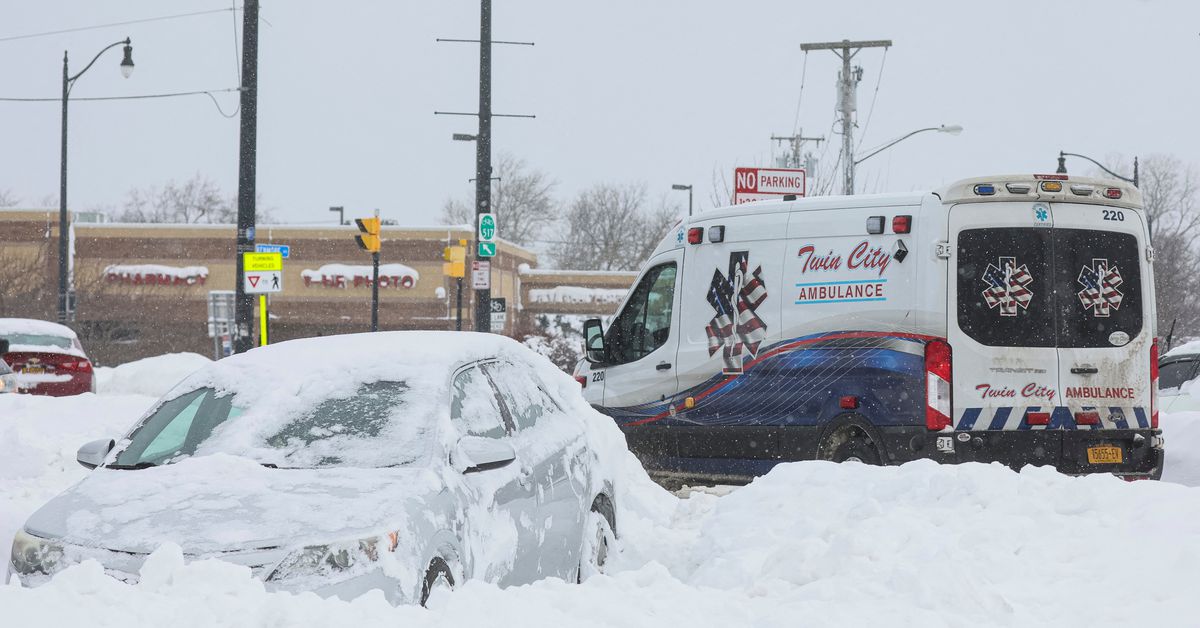 A blizzard that paralyzed western New York over the Christmas weekend has killed more than two dozen people, local officials said on Monday, as crews struggled to dig out the snow-bound region around Buffalo from its fiercest winter storm in decades.

With snow continuing to fall on top of more than 4 feet (1.2 meters) dumped on Buffalo since the blizzard took shape on Friday, New York's second-largest city stood as ground zero for a storm the governor called an "epic, once-in-a-lifetime" weather disaster.

The toll of confirmed storm-related deaths climbed to 27 in Buffalo and the rest of Erie County on Monday, from 13 the night before. The fatalities included cases of people found in snow banks and in cars or who had died from cardiac stress while plowing or blowing snow, county executive Mark Poloncarz said.

The county issued a "Shovel Smart" alert warning that the over-exertion from "shoveling heavy, wet snow can cause back injuries and heart attacks."

At least 60 lives have been lost in weather-related incidents nationwide, according to an NBC News tally, from an arctic deep freeze and sprawling storm front that extended over most of the United States for days, as far south as the Mexican border.

The larger storm system has wreaked havoc with travel across the country over the holiday weekend, stranding passengers as thousands of flights were canceled.

The greater Buffalo region, on the edge of Lake Erie near the Canadian border, was hardest hit.

Nearly 50 inches (1.27 meters) of snow was measured at Buffalo Airport as of Monday morning, according to the National Weather Service.

Although blinding winds that created white-out conditions for more than two days had abated by Monday, snow kept coming down, with accumulations of up to a foot (30 cm) more forecast through Tuesday in areas south of Buffalo and north of Syracuse.

Despite a ban on personal road travel that remained in effect on Monday, hundreds of motorists had to be rescued from their vehicles over the weekend

A few of the grocery stores that had been closed for days reopened on Monday, and people trekked more than a mile (1.6 km) through the middle of otherwise impassable streets to get there.

The severity of the storm, notable for a region accustomed to harsh winter weather, grew out of a combination of meteorological factors that supercharged one another.

Howling winds, numbing cold and "lake-effect" snow - the result of moisture picked up by frigid air moving over warmer lake waters - produced a storm that New York Governor Kathy Hochul said would go down in history as "the Blizzard of '22."

She and local officials ranked it as the worst Buffalo-area snowstorm since a 1977 blizzard that killed nearly 30 people.

"My heart is with those who lost loved ones this holiday weekend. You are in my and Jill's prayers," Biden said in a Twitter message earlier in the day.

Poloncarz said many emergency workers had themselves become trapped in the snowy onslaught over the weekend, requiring special teams to be dispatched "to rescue the rescuers."

Thousands of people in Erie County had power restored as of Monday morning, Poloncarz said, though some 14,000 customers were still without power statewide, according to poweroutage.us.

Poloncarz pleaded for motorists to heed the driving ban in order to keep free of traffic those narrow street routes that had been cleared for emergency and utility workers trying to weave through an obstacle course of buried cars and snow banks.

"There are cars everywhere, everywhere, pointing the wrong direction on roads. They've basically been plowed in and they need to be dug out and towed. It's going to take time to clear those," Poloncarz said.