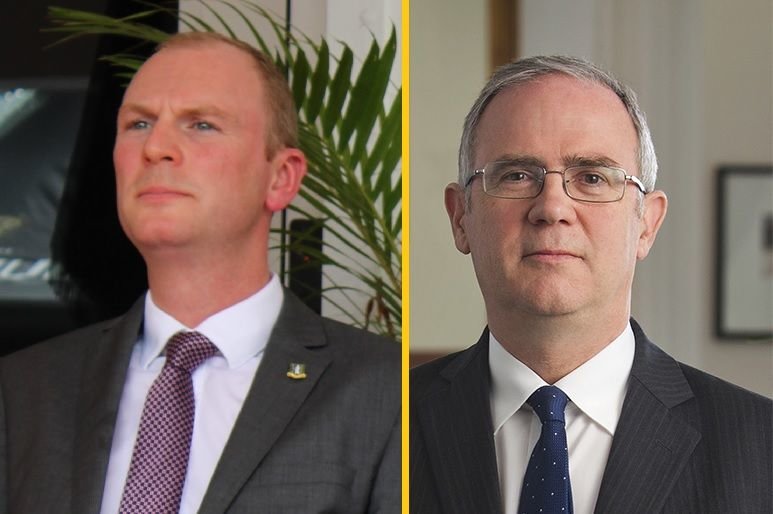 Augustus J. U. Jaspert Out! John J. Rankin In! as VI Governor

As the controversial Governor Augustus J. U. Jaspert continues to come under fire for what has been termed as callous and racist statements regarding reparations for slavery in the Virgin Islands (VI), a new Governor of the VI has been announced.

According to the United Kingdom Government, Mr John J. Rankin, CMG, who is currently serving as Governor of Bermuda, will replace Mr Jaspert, who exits the VI this year-end.

Mr Jaspert, who has become unpopular for saying that the Virgin Islands should not expect any reparations for the evil acts of slavery and has defended the keep of names of landmarks named after perpetrators of slavery, torture, murder, rape, plunder and genocide, came to the Virgin Islands in 2017 and had requested an extension for an additional year.

The UK appointed Governor was also accused of interfering with the legislative branch earlier this year when he tried to dictate to the House of Assembly (HoA) to meet so he would not miss the deadline for the laying of the BVI Airways Report in the HoA.

Veteran legislator Honourable Julian Fraser RA (R3) subsequently brought a motion to the HoA seeking to have the Governor reprimanded for the delay of the report; however, the motion was defeated.

Meanwhile, Governor Jaspert has since announced the name of the new Governor and his coming exit from the VI on the Facebook page of the Governor’s Office.

“The new Governor will be John Rankin CMG. Mr Rankin has more than 30 years of experience in the public service, most recently serving as Governor to Bermuda. He will start as Governor to BVI in the new year. After discussions with Mr Rankin, I felt that a new Governor should have time to settle ahead of a new financial cycle, hurricane season and other opportunities and challenges that 2021 may bring. Mr Rankin will be an excellent Governor to the Virgin Islands.”

Prior to his appointment as Governor of Bermuda in 2016, Mr Rankin, 63, served as Acting Director, Americas Directorate at the Foreign and Commonwealth Office and has also worked in India and the Maldives as a UK diplomat.

Mr Jaspert also said he was grateful to have his appointment extended so he could stay on to help the Territory plan and deliver immediate response to the unprecedented circumstances faced this year.

“In the next months, I remain firmly focused on the key issues facing the Territory. This includes helping the Territory to implement the next phases of the COVID-19 response; continuing hurricane preparedness work throughout the season; improving our security and justice systems so they continue to deliver for the people; and supporting good governance and public sector transformation. I will also be working to ensure a smooth transition to my successor in the New Year.”

Governor Jaspert said the UK and the Office of the Governor will continue to stand by the people of the VI and said he hopes the brightest future for these “incredible islands and all communities who call them home.”