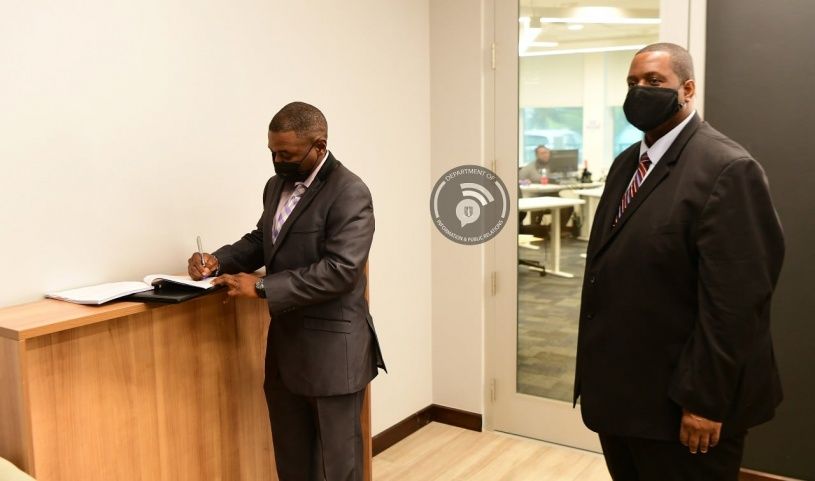 The Government of the Virgin Islands, through the Recovery and Development Agency (RDA), has inked a major contract with Autland Heavy Equipment Co. Ltd to conduct a slope stabilization and road rehabilitation project at Long Trench.

The project is being funded through the Caribbean Development Bank (CDB) $65 million loan.

A Commitment to the People

Premier and Minister of Finance, Hon. Andrew Fahie said the contract signing ceremony was a commitment to the people of the Virgin Islands.

“We are a Government that cares for our people; we believe that it is important to always improve what we have. We are not only in a hurricane zone, but hurricane season is here.”

He continued: “I look forward to the project being completed in four months of the start date and being completed on time and with quality, which we have come to know with your company.”

Representative of Autland Heavy Equipment Co. Ltd., Mrs. Dawn Crabbe-Herbert responded, stating that the company was “truly grateful to be a part of the restoration efforts in the Virgin Islands.”

“We have been working on CDB projects from inception and have benefitted from the capacity building efforts of the RDA and their many trainings. We are grateful to have been selected for the execution of the Long Trench Road Rehabilitation Slope Stabilization Project.”

In the meantime, Ag. CEO of the RDA, Mr. Anthony McMaster said he was pleased that the RDA can continue to fulfill the mandate that has been placed on it by the Government of the Virgin Islands with the rebuilding of the territory following the hurricanes Irma and Maria in 2017.

“We are pleased to report at present, we have just under $25.5 million worth of projects which are under implementation or that have been implemented thus far through the RDA. Today, we are pleased to add two additional contracts, first the West End Ferry Terminal jetty valued at $1 million thereabout, and now we are about to sign a second contract valued at roughly $1.8 million, bringing our total contracts to date to $28.3 million.”

He continued: “I think that is quite a substantial amount of money being injected into the local economy over the last few years. It is a pleasure that I am also able to report that of the works issued to date, 89 percent of those works have been to local establishments, five percent to the regional partners and six percent to international firms who have opted to work with us here in the territory on the rebuilding and restoration of our country.”