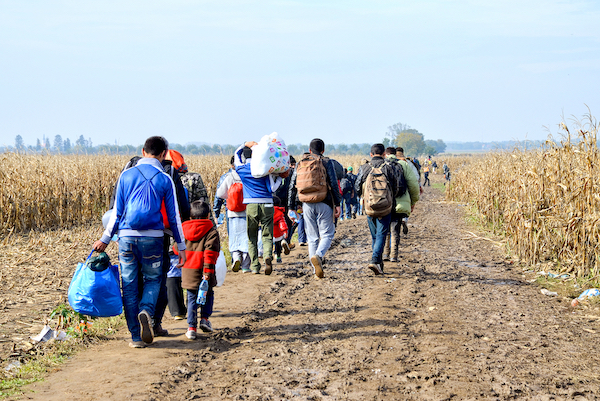 The migrant-smuggling business in Western Balkan countries is worth at least 50 million euros a year, the Global Initiative Against Transnational Organized Crime NGO said in a report published on Monday.
The report assesses the money being made by smugglers in the three key smuggling zones in the Western Balkans – the borders between Greece’s borders with North Macedonia and Albania; the border between Bosnia and Herzegovina and the EU in Croatia, and Serbia’s borders with Hungary and Romania.

However, it says that the amount being made could be even higher, as some migrants travel to the EU by other means, such as from Albania to Italy by boat.

According to the report, the first major smuggling zone is where most migrants and asylum-seekers enter the Western Balkans – from Greece, either around Gevgelija in North Macedonia or near Kakavia and Kapshtica in Albania.

“In total, in 2020 the migrant-smuggling business at the main entry points to the Western Balkans at the borders between Greece and neighbouring North Macedonia and Albania can be estimated to be in the range of €19.5 to €29 million,” the report says.

The second major smuggling zone is in Bosnia and Herzegovina, “particularly around the city of Bihac in Una-Sana canton”, it continues.

“Our estimate is that the market in this region was worth around €7 million to €10.5 million in 2020, the vast majority of which was generated in Una-Sana canton,” it says.

The main hotspots for migrant-smuggling in the third zone at the Serbian border are “Horgos, the area around Subotica, Sombor, tunnels in the Kelebija area and across the Tisza River for those people moving east towards Romania and then back into Hungary”.

The report identifies various types of smugglers present in the Western Balkans, describing them as fixers, gatekeepers and package dealers.

It says fixers, who arrange transport, “usually operate within the borders of one country”.

The report described people who operate around borders and charge for “safe passage” as gatekeepers. It notes that “the most organised and lucrative forms of smuggling appear to be around the borders that are the hardest to cross: between Greece and North Macedonia; North Macedonia and Serbia; Serbia and Hungary; and Croatia and Bosnia and Herzegovina”.

“The criminal groups at these locations seem to be a mix of locals with a knowledge of the terrain and the movements of the police, as well as nationals of countries where the asylum seekers and migrants originate (like Afghanistan, Pakistan, Morocco and Syria),” it says.

Prices paid to gatekeepers are generally higher than those paid to fixers, because they help asylum-seekers and migrants to move across borders and to circumvent natural barriers like rivers and mountains. The report says that “the cost may include other benefits, such as a temporary safe haven”.

“For instance, migrants pay approximately €2,500 to travel from Subotica in northern Serbia to a settlement near the Hungarian border where they were accommodated in abandoned farmhouses and factories before being smuggled into Hungary,” it explains.

But the big money from migrant-smuggling made through ‘package deals’, the report says.