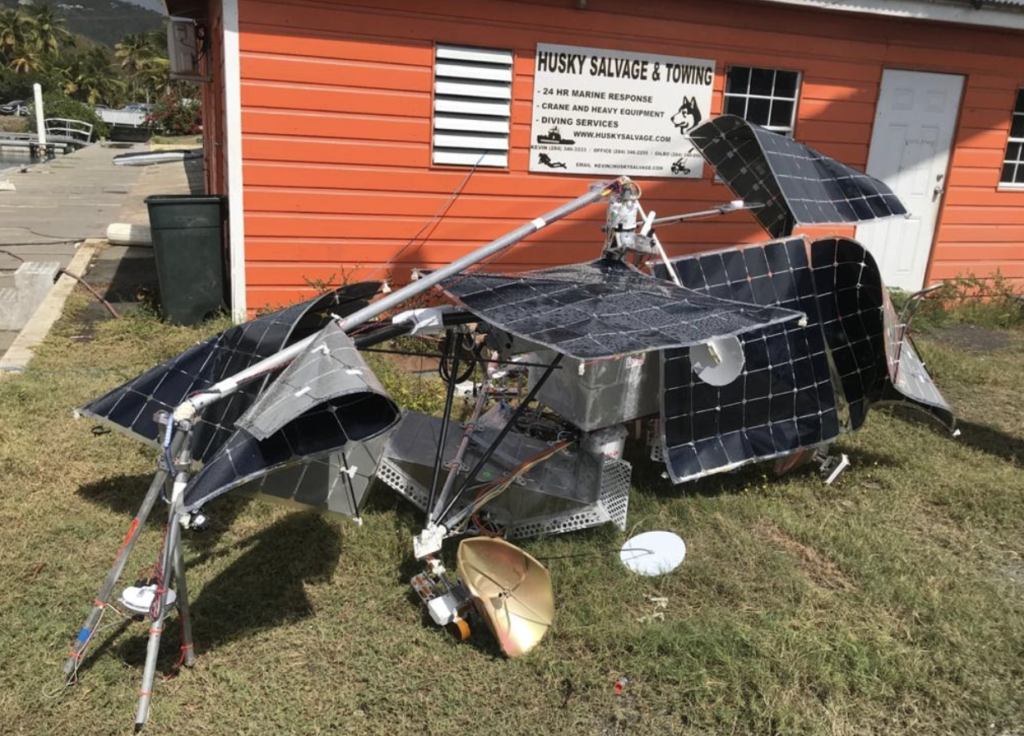 A bizarre sighting of what appeared to be a balloon satellite, caught some residences by surprise after landing in the waters of the British Virgin Islands on Friday, January 29.

According to reports received by our news centre, the balloon satellite which is also referred to as a loon, descended in the vicinity of Guana Island before it was retrieved and brought to Nanny Cay.

Speaking to BVI News following the circulation of the many images which created a buzz across the territory, a local aviator who opted to remain anonymous, dispelled any rumours which suggested that the satellite device landed into the BVI from outer space.

He said: “I know it is not a satellite per se … What a typical satellite would do is they would be orbiting so high above the earth that if they were to fall; that is why we see what we call a shooting star. It burns up on the reentry into the earth’s atmosphere.”

“As you can see from the pictures that this item is not burnt or damaged by any sort of heat process, you can see that all the panels are all intact,” he added.

Could have been collecting weather data

While not 100 percent certain as to the origins of the device, the aviator said that based on his experience, it could possibly be a balloon satellite that was collecting various weather data across the Caribbean region.

“What that tells us is that where ever it was orbiting it was within the earth’s atmosphere and what I know about those things as an aviator, I know they launch some weather balloon from Puerto Rico and they fly about 60,000 feet, which is way above the height flown by normal passenger aircrafts such as JetBlue for example which fly about 35,000 feet,” he explained.

“These balloons I see them on my tracker, they leave from Puerto Rico and they come all the way up to the Virgin Islands, they go down the Caribbean and then they go back. There is apparently something up there collecting weather data and so I want to believe that this object is one of those that forever reason it crashed,” the aviator further said.

Speculation of device being a loon

In the meantime, further speculations from other residents suggested that the device is a loon balloon satellite instrument which is a network of stratospheric balloons designed to bring internet connectivity to rural and remote communities worldwide.

While BVI News has no evidence to either substantiate of refute the speculations, these types of balloons usually work by beaming internet connectivity from ground stations to an overhead balloon.

The signal which is generated is subsequently sent across multiple balloons, creating a network of floating cell towers that deliver connectivity directly to a user’s LTE-enabled device below.