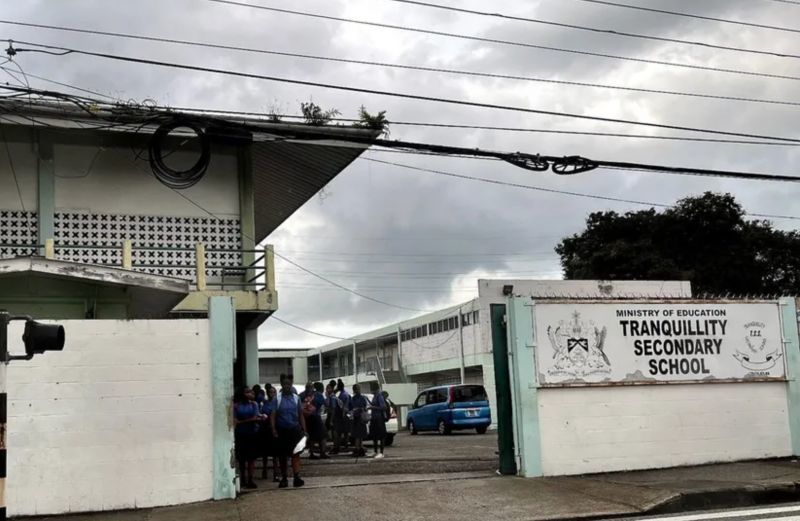 The principal of Tranquillity Government Secondary School in Port of Spain was dragged to the ground as she attempted to break up a brawl among several female pupils of the school on Friday.
The pupils involved in the fight have been suspended, Education Minister Dr Nyan Gadsby-Dolly confirmed yesterday. “However, depending on their disciplinary history, their parents will receive expulsion warning letters on their return to school, or the students may face expulsion at this time,” she told the Express via WhatsApp.

President of the National Parent-Teacher Association (NPTA) Kevin David said the school’s principal did not sustain injuries. Video clippings of the violent altercation have been circulating on social media. In one of the videos, seemingly taken in the school’s hallway, several female pupils are seen hitting, kicking and throwing punches at another female pupil while a crowd of their schoolmates look on.

The majority of pupils looking on screamed and laughed. The brawl takes a turn for the worse when the school’s principal tries to intervene by grabbing one of the girls to pull her away from the other. However, the other pupil has a tight grip of that girl’s hair and drags her to the ground, resulting in the principal, who is still holding on to the girl, losing her balance and also falling. Several pupils rush to the dishevelled principal’s aid, helping her to get up. The two girls continue fighting.

Gadsby-Dolly told the Express that the ministry was made aware of the fight last Friday.

“Students directly involved in this fracas would have been suspended, and will receive attention from the Student Support Services Division (SSSD),” she stated.

She said the principal’s report with full details is expected today and that will determine the exact nature of the discipline to be meted out to each student identified as being directly involved in the incident.

“The MoE (Education Ministry) will continue to offer support, counselling, and guidance to all students who require it, but the safety of our teachers, administrators and students are being compromised by a minority of students, who continue, by their actions, to disrupt some schools and bring the education system into disrepute,” Gadsby-Dolly said.

“The law allows for such students to be removed from the system to restore an atmosphere of safety and security to the learning environment, and this option has been, and will continue to be exercised. Our education system will not be held to ransom by students who, despite the best efforts of SSSD officers, continue to disrupt our schools,” she stressed.

Due to an escalation in school violence when schools fully reopened in April this year, the Ministry of Education turned to the Trinidad and Tobago Police Service for help in conducting patrols inside and outside of 17 secondary schools.