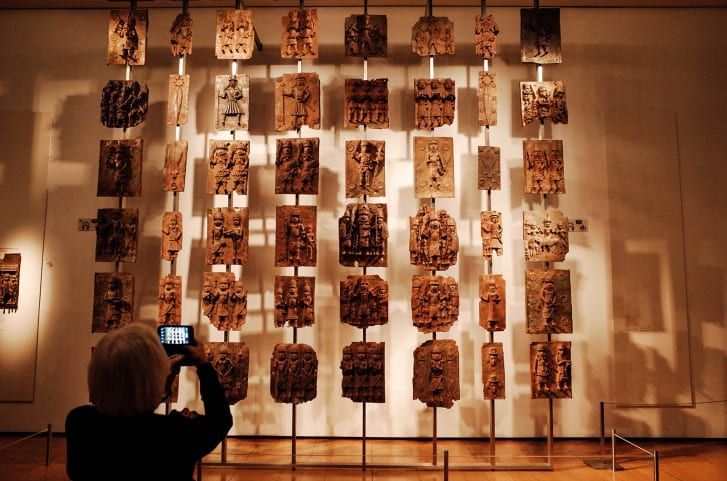 Britain is once again reckoning with its imperial history during a week in which two ceremonies were held to mark the return of ancient looted artifacts to Nigeria from the UK.

On Wednesday, a college at the University of Cambridge staged a ceremony acknowledging the official return of a bronze statue of a cockerel to Nigeria's National Commission for Museums and Monuments.

The cockerel, donated to the university in 1905 by the father of a student, is a Benin Bronze, looted during the 1897 British invasion of Benin city, in modern Nigeria, during which British forces burnt down the royal palace among other buildings and stole priceless artifacts.

The event at Jesus College was followed by a similar handover at the University of Aberdeen on Thursday evening where a sculpture depicting the head of a Benin king was returned to Nigeria. Elsewhere in mainland Europe, France and Germany have also taken measures to repatriate similar objects. President Emmanuel Macron was present during an event on Wednesday at the Quai Branly museum in Paris where 26 artifacts were ceremoniously returned to Benin.

These moves have put pressure on a number of academic and cultural institutions such as the British Museum, which is facing calls to return its enormous collection of bronzes, comprised of over 900 artifacts. The museum said in a statement sent to CNN that it "understands and recognizes the significance of the issues surrounding the return of objects" and remains committed to "share our collection as widely as possible."

The issue is an uncomfortable one for the museum, which is also home to other world-famous stolen artifacts, including the Parthenon Marbles, a series of ancients sculptures looted from Athens.

The British government believes that the museum is the right home for the bronzes as it makes them accessible to the largest number of people and, as a leading museum in one of the world's most global cities, has the best facilities for their upkeep.

This is an argument that many find insulting and steeped in exactly the type of British imperial thinking that saw the artifacts looted in the first place.

"This logic suggests that Nigeria is a poorer country that in incapable of properly looking after the artifacts that colonialists stole, despite the fact there is a state-of-the-art museum awaiting them in Nigeria. It's a classic racist argument that Britain is a place of refinement and knows best," said Kehinde Andrews, Professor of Black Studies at Birmingham City University.

Others have argued that because the Kingdom of Benin benefited from the slave trade, modern Nigeria doesn't have the moral high ground to reclaim the artifacts are returned.

Enotie Ogbebor, a Nigerian artist and authority on the bronzes, said that as "many of the artifacts were made long before the slave trade" this is an irrelevant point. "They are part of our culture, they tell a story of our history and they were stolen. It's quite simple."

No matter how much the British government would prefer these artifacts remain in the UK, critics say it's already on the wrong side of history.

A parallel debate over Britain's statues of historical colonialists and slave traders -- sparked by the Black Lives Matter protests that swept the globe following George Floyd's murder -- has forced many in the UK to finally have that difficult conversation about their country's history and the horrors of the British Empire.

Last summer, when protesters pulled down a statue of the 17th-century slave trader Edward Colston and vandalized other statues, including one of Winston Churchill, Boris Johnson fired back, calling the attack on the Churchill statue "absurd and shameful," and his government did everything it could to protect the monuments in the name of heritage -- following up in March with a bill that contained measures that would make defacing statues a criminal act.

On the specific topic of the Benin Bronzes, a government spokesperson told CNN this week that museums operate "independently of the government with decisions relating to collections care and management, including whether to make loans of any objects, taken by the trustees of each institution," pointing out that the bronzes are a private collection rather than a part of the national collection.

This level of buck-passing combined with government policy that firmly backs protecting statues of colonialists in the name of heritage is frustrating for those who believe artifacts like the bronzes should be returned on the basis they were stolen goods.

"There is a new generation who will remember the theater of George Floyd protests and statues being pulled down," said S.I. Martin, author of multiple books on Britain's colonial history and Black British history.
"It seems inconceivable that the conversation will stop at this point or that people will suddenly go back to being 100% comfortable with how these items came to be in Britain. That might force museums to act for the sake of their own relevance," he added.

For now, the British Museum is prohibited from giving its artifacts back by British law, although it is reportedly discussing possible loans to the planned Edo Museum of West African Art in Nigeria.

The decision on whether it does might hand a small symbolic victory to one side in the culture war over Britain's colonial past. The question is, to which side will this institution, which holds so much cultural clout, give its seal of approval as the UK attempts to address its complicated, controversial history in an era of such division and anger. 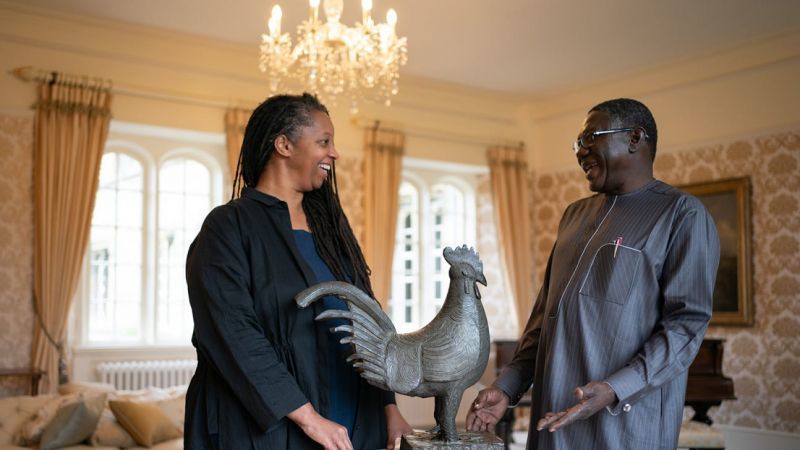 The cockerel, donated to the university in 1905 by the father of a student, is a Benin Bronze, looted during the 1897 British invasion of Benin city, in modern Nigeria, during which British forces burnt down the royal palace among other buildings and stole priceless artifacts. 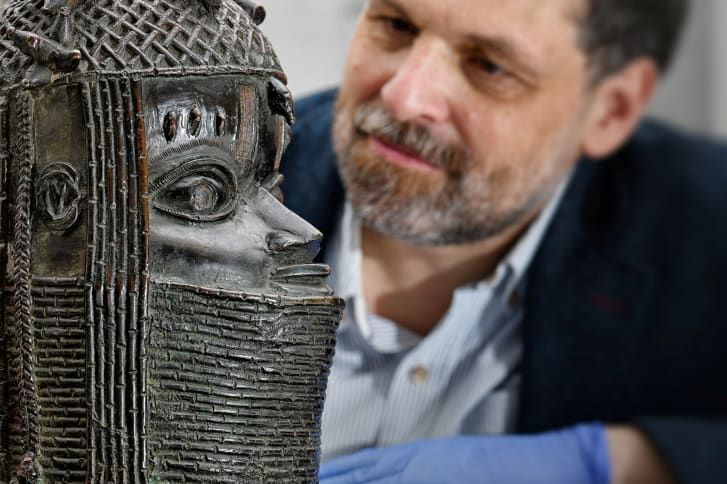 Neil Curtis, head of Museums and Special Collections at the University of Aberdeen, looks at a bronze sculpture depicting an oba (king) of Benin. 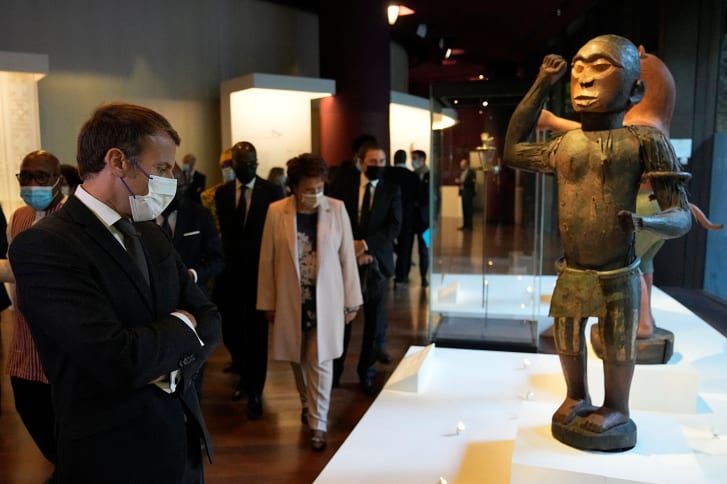 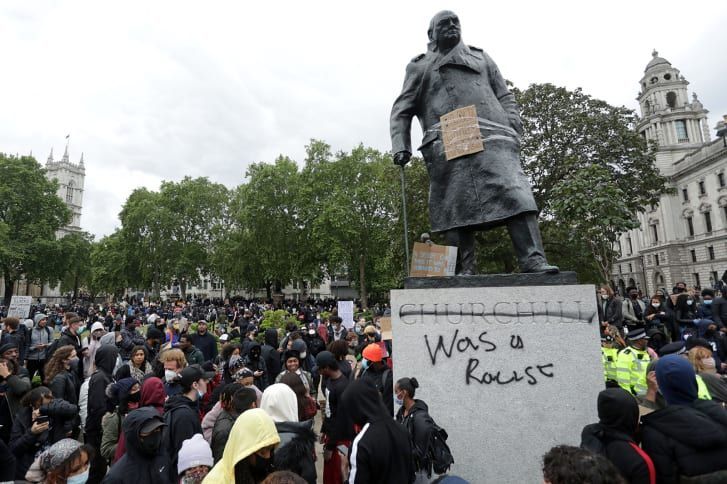 The statue of former British prime minister Winston Churchill is seen defaced, with the words (Churchill)