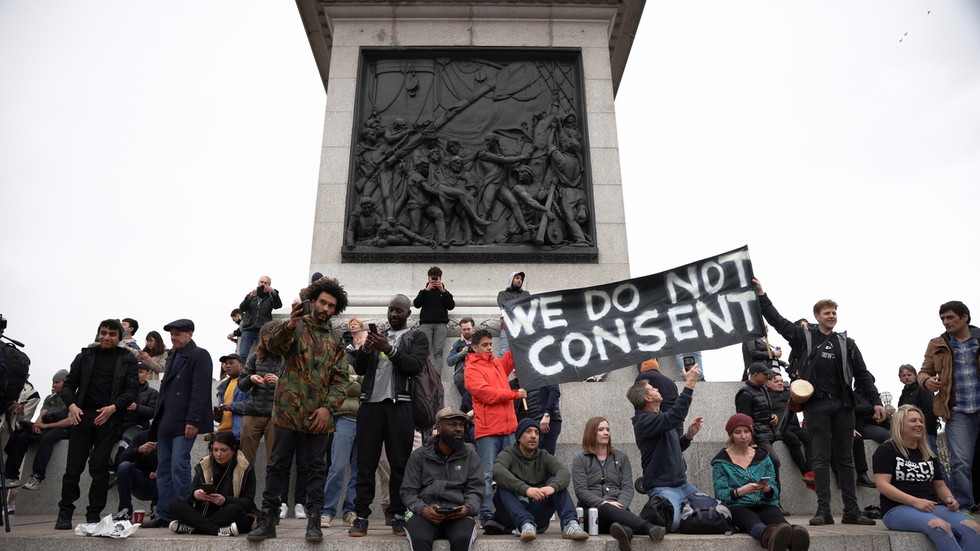 The UK likes to lecture other countries on how to behave, but it doesn’t fare well in the Amnesty International annual report on human rights, with its growing disregard for individual freedoms causing serious concern.
There is a sense of relief upon reaching Page 378 of the Amnesty International Annual Report for 2020/21, as you read the organisation's findings about the United Kingdom’s record on human rights. That relief soon vanishes.

Before that point, you would have encountered the evil the usual global basket cases have demonstrated over the past year. Those classic human rights infringements are there by the bucketload: the extrajudicial killings, arbitrary arrests, detention and torture, egregious displays of discrimination against women, children, ethnic minorities, and lesbian, gay and transexual populations, denial of food, water, sanitation, education, and freedom of expression.

In some countries, citizens just vanish off the face of the Earth and are never seen again. Like magic, but tragic. Not just in those ‘we-do-what-we-want’ parts of the world like China, Pakistan, Iran, Iraq, Turkmenistan, and Nigeria. People are disappearing in places where many carefree Western tourists choose to take their holidays, like Argentina, Mexico, Egypt, Kenya, Brazil, and Thailand. Pad Thai, anyone?

Away from the eyes of sunburnt Brits enjoying the golden sands, infinity pools, cocktails and exotic dishes, domestic security forces hunt their prey with impunity, unbound by the constraints of human rights or interfering Amnesty International investigators.

And while to ‘tut-tut’ and shake our heads in disapproval is almost an instinctive reflex to the tales of horror, violence and inhumanity found in the 408-page report, before stroking your chin and bemoaning how uncivilised civilization is elsewhere, know one thing: Britain does not come out smelling of roses.

The more you read of the annual report, the more you begin to feel that, while state-sponsored torture, the mistreatment of entire populations, and cruelty to fellow human beings are clear breaches of universal human rights, there are more subtle and insidious contraventions that are just as effective.

In these instances, ruling authorities are encroaching upon freedoms not with guns and black hoods over the head, but with undemocratic decisions, unchallenged legislation, delays to inquiries, and a slow tightening of laws related to social freedoms – all with the compliance of the people they govern.

Like the UK, for example, where Amnesty International considers the incompetence that reigned in dealing with the outbreak of the Covid-19 pandemic – which has seen the country experience one of the highest death rates in Europe – tantamount to a breach of the right to health for elderly residents in care homes, along with black and Asian health workers. Many died, in disproportionate numbers to the rest of the population.

Not only that, but the inquiry which more than 70 organisations demanded from the government into the handling of the pandemic has been fobbed off, until some as-yet-to-be-determined date in the future.

It’s hard to understand why there is not a massive outcry over this. Have we Brits truly become that docile?

The report also expresses concerns over how the UK addresses discrimination, about freedom of assembly and how police deal with demonstrations, about the right to housing and the way we treat women, refugees, asylum-seekers and migrants, and the rights of lesbian, gay, bisexual and transgender people. Pretty much everyone.

There are worries about allowing counter-terrorism forces and British soldiers serving abroad impunity for their actions. The same sort of impunity enjoyed by those police and in-the-shadows types whose job it is to ‘disappear’ troublemakers in far-off places, in which we’re glad we don’t live for that very reason.

And yet, where’s the media outcry?

Elsewhere, we are signing arms deals worth billions with authoritarian regimes like Saudi Arabia and selling rubber bullets to American police which they can fire at Black Lives Matter protesters. But that’s just business.

Something seems skewed on our moral compass, which is strange because our leaders often find themselves lecturing to the world about a better way, about compromise and fairness, when in fact, they are endorsing aberrant behaviour.

As Amnesty International’s UK director Kate Allen warned five years ago, “There’s no doubt that the downgrading of human rights by this government is a gift to dictators the world over and fatally undermines our ability to call on other countries to uphold rights and laws.”

She was right, and things have not improved in the five years since then. So when we huff and puff about extrajudicial killings in the Democratic Republic of Congo, or upbraid Kyrgyzstan when police choose to disperse a peaceful march on International Women’s Day, or even insist that Serbia comes clean about who ordered the removal of the bodies of 900 Kosovo-Albanians from Kosovo to Serbia in a 1999 cover-up of slaughter, we should not be surprised when they ignore us.

The problem is that when you play free and easy with human rights, the moral high ground is no longer yours, and that news travels fast. The Amnesty International annual report will make sure of that.
#COVID-19  #Covid