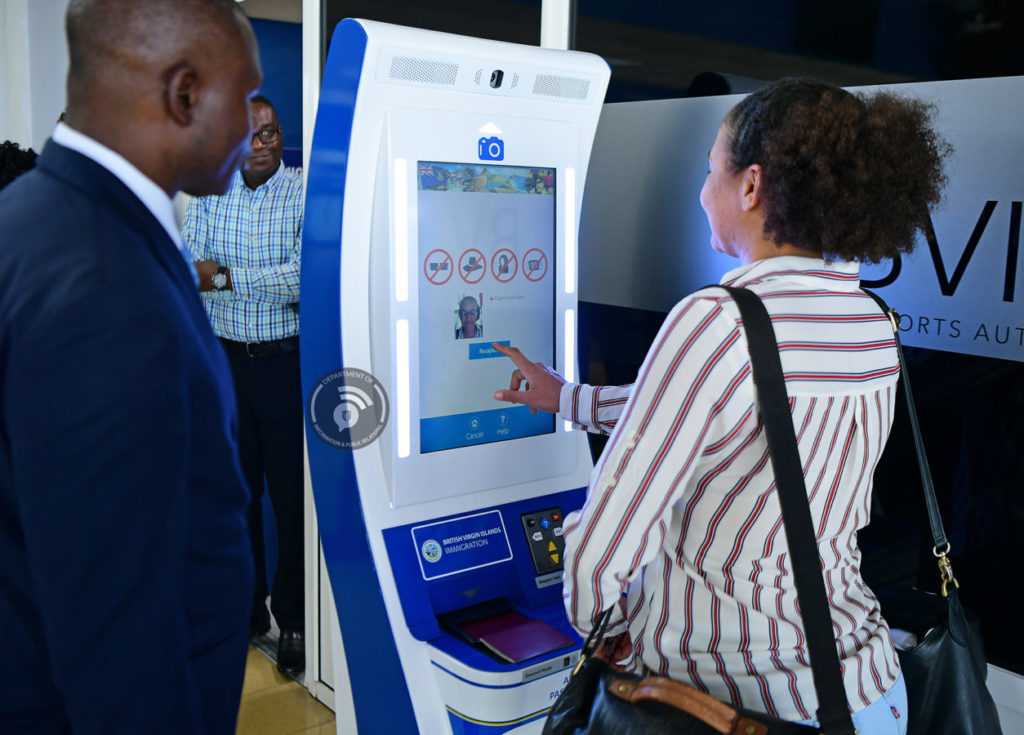 The Immigration Department has installed Automated Passport Control (APC) kiosks at the Terrance B Lettsome International Airport on Beef Island to expedite entry for returning locals holding a British Virgin Islands or United Kingdom passport.
A press release by the Premier’s Office noted that the APC kiosks, launched during a brief ceremony at the airport last Friday, will enable eligible travellers to scan their passports and respond to entry questions.

The system performs a facial recognition verification of the travellers which allows them entry into the territory if successful.

Deputy Premier Kye Rymer, who was Acting Premier at the time of the launch, said: “We are working with e-Government to make these processes efficient, streamlined, and online. We want to ensure [entering the Virgin Islands] is a seamless process.”

Rymer also acknowledged the hard work of the Immigration Department, which he said “worked tirelessly” during the height of COVID-19.

“We look forward to the launch of the additional phases of the [border management system],” he added.

Permanent Secretary in the Premier’s Office, Carolyn Stoutt Igwe, said the kiosks are a significant milestone, “as the government seeks to enhance services to ensure the best possible experience for residents and visitors, as well as to improve the territory’s border security”.

She also said the launch of the kiosks is timely in preparing for the next tourist season.

“We are a tourism destination, and we are working hard to ensure that we improve our services, as we look forward to the next tourist season,” Stoutt-Igwe said.

The Permanent Secretary said the system’s next phase entails the launch of the small vessel and aircraft portal which will allow pre-clearance for private/charter vessels, day-trippers, and private/charter aircraft. Additionally, the Entry and Debarkation (ED) cards online processing is underway.

“I hope everyone is as excited as I am and will pray for the Immigration Department as they continue to transform our experience at our borders,” Stoutt Igwe said.

The Permanent Secretary concluded her remarks by expressing gratitude to the Canadian Bank Note (CBN) Company officials for their “steadfast assistance” with the project, in addition to the Immigration Department’s team for their hard work in advancing the initiatives.

Commenting on the new kiosks, Deputy Chief Immigration Officer, Nadia Demming-Hodge said: “This proven technology is widely used throughout the Caribbean region and internationally and is designed to reduce the wait time upon arrival while securely vetting the traveller”.

Demming-Hodge said that eligibility for the use of the kiosk will extend to other nationalities within a future phase of the project.

Director of Business Development of CBN, Fuencisla Leal-Santiago, thanked the Immigration Department and stakeholders present and said she looks forward to continuing the successful working relationship with the Government of the Virgin Islands.
#the Virgin Islands  #COVID-19  #Covid