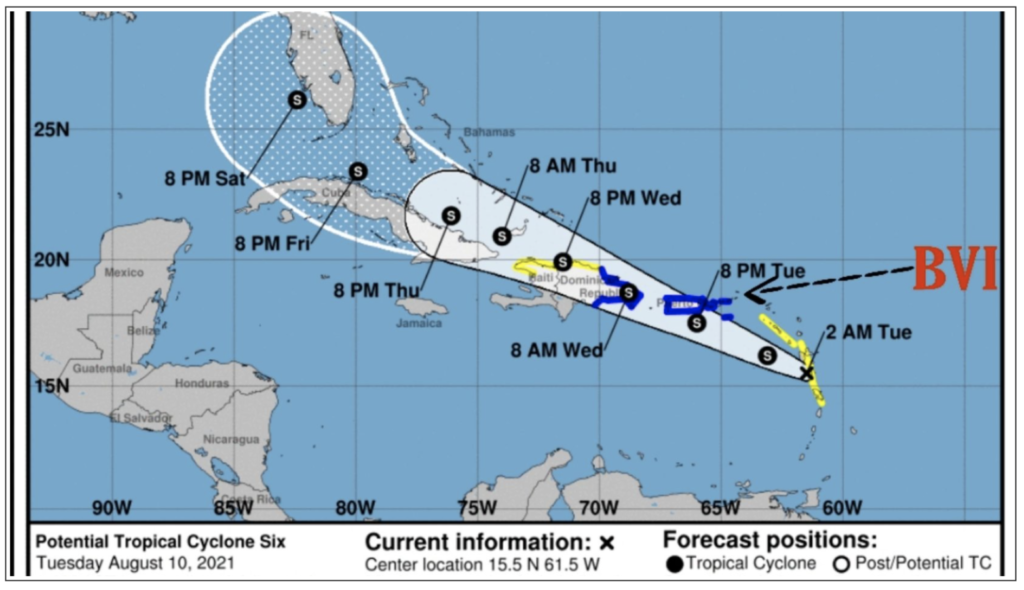 While neighbouring jurisdictions such as Puerto Rico and sections of the US Virgin Islands have been placed under a Tropical Storm Warning, the BVI is, so far, in a relative safe zone and has not been given any such warning.
The warning is for the weather system — Tropical Cyclone 6 — which, as of Tuesday morning, August 10, was located approximately 214 miles east south-east off Road Town.

In a weather bulletin this morning, the Department Disaster Management (DDM) said showers, thunderstorms and gusty winds are anticipated over and around the islands in the next 24 hours as Tropical Cyclone 6 moves across the area. These effects will be from the outer bands of the system.

The DDM said the system could produce one to two inches of rainfall.

A Tropical Storm Warning is in effect for Puerto Rico, including Culebra and Vieques (US Virgin Islands) and sections of the Dominican Republic.

“Although no watches or warnings have been issued at this time, the experts at the Antigua and Barbuda Met Office have issued a Tropical Alert. This means that we should all be on alert in case a watch or warning becomes necessary later today or this evening. The alert also states that, as a reasonable worst-case scenario, we here in the BVI may see impacts such as rain, high seas, coastal flooding, and near-tropical storm-force winds,” Governor John Rankin said in a message to residents.
#John Rankin