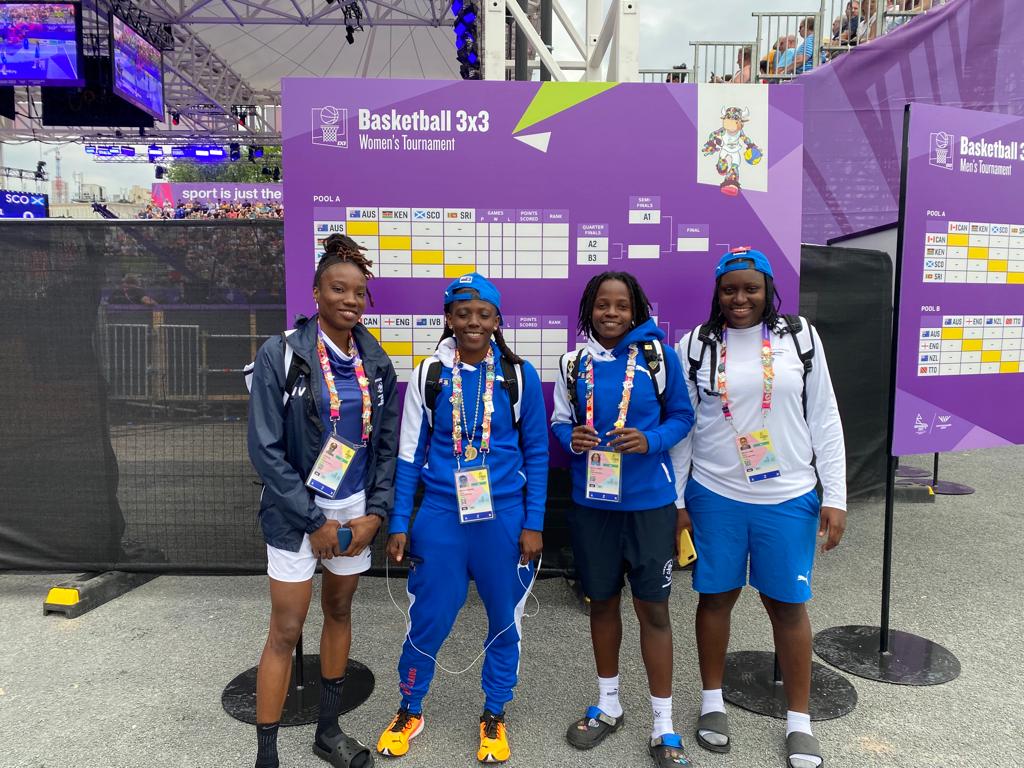 While the BVI Women’s Commonwealth Games 3×3 Basketball team was expected to receive a thrashing by their overseas counterparts who are far more experienced, the team showed grit and fight and showed exactly how well they can play on the major stage.
Caught out by a slow, nervous start in the first game and a 6-22 defeat at the hands of Canada, the team of Shauliqua Fahie, Makayla Pickering, Joy Victor, and Keithreece Smith bounced back and gave as good as they got against the semi-professional, college graduate, and league players.

A press release by the BVI Commonwealth Games Committee indicated that Fahie put the first international points into the BVI record books from the free throw line against Canada with almost three minutes gone, Pickering made a two-pointer to make the score line 3-5, but despite further points from Smith and Victor, the Canadians had steadily pulled far enough ahead to be in cruise control at the end.

“We did ok for our first game but needed to work on our spacings,” Pickering said.

Smith thought that the standard had not been as high as she expected and Fahie was appreciative of the crowd support but knew that her teammates had more to offer.

“We need to focus on what we have to do and get more points on the board,” she said.

Canada had a good game plan and certainly made the BVI team think about how to compete.

“They caught us a bit by surprise,” said Victor. “It was rougher than I thought, a much harder level of contact.”

As the BVI women then went head-to-head against England, they confronted the hosts with tenacious and intense defence to leave their opponents scratching their heads for a new game plan and only half-point ahead with almost half the game time of ten minutes done.

Time and time again, Fahie, Victor, Pickering and Smith withstood England, learning the aggressive nature of the international sport, turning defence into quick offense on transition plays and, with a little more shooting composure, could have sent England on their way out of the arena with heads bowed in front of the largely partisan crowd.

However, England’s Hannah Jump found a crucial hot streak when it mattered most and steered her anxious team to the 21-point threshold and a nervy win.

How relieved England was to come away with the victory was clear for all to see as teammates rushed to swamp Jump and lift her above their shoulders as she fired home a third successive two-pointer.

The BVI — who got three points from Victor and one feature in the tournament highlight reel — also got a point each from Smith and Fahie and left the court with heads held high and to raucous appreciative support.

“We knew we had to improve, and we did much better than the first game,” said Smith.

“I felt like I was physically fighting out there!” said Victor. “England came at us at a different level and realised I had to hold my ground and start fighting back. It was a hard day!”

“We played much better and gave them as good as we got, we made them fight for their win and I’m proud of us,” said Fahie.

“We were much better at rebounding, and we definitely improved on the last game,” said Pickering.

Coach Eric Mattias believed his girls did well but did concede they probably weren’t ready for the level of aggressive play. However, the team will learn and can only improve.

The third and final game saw New Zealand face the BVI and hold their opponents for the full ten minutes of game time, before losing 5-19. (A game is either ten minutes or the first to 21).

“We did good as a team and played better than the first two games,” said Smith. Fahie echoed those sentiments saying: “Our defence keeps improving and we are giving teams a run for their money.”