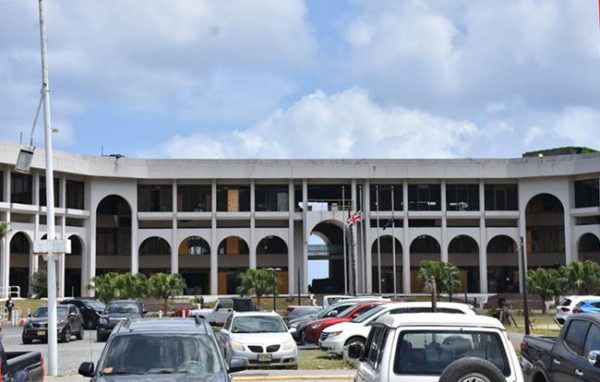 Government has awarded a local design company a $2,092,037.52 contract for the installation of exterior fixtures to the Ralph T O’Neal Administration Complex.

As the winning bidder for the project, Design BVI Limited will be responsible to procure and install impact-resistant windows, doors and frames on the building.

Speaking at the contract signing ceremony on Tuesday, Works Minister Kye Rymer said the contract is a revision of the initial-intended amount which had been agreed on earlier this year. He said it saved government more than $200,000.

Ryme said that the works will represent a substantial improvement on the appearance of the complex as many of its glass doors and windows were either blown in or severely damaged during the 2017 hurricanes.

He added that following the disaster, a number of temporary plywood barriers were constructed within the complex which will now have to be removed.

“There is great need to remove and replace all temporary plywood barriers and damaged glass to restore and upgrade all windows and doors,” he stated.

Works to begin in December

Despite the contract being awarded this month, Rymer said a number of factors have resulted in a confirmed December date being set for the commencement of works.

“We are cognizant that we are in the peak of the hurricane season and do not want to increase our liability by undertaking major works of this type during this season. Also, there is a design review and procurement process for these customised windows, glass windows and doors that is likely to take a few months,” the minister explained.