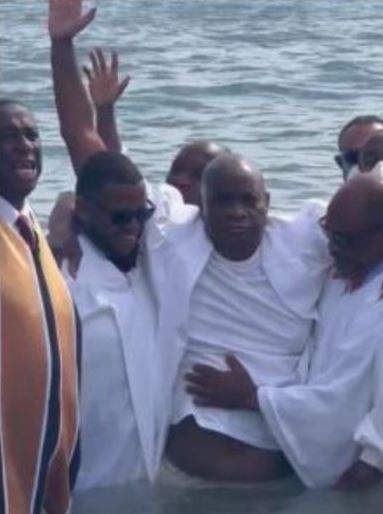 The Mighty Sparrow, the undisputed Calypso King of the World, was baptised on Saturday at Far Rockaway Beach in Queens, New York.
According to the Searchlight newspaper in St Vincent and the Grenadines, Sparrow, 87, whose real name is Slinger Francisco, was “taken into the water of Holy Baptism by Vincentian Seventh Day Adventist Pastor Claudius Morgan.”

The paper said that Sparrow, who now resides in Queens, was “dressed in all white” for his water baptism.

“He is now known as Brother Francisco [and is] a member of the Linden Seventh Day Adventist Church in New York,” the Searchlight said.

While celebrating his 87th birthday in July, the legendary Mighty Sparrow told the Trinidad Express newspaper that he felt “wonderful”.

The publication said that Sparrow, who was born on July 9, 1935, was expected to spend his special day listening to a radio i95.5 FM tribute, dubbed “Sparrow Day”.

Sparrow, who grew up in Port-of-Spain, the Trinidad capital, was born in the fishing village of Grand Roy, Grenada.

He moved to Trinidad and Tobago as a one-year-old with his mother.

His father had relocated there in 1937.

Sparrow, who is also a songwriter and guitarist, is regarded as one of the most renowned and most successful calypsonians.

With his baptism Saturday as a Seventh Day Adventist, it's uncertain if the legendary Mighty Sparrow will ever again sing calypsos to his legions of fans worldwide.