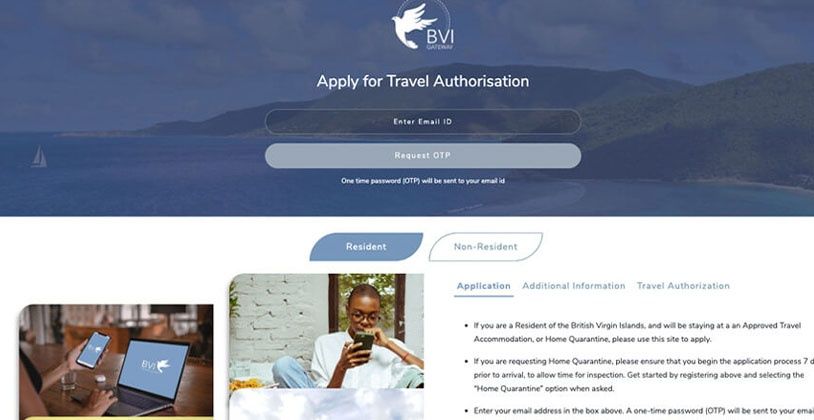 Following countless complaints from the travelling public, Premier and Minister for Finance Hon. Andrew Fahie has announced the government’s plans to create a friendlier version of the existing BVI Entry Portal.

This was announced on Friday, September 4, during a press conference.

He said on August 23, the government met with various stakeholders, including the developers and health authorities, to chart a way forward.

“The way forward involves making some changes to the gateway portal, which we hope will improve the ease of use of the system for residents and visitors,” he said.

Premier Fahie continued: “We agree to immediately remove the Customs and Immigration Forms from the BVI Gateway Entry Portal; this would reduce the amount of time persons spent completing their applications. We are progressing to automate the process for fully vaccinated persons to get their approvals.”

However, over the past few months, the volume of applications from persons wanting to travel into the Virgin Islands has increased significantly, and this would have contributed to longer processing times on occasions.

“The system will automatically generate the travel authorization certificate instead of it being done manually as was the case in the past,” adding that random review of approved applications will be made to further verify documentation if any discrepancies are found, the approval will be immediately revoked.

Importantly, travellers, whether vaccinated or not, must know that they are required to present proof of vaccination, negative results for a valid and approved negative COVID-19 test results and their gateway travel portal application upon arrival. Failure to provide authentic documentation will result in penalties of up to $10,000.

He noted that unvaccinated and partially vaccinated travellers will still be processed manually within an eight-hour window.

"But these represent only five to 10 per cent of the overall traffic through the gateway; therefore, once the unvaccinated or the partially vaccinated passenger has submitted all the required documents to complete their application they should be able to get a faster turnaround on their application within 8 hours," the Premier said.

He said to further improve the friendliness of the BVI Gateway Portal, pop-up boxes will be integrated on the site for passengers to verify that they have the requisite documents.

In the meantime, Premier Fahie spoke to some of the contributors to the delay on the portal for some users.

He said: “One major contributor to the delays in the system is where some travellers would upload incorrect or incomplete information and documents. There have been a high volume of instances where persons submitted travel insurance that did not show coverage for COVID-19. A high number of persons submitted results for COVID-19 tests that are not approved, such as saliva and antibody tests.”

The Premier said they have had problems with persons submitting the incorrect vaccination cards or claiming to be fully vaccinated when they were not.

"These were just some of the issues that slowed down the system; delays would be caused when members of the BVI Gateway Team would have to spend additional time assisting these persons to correct their documentation," he stressed.