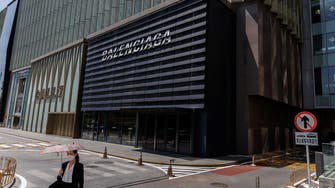 Shares in global luxury goods groups, which rely heavily on Chinese shoppers, rose on Tuesday after Beijing further relaxed some COVID restrictions that had been in place for the past three years, fueling hopes of a full-blown reopening soon.
China will stop requiring inbound travelers to go into quarantine starting from Jan. 8, the National Health Commission said on Monday in a major step towards easing curbs on its borders, which have been largely shut since 2020.

China, which is gradually moving away from a strict zero-COVID-19 policy that battered its economy, kept consumers indoors and sparked a wave of public discontent, accounts for 21 percent of the world’s 350-billion euro luxury goods market, behind North America and Europe.

Before the current slowdown, it had for years been the fastest growing region, with young, urban, middle class professionals powering the luxury market by splashing out on Hermes’ 10,000 euro-plus ($10,633) Birkin handbags and Gucci’s 1,000 euro fur-lined loafers.

It is expected to become the top market for the industry by 2025 and already generates about 35 percent of annual sales at Gucci, French group Kering’s star brand, 27 percent for rival LVMH’s fashion and leather goods division and 26 percent for Hermes.

With Europe facing an energy crisis and the US economy also cooling due to higher interest rates, China is looking to a recovery next year and the luxury world is hoping to take advantage of that.

However, some analysts said investors should not get carried away.

“Recovery may still be slow, particularly given the caution among consumers, and is likely to build in popular holiday shopping destinations regionally first,” she said. “Brands will be gearing up for the return of wealthy, globetrotting Chinese tourists.”

According to a recent report by the McKinsey consultancy, while non-luxury fashion sales are expected to rise between 2 percent and 7 percent in 2023, luxury sales should climb 9 percent to 14 percent over the same period.

“China will likely remain a core market for fashion consumption in the long term, with significant untapped opportunities among a customer base whose sentiment for luxury brands in particular is holding strong,” it said.
#COVID-19  #Covid