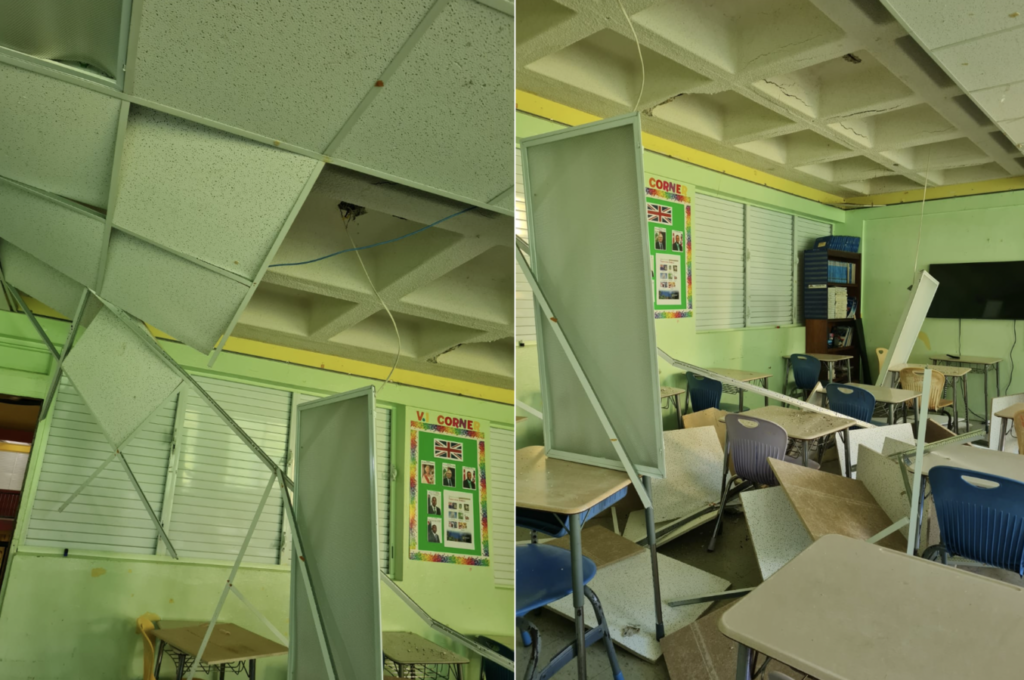 A classroom ceiling has caved in at the Althea Scatliffe Primary School.

No one was hurt during the in the incident that happened over the weekend.

According to the Education Minister Dr Natalio Wheatley, the information he received indicated the ceiling tiles and the infrastructure that holds up the tiles have been compromised.

“Something like this is not new. Althea Scatliffe is one of the oldest buildings in the territory and it is certainly crumbling. Some major works have to be done there. We have engineers on the site right now and it’s best to have a direct discussion with the engineers,” Wheatley said.

Wheatley said he was going to the school to obtain all the facts about the situation and to properly assess the damage done to the classroom.

“The reality of the situation is that these challenges have been going on for a number of years. The hurricane exacerbated the challenges and we need the resources to get them fixed,” the education minister said.

Wheatley noted situations like this will keep coming up because of the territory’s crumbling infrastructure. He said the school infrastructure in the Virgin Islands is very old and poor maintenance over the years has led to its rapid degradation.

“I came and met it this way and it’s a big challenge to solve and for me to solve it I’m going to need the resources. I’m asking my colleagues and cabinet and everyone to support me in getting the resources required to get the work done. Because we do not want to see any of our children hurt,” the minister added

He further said the crumbling of the roof at the primary school is a real low point for him because he keeps thinking about what would have happened if a child was in the room at the time.

The incident happened at a time when the school infrastructure in the territory has been under the microscope.

Last week, teachers across the territory staged a sickout to protest their treatment and poor working conditions. One of the primary demands of the teachers were better maintenance of the territory’s schools.

Wheatley had urged his fellow members of the House of Assembly to approve $2 million for an overhaul of the education sector.