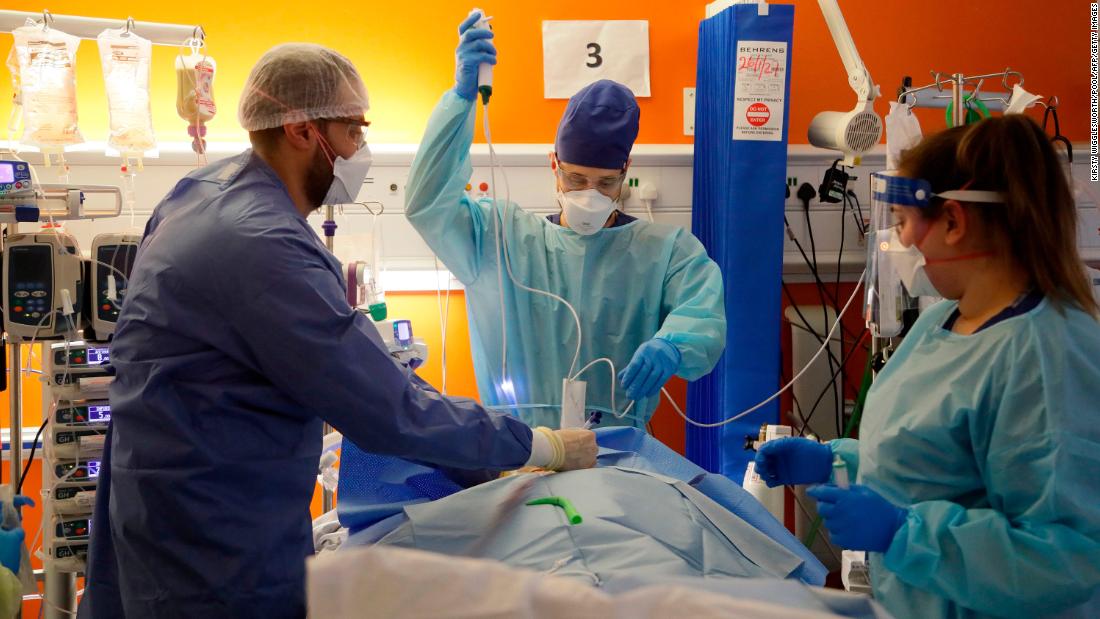 The coronavirus variant B.1.1.7, which was first identified in the United Kingdom, is associated with an estimated 64% higher risk of dying from Covid-19, suggests new research published in a peer-reviewed journal.

A sample of people in the UK infected with the variant appeared to be between 32% and 104% -- so around a probable 64% -- more likely to die than those infected with the previously circulating variants, according to the study published in the medical journal the BMJ on Wednesday.

The variant was originally found to be more easily transmissible and the new data support claims from UK officials, based on preliminary data, that the variant may be more deadly, as well.

The researchers, from various institutions in the UK, analyzed data on more than 100,000 patients who tested positive for Covid-19 between October through January, and were followed up with until mid-February.

The researchers took a close look at whose tests detected the variant compared with those from previously circulating variants.

The study showed that the new variant was associated with 227 deaths in a sample of 54,906 patients -- compared with 141 deaths among the same number of patients infected with previous strains.

"In the community, death from COVID-19 is still a rare event, but the B.1.1.7 variant raises the risk. Coupled with its ability to spread rapidly this makes B.1.1.7 a threat that should be taken seriously," Robert Challen, lead author of the study from the University of Exeter in the UK, said in a news release on Wednesday.

More research is needed to determine what exactly happens in the course of infection caused by the B.1.1.7 variant that may lead to an increased risk of death, Dr. Amesh Adalja, a senior scholar at the Johns Hopkins University Center for Health Security, told CNN on Wednesday. In the study, the greater risk of death associated with the variant emerges around two weeks in the course of a patient's Covid-19 illness.

"There is a clear separation that occurs two weeks into that -- so I would want more understanding of what the authors think that might be caused from," said Adalja, who was not involved in the new study.

"Could it be that they're getting bacterial infections, because they're in the hospital longer? Could it be they're more likely to have blood clots? What complication is causing that delay in death?" Adalja said. "That's what I thought was most interesting."

The new study adds to our understanding of the B.1.1.7 variant, which is fueling a recent surge in infections across Europe, Lawrence Young, a virologist and professor of molecular oncology at the University of Warwick in the UK, who was not involved in the new study, said in a statement distributed by the Science Media Centre on Wednesday.

"This study confirms previous work showing that infection with the B.1.1.7 virus variant is associated with an increased risk of death," Young said in part. "The precise mechanisms responsible for increased mortality associated with the variant remain uncertain but could be related to higher levels of virus replication as well as increased transmissibility."

Dr. Julian Tang, honorary associate professor and clinical virologist at the University of Leicester, said in a statement that he is "still not yet very convinced by these results" from the study.

The coldest winter temperatures can exacerbate the underlying conditions -- such as like chronic heart, lung, kidney and neurological diseases -- that might predispose people to more severe Covid-19 or even death, Tang said in the statement distributed by the Science Media Centre.

"We really need to revisit this in Spring to account for the cold weather factor," as well as other seasonal variables, he said in part.

More research also is needed to determine whether similar findings would emerge among more patients from other parts of the world.

The variant is spreading in the United States, for instance, and health officials warn it "might become dominant" in the country.

"The variant of concern, in addition to being more transmissible, seems to be more lethal," the researchers wrote in their study. "We expect this to be associated with changes in its phenotypic properties because of multiple genetic mutations, and we see no reason why this finding would be specific to the UK."

As the B.1.1.7 variant continues to spread in the United States, Adalja said that the nation should take a close look at the possibility of the increased risk of death.

"If we take this as true -- that this variant is more deadly, in addition to being more contagious -- it underscores the need to get vaccine faster into people's arms, because we know that our vaccines are stable and robust against this variant," Adalja said. "The better we are getting vaccine into people, the less of a problem this variant will be."