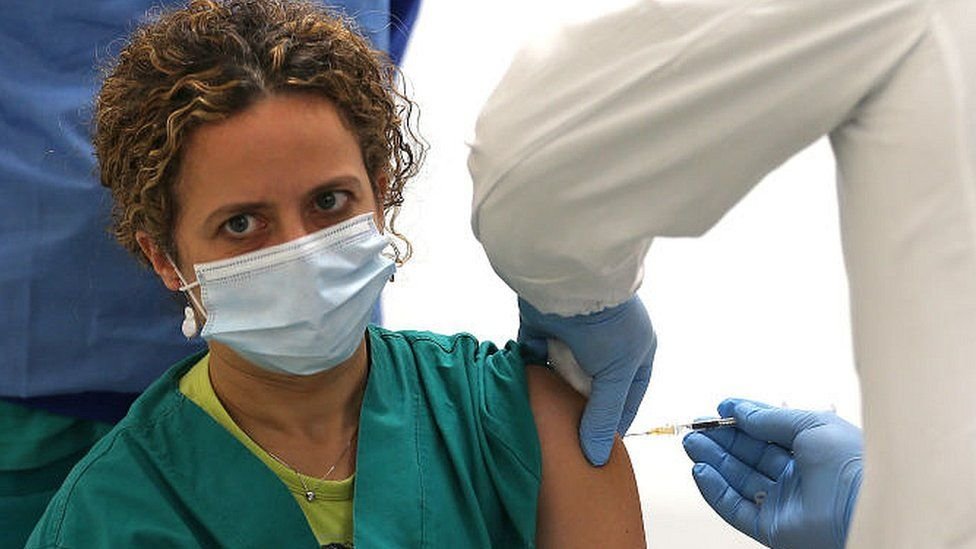 The World Health Organization (WHO) has criticised the EU's announcement of export controls on vaccines produced within the bloc, saying such measures risked prolonging the pandemic. 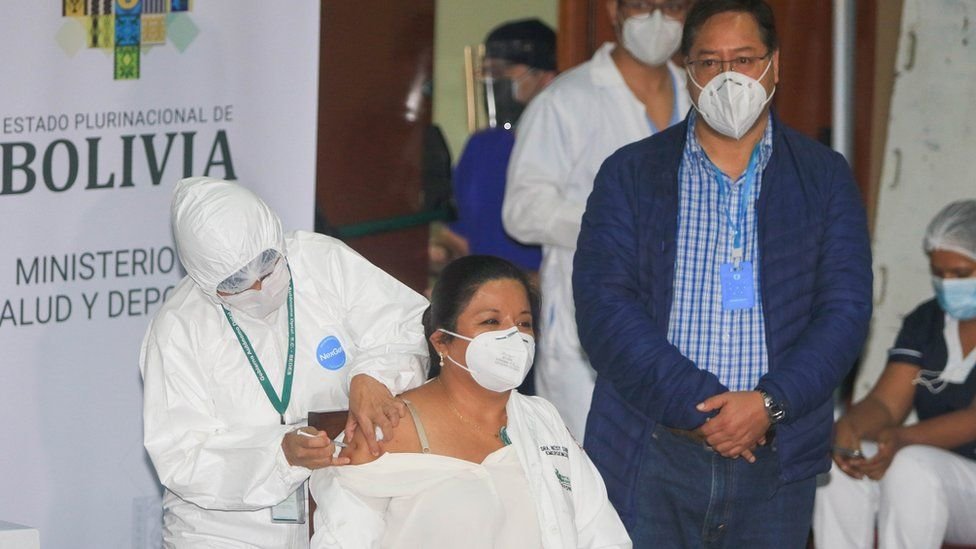 Relatively few vaccines have so far been administered in poorer countries

The EU introduced the measure amid a row with vaccine manufacturers over delivery shortfalls.

But WHO vice-head Mariangela Simao said it was a "very worrying trend".

Speaking at the Davos Agenda - a virtual version of the global summit - he said vaccine hoarding would "keep the pandemic burning and... slow global economic recovery", in addition to being a "catastrophic moral failure" that could further widen global inequality.

What is the EU doing?

The European Union is introducing export controls on coronavirus vaccines made in the bloc, amid a row about delivery shortfalls.

The so-called transparency mechanism gives EU countries powers to deny authorisation for vaccine exports if the company making them has not honoured existing contracts with the EU.

"The protection and safety of our citizens is a priority and the challenges we now face left us with no choice but to act," the European Commission said.

The controls will affect some 100 countries worldwide - including the UK, the US, Canada and Australia - but many others, including poorer nations, are exempt.

However, the EU has been forced to backtrack on plans to impose restrictions on the export of vaccines across the border on the island of Ireland after outcry from Dublin and London.

The EU insists its controls are a temporary scheme, not an export ban.

Why is this happening now?

The news comes with the EU in a very public dispute with drug-maker AstraZeneca over supplies, and under growing pressure over the slow pace of vaccine distribution.

Earlier on Friday the Commission made public a confidential contract with AstraZeneca, the UK-Swedish company behind the Oxford vaccine, to bolster its argument that the firm has been failing to fulfil its promises to deliver to the bloc.

The contract stipulates that the pharmaceutical company would commit its "best reasonable efforts" to manufacture and distribute doses.

AstraZeneca has blamed the delays on production glitches at plants in the Netherlands and Belgium, as well as the late signing of contracts.

Under the EU's new rule, vaccine firms will have to seek permission before supplying doses beyond the EU. Its 27 member states will be able to vet those export applications.

Vaccines produced by Pfizer in Belgium are currently being exported to the UK, and the EU insists that some of the AstraZeneca vaccine produced in England is destined under contract for EU citizens.

The EU is also in a supply dispute with Pfizer, which is set to fall short of the contracted vaccine volume for the EU by the end of March. Pfizer says the reason for that is the urgent expansion of its facility in Puurs, Belgium.

Who is exempt from the export controls?

The EU is allowing some 92 exemptions from the export control regime, including: vaccine donations to Covax, the global scheme to help poorer countries; and exports to Switzerland, countries in the western Balkans, Norway and North Africa. Other Mediterranean countries such as Lebanon and Israel are also exempt. 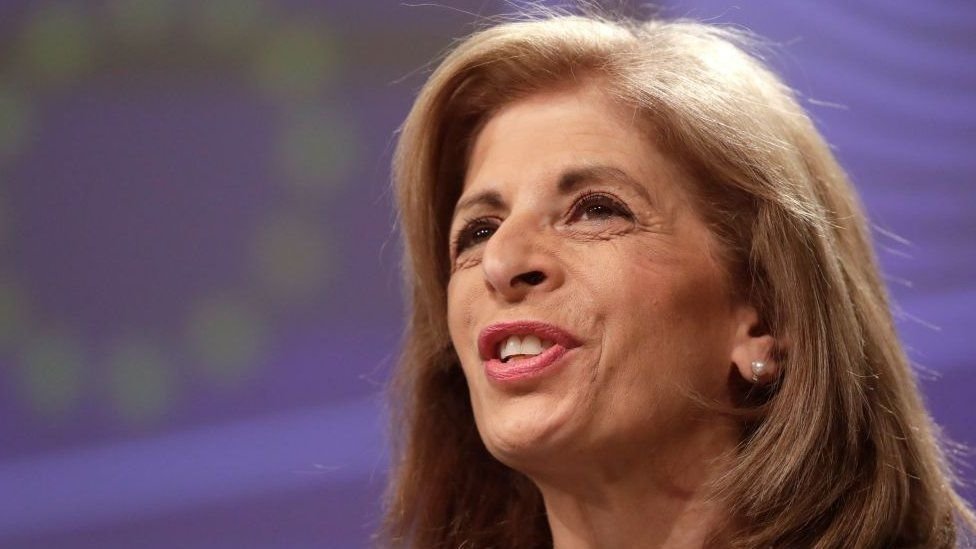 But on Saturday WHO spokeswoman Margaret Harris told the BBC vaccines should be given to all vulnerable groups and health workers across the globe before each country starts giving the jabs out more widely.

This would mean wealthy nations, such as the UK, halting immunisations at home once priority groups had been vaccinated and instead helping with vaccinations elsewhere.

So far 95% of all vaccinations had taken place in just 10 countries, Ms Harris said, while only two low and middle income countries had even begun immunisation programmes.

The EU is contracted to receive the following vaccine doses:

The BBC's Europe editor Katya Adler says some EU governments are beginning to show impatience with Brussels, which had hoped its vaccination purchasing scheme would be a beacon of European solidarity and strength.

The Commission's laboured negotiating process, the tardy approval of vaccines by the EU's medical regulator and delays now in vaccine deliveries have left EU citizens demanding answers and action, our correspondent says.

Markus Söder, the Bavarian premier and Germany's possible future chancellor, told ZDF television on Friday that it was his impression that the commission "ordered too late, and only bet on a few companies, they agreed on a price in a typically bureaucratic EU procedure and completely underestimated the fundamental importance of the situation."

On Friday, French President Emmanuel Macron questioned the efficacy of the AstraZeneca vaccine, describing it as "quasi-ineffective" for the over-65s.

The claim was rejected by Sir John Bell, an Oxford University professor who was part of the team behind the vaccine.

"I suspect this is a bit of demand management from Mr Macron," Sir John told BBC Radio Four's Today programme. Asked if he thought Mr Macron was trying to reduce demand for the jab, he added: "Well, if he didn't have any vaccine the best thing you could do is reduce demand."

The politics of vaccines in the EU

Earlier this week the EU indicated this proposal was coming down the track. It would be a "notification system" officials said. Nothing more than a way of showing transparency.

That has now turned into an export control policy, partly because of Germany's insistence that EU governments should be the ones to decide whether EU-based companies can export vaccines elsewhere.

EU officials tell me that it's also been partly triggered by the deep suspicion of the "vague justification" given by AstraZeneca this week, when their chief executive insisted that the production problem was down to "lower productivity" at its Belgian plant.

Pfizer currently dispatches doses from the Puurs site here to the UK. In future, Pfizer would have to fill in an export form and wait up to 48 hours for their export request to be accepted or rejected by the Belgian government. That decision would be based on whether the company could prove that taking that batch of vaccine to the UK would not affect the existing EU agreement.