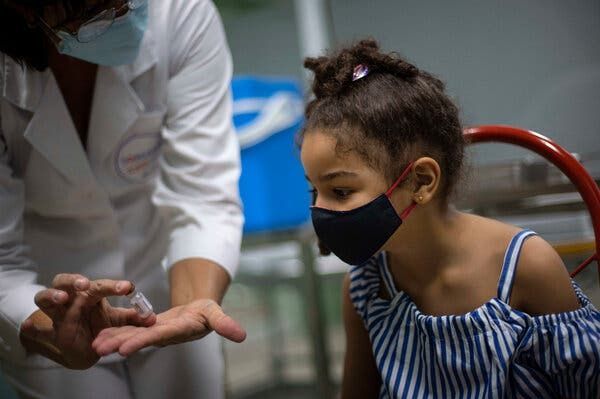 Cuba will begin vaccinating children as young as 2 against the coronavirus this week, making it the only country so far to immunize children that young.
The United States and many European countries currently allow Covid-19 vaccinations for children 12 and older. US regulators could authorize a vaccine for children 5 to 12 later this year.

Cuba’s health regulator, the Center for State Control of Medicines and Medical Devices, approved pediatric vaccination at the beginning of September. Last week, the country started immunizing 13- to 17-year-olds.

Coronavirus cases are skyrocketing in Cuba as the Delta variant spreads rapidly across the island. Cuba has recently been reporting an average of 70 new infections a day for every 100,000 residents, one of the highest rates in the Western Hemisphere.

Cuban children are being immunized with Soberana 2 and Soberana Plus, two domestically developed vaccines. Clinical trials in adults, and to a limited extent in children, have shown that the combination is more than 90 percent effective at protecting against the coronavirus, Cuban officials have said. But data from the trials have not been published in peer-reviewed international journals.

“There’s a lot of things going for it, there is a need, and they are using established technology,” Dr. Peter Hotez, dean of the National School of Tropical Medicine at Baylor College of Medicine, said about the Cuban program. “But I’m concerned about the level of regulatory oversight.”

Cuban scientists said that they have submitted papers to peer-reviewed journals, and are awaiting publication. They stressed that the Soberana vaccines use a technology similar to the one already in use in Cuba’s vaccines against other diseases.

“This is not an RNA vaccine, with no history, being administered to children,” said Dr. Vicente Vérez, the lead developer of the vaccines.

Early trials in children have shown only routine side effects and “a high degree of safety, which is what’s most important,” said Dr. José Moya, the Pan American Health Organization representative in Cuba.

Schools in Cuba have been closed through most of the pandemic, and the high cost of internet access has made online learning impossible for most children. Officials and frustrated parents are keen to get children back to school, but the reopening of classrooms has been postponed repeatedly.

So far, 56 percent of Cuba’s population has received at least one dose of a Covid vaccine, and 37 percent are fully vaccinated. The country’s health ministry aims to vaccinate more than 90 percent of the population by December.

U.S. economic sanctions imposed during the Trump administration have slowed vaccination efforts by making it more complicated and expensive to import materials. Production of Soberana 2 was halted for weeks in the spring when supplies of a vital component dwindled, Dr. Vérez said.
#Coronavirus  #Vaccines  #COVID-19  #vaccine  #Covid