Democrats opened the second impeachment trial of former president Donald Trump on Tuesday with a compelling video showing how Trump's comments at a rally on Jan. 6 were echoed by his supporters as they stormed the Capitol, pulling together clips of the violence and destruction with Trump's responses throughout the day.

The video begins with Trump repeatedly lying to supporters at his DC rally that morning about the election, saying that he won and it was stolen, before urging them to go the Capitol and to "fight like hell" or "you're not going to have a country anymore." Excerpts of the speech are interspersed with video of people in the crowd shouting "Take the Capitol!"

Nearly 10 minutes long, the video shows a full narrative of the day through news footage and social media videos posted by the rioters themselves. It follows the path of Trump's supporters from his speech on the National Mall to the Capitol grounds to breaching the building, all the while shouting "Fuck you!" and "Traitor!" at overwhelmed police officers trying, and failing, to block their path. 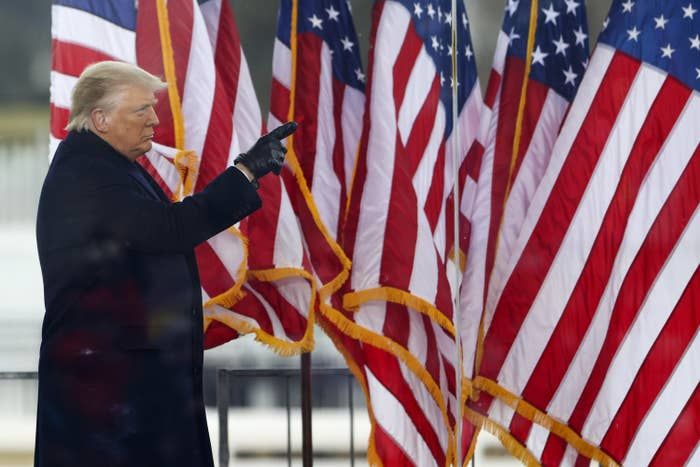 Donald Trump speaking at his "Stop the Steal" rally before the Capitol riots on Jan. 6.

The video features segments from the totality of Trump's comments that day, noting that he first spoke out about, but did not condemn, the violence more than two hours after his supporters broke into the Capitol in a tweeted video. Four hours after the Capitol was breached, Trump tweeted that "these are things and events that happen" when an election is "stolen," telling his supporters, "Go home with love & in peace. Remember this day forever!"

The House impeached Trump in January for inciting the insurrection at the Capitol. Democratic impeachment managers, led by Rep. Jamie Raskin, will continue to make the case that senators should convict Trump (they'll need 17 Republicans to join Democrats to do so) and then vote to prevent him from ever holding office again.