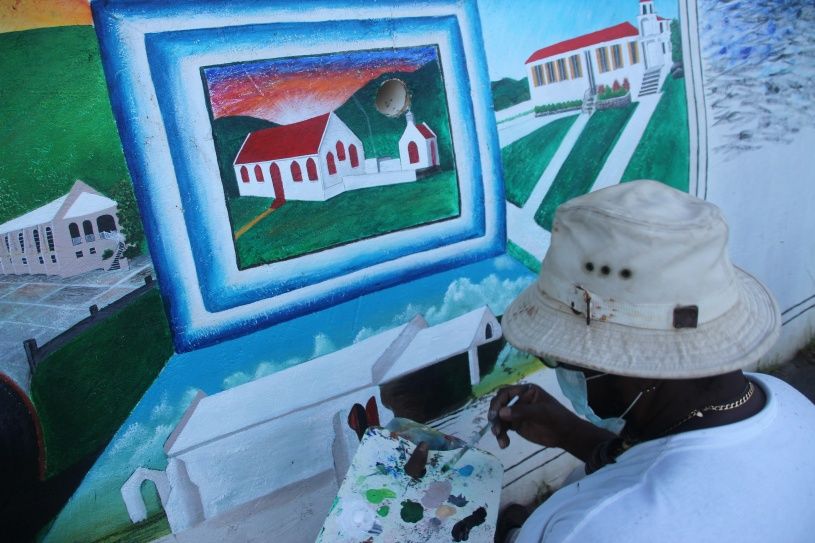 Documenting 200 Years Of Christianity Through Art

Mr. Vincent ‘Bing’ Malone has been laboring on this mural, located in the Long Look area for nearly two years now, documenting 200 years since the arrival of the Methodist missionaries on Tortola.
“I am passionate about it. Because of the lockdown I had to stop, rain has stopped me, but I have been working for a year and a half, going on two years now, but it’s coming to the finish, and I can see the light at the end of the tunnel,” Mr. Malone told BVI Platinum News on Wednesday, August 18.

He explained that the mural is divided into panels, which depicts the 200-year-old journey.

The first panels he explained, shows when the first missionaries came to Tortola. They arrived at Beef Island; at that time, the territory did not have any churches.

Other panels showed the missionaries returning and setting up church services in an open-air setting.
It then moves on to show the commencement of actual church structures and when the slaves became free.

“Where I am at is a collage of the churches, the 200 years celebration of the ministry coming to Tortola. It’s coming pretty good,” he remarked.

Malone has been painting as long as he could remember, “holding a pencil.”

He received formal training in the art in New York and while this is his first mural in the territory, more of his work is on display at his restaurant – Bings Drop-In – in Fat Hogs Bay.

“Hopefully, I am going to finish this next week. I have two more [panels], and I am going to put a lot of flowers, probably some Heritage Dancers among the flowers,” he informed.

Minister for Culture and Seventh District Representative, Deputy Premier Dr. Natalio Wheatley said when he was approached by the East End/Long Look Heritage Society for the project, he opted to collaborate with them and provided the funding for the project.
He was at the time unable to state how much has been spent on the project.

“I am pleased that it is nearly finished, and I am going to do more murals in the territory because it adds to our tourism product,” he said.

The Deputy Premier said plans are afoot to create a sports mural on the A. O. Shirley Recreation Ground in Road Town and complete one in Greenland, which has already started and other areas.