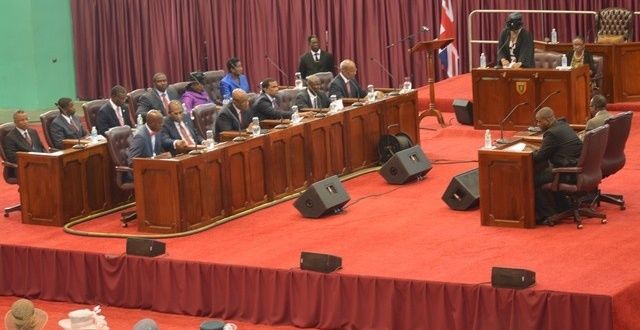 Premier and Minister for Finance, Hon. Andrew Fahie has revealed that since 2016, the funds collected for passenger tax by the BVI Ports Authority have not been turned over to Central Government. Premier Fahie’s remarks were made during Thursday’s sitting of the House of Assembly while he was responding to questions by the Leader of the Opposition on the funds owed by the entity from 2019 onward.

He continued: “Mr. Speaker, the BVIPA also owes Central Government the sum of $9,77,494.44 for passenger tax collected on the Government’s behalf since 2016, and the balance on the loan from the Central Government to assist with the works at the C. B. Romney Tortola Pier Park.”

Hearing his response, Leader of the Opposition, Hon. Marlon Penn asked: “I just want a little clarity on the response; so for the period as outlined for each year is what is remaining, what is owed still, or that’s what was owed at the end of the year?”

The Premier replied: “Mr. Speaker, from as far as what they are saying, it seems like that’s what was owed at that time, but some of the debt has been taken care of. So each year absorbs some although it rolls over with some of the deficits, but I can bring back all those information in detail for the member so it can be clear, because I have learned with the Leader of the Opposition, do not attempt to answer these in this manner without getting it from the ministry, and the department is doing it so that he can have accurate answers and I do not mislead this honourable house.”

He added: “But Mr. Speaker, I know about two of them he would be able to answer, so you wouldn’t have to ask them which is the money owed for 2016 and the money he took from the East End/Long Look sewerage and put it down in the Pier Park project.”

After hearing the Hon. Premier’s response and Hon. Penn’s attempt to reply, Speaker of the HoA, Hon. Julian Willock intervened.

“Honorable Members I think we are going down a little road that is undesirable and I am going to ask both members to stick within the guidelines and the rules: a question asked, question answered; no editorial, no statements, no unnecessary comments unless it supplements or enhances the question or the answer. Thanks for agreeing to that Premier and Leader of the Opposition.”

“Mr. Speaker, I am not surprised at all because it seems to be consistent in the behaviour,” Hon. Penn replied.

It was at that time that the Hon. Premier countered, “The pot calling the kettle black,” and the Opposition Leader reacted, “Hear the frying pan over there.”

The Speaker had to intervene again. “Honorable members! So we don’t have an agreement?”

“We had an agreement Mr. Speaker, I just be here sitting and the member just hit those punches, and when you go on the street, it sticks in people’s minds, and he knows it, that is why I have started to respond to clear them up. He knows what he is doing here in this house and he knows there are certain keywords people listen to: “deficit”, “owe”, so if you do not clear these up, the member knows what he’s doing. He’s an experienced member, but I am too old a cat to get fooled by a kitten,” Premier Fahie said.

Hon. Penn responded: “Mr. Speaker, I don’t know what misinformation I am giving. If you make $10 million and you spend $12(M), that is a deficit.”

“It is intentionally misleading and there are other figures that would be able to bear out what he is saying is not so! He is trying to brand this government in the wrong way on the street to the regular persons listening!” the Premier shouted, adding that the Opposition Leader is making statements in the absence of COVID-19 and other factors.

Seeing the outbursts continuing, the Speaker had to order a two-minute recess of the whole house.