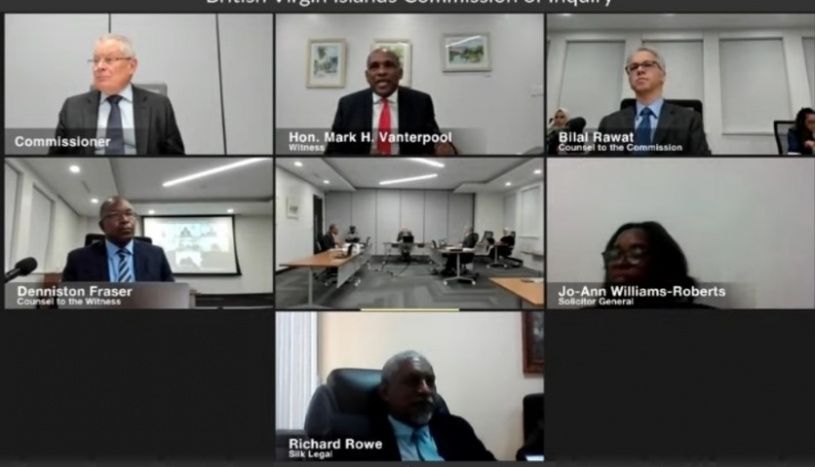 Draw Your Own Conclusions! Vanterpool Not In Any Back & Forth With CoI Over Pier Park Project

Former Minister for Communication and Works, Hon. Mark Vanterpool has insisted that he would not be drawn into a back and forth with the Commission of Inquiry (CoI) over the controversial Pier Park Project.

Hon. Vanterpool, who is also a member of the Opposition, appeared as the CoI’s first witness today, September 27, for the second time to address certain aspects of the project, such as other witness statements that were red-flagged by the CoI.

“I want to make a very clear point, I am not challenging the expertise of the board or public servants. I am just saying very clearly the government that I was involved in at the time they rated that this project be changed in its scope. It doesn’t matter who were the experts before, whatever they were doing. In our view, what they were about to do was not the right thing that suited the territory and the policy of the new government that I was involved in decided to change course,” he remarked.

He added, “I am letting you know from my point of view and the investigation that we were doing at the time. All what they would have said and all what they were doing to me as Minister were futile in terms of satisfying the needs of the territory at the time for cruise tourism as was clearly stated to me by the group of users that would use the facility. So I want to make it clear, whatever they said before, I am not going back to all those and I am not answering any questions on them.”

The Opposition legislator said he did not want to argue today.

“I am not going to continue arguing or saying whether they were right or wrong; you make your own conclusions. I am letting you know what I gave you evidence on and what direction I think we should go. I just want to be clear on that.”

He further said to Counsel for the CoI Mr. Bilal Rawat that he has provided evidence to the best of his recollection.

“All the things you are talking about I would say maybe relevant, but I have given you the evidence as to what I did to pursue the project, and I do hope that you respectfully understand whether it was the correct direction or not; I am giving you the evidence of how the project was pursued. In my view, I have done nothing unlawfully. I am not here to discredit any other evidence, and I am not here to add any more evidence,” he pointed out.

The former National Democratic Party (NDP) administration came under intense fire because of the project, which was initially estimated to cost $50 million and has a final cost of approximately $85 million.

However, Vanterpool has always maintained that the first figure was an incomplete assessment, and the project did not have a cost overrun.