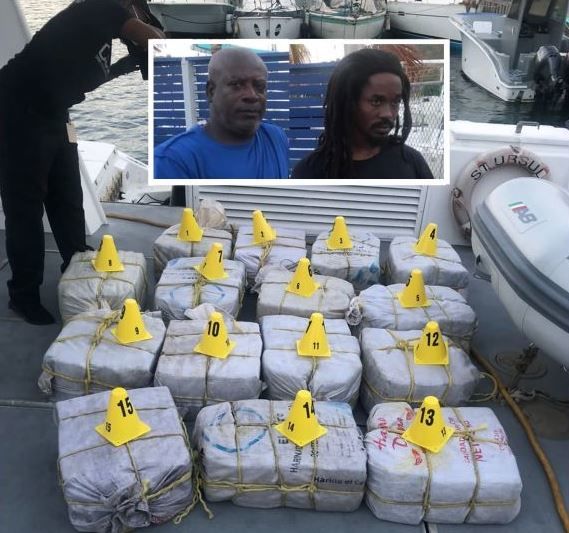 Pedro Samuel Sr, 58, of Diamond Estate, and Reno Alphonso, 27, of Fort Hill, who were both charged with possession of a controlled drug with intent to supply, were remanded to prison when they appeared virtually at the Magistrate’s Court today, August 17, 2022.

Officers of the Royal Virgin Islands Police Force Marine Branch had charged the two men after intercepting their boat off Cooper Island and subsequently discovering what is believed to be cocaine on Saturday afternoon, August 13, 2022.

Men said they were out fishing

According to Crown Counsel Lyn Dailey, when stopped by police the two men said they were out fishing.

When boat was searched 1 canvas bag containing suspected cocaine was found and when another search was made 14 canvas bags also believed to contain cocaine were found in another area of the vessel.

Both men maintained their silence when shown the substances, according to the court.

Meanwhile, Alphonso was also charged with Failure to Comply with Lawful Order Given by Police.

It was mentioned in court today that Alphonso had pleaded guilty to a 'possession of drugs' charge in 2019 when police also intercepted a vessel he was in and was fined 4,500.

Magistrate Benjamin remarked that it seems the defendant has now "graduated" to bigger things, given the quantity of the illegal drugs in this matter.

Both men were then denied bail by Magistrate Benjamin.

Samuel Sr and Alphonso, who will be brought back to court on October 12, 2022, are being represented by Mr Nelson Samuel and Mr Steven R. Daniels.