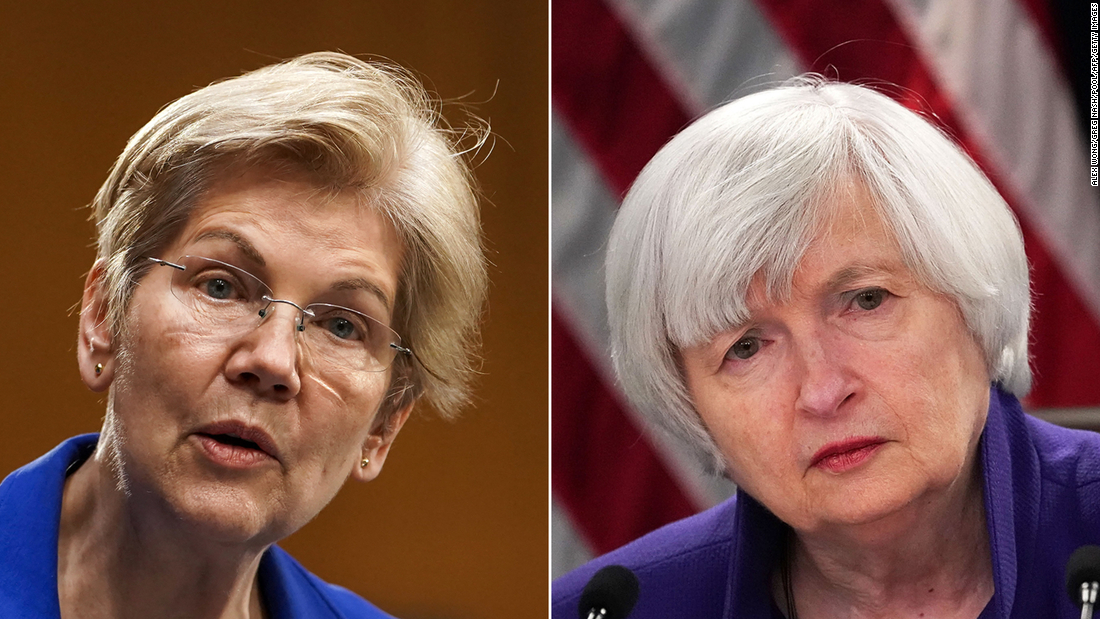 Senator Elizabeth Warren wants to know why the Biden administration isn't more concerned that BlackRock manages $9 trillion in assets -- more than the annual GDP of any country not named the United States or China.

At a hearing held by the Senate Banking Committee, Warren noted that the Federal Reserve began designating very large banks as "too-big-to-fail," giving them stronger oversight granted by Congress in the Dodd-Frank act. That bill, drafted in the wake of the 2008 financial crisis, created the Financial Stability Oversight Council, a regulator that can give special scrutiny to banks deemed systemically important -- at the time, those with more than $50 billion in assets.

So why isn't BlackRock (BLK), which oversees 180 times that amount of assets, designated too big to fail?

"If a $9 trillion investment company failed would that likely have a significant impact on our economy?" Warren asked Treasury Secretary Janet Yellen.

Yellen said she believes it's less important to designate a particular company and more important to scrutinize the actions they take. For example, in 2016 and 2017 the FSOC investigated the potential damage caused by massive withdrawals at open-end mutual funds, which forced asset managers to sell off assets, creating fire sales. That very thing happened in March 2020.

"With respect to asset management, rather than focus on designation of companies, I think it's important to focus on an activity like that and consider what the appropriate restrictions are," Yellen said. "It's not obvious to me that designation is the appropriate tool."

Warren was having none of that. Isn't the designation itself what gives the Fed oversight, she shot back? And since BlackRock isn't designated, it doesn't have that additional scrutiny, she noted.

'BlackRock is not a bank'

BlackRock, in response, noted that the money it manages doesn't belong to the company — and two-thirds of its managed assets are slated for retirement savings.

The company said, however, that it does support regulatory reform.

BlackRock noted that regulators around the world have investigated the asset management industry, concluding that they should be regulated differently from banks.

"BlackRock is not a bank, and as an asset manager, we are a heavily regulated company," it said.

Yet Yellen conceded that she thinks "it's appropriate to designate institutions whose failure would pose a material risk to US financial stability."

So then Warren wanted to know why wouldn't a $9 trillion institution like BlackRock pose a risk if it failed?

Yellen answered only that the FSOC had investigated BlackRock in the past and will continue to do so in the future.

Warren, none too happy with that response, called for more immediate action.

"When the party is going strong, it's the job of the regulators to take away the punchbowl," she said. "My view on this is Congress gave you the tools to monitor the risk and it is important to use them."