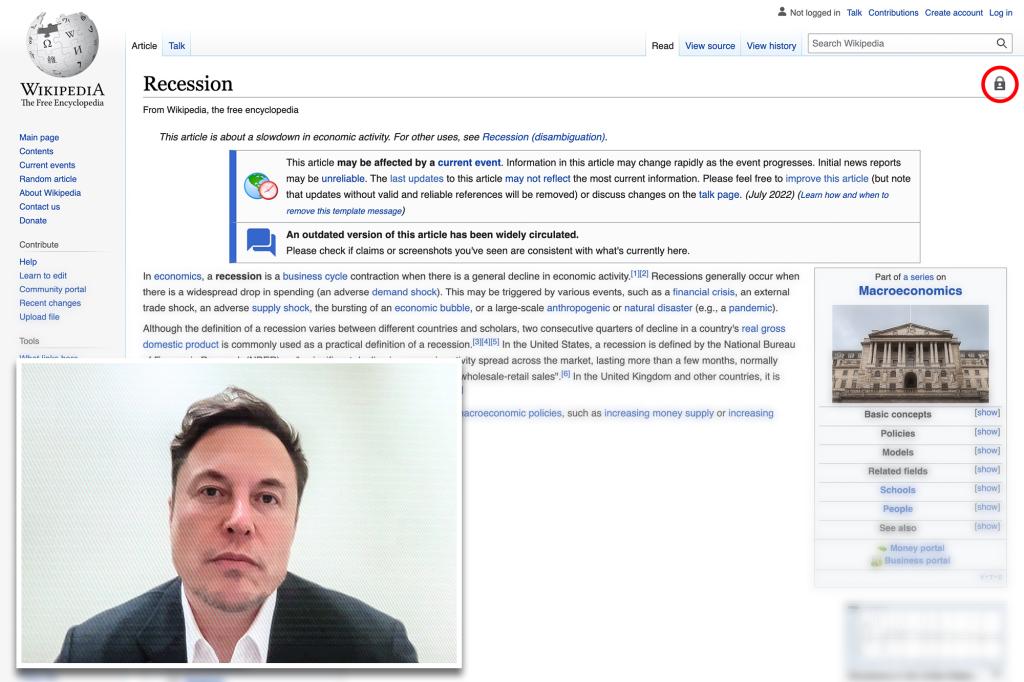 Elon Musk hit out at Wikipedia on Friday for "losing its objectivity" after the online encyclopedia blocked users from editing its "recession" page.

Elon Musk slammed Wikipedia on Friday for “losing its objectivity” after the online encyclopedia blocked users from editing its “recession” page — prompting accusations that it was running interference for the Biden administration.

Musk, the Tesla CEO and the world’s richest person with an estimated net worth of $263 billion, tagged Wikipedia co-founder Jimmy Wales in a tweet on Friday.

Wikipedia blocked users from revising its “recession” page after visitors to the site engaged in a frantic editing war over the definition of the term, which is being disputed by the Biden administration following the latest economic data showing a drop in GDP.

One Wikipedia user known as “Soibangla” edited the “recession” page to remove reference to the standard definition of the term.

The user added a line that read: “There is no global consensus on the definition of a recession.”

As of Friday morning, the page included a lock icon in the upper right corner indicating that it was placed in “semi-protection” mode whereby “unregistered users … as well as accounts [that] are not confirmed or autoconfirmed” would not be able to make changes to the text.

“Wikipedia changed the definition of recession to favor the Biden regime, and then locked the page,” tweeted right-leaning social media personality Mike Cernovich. 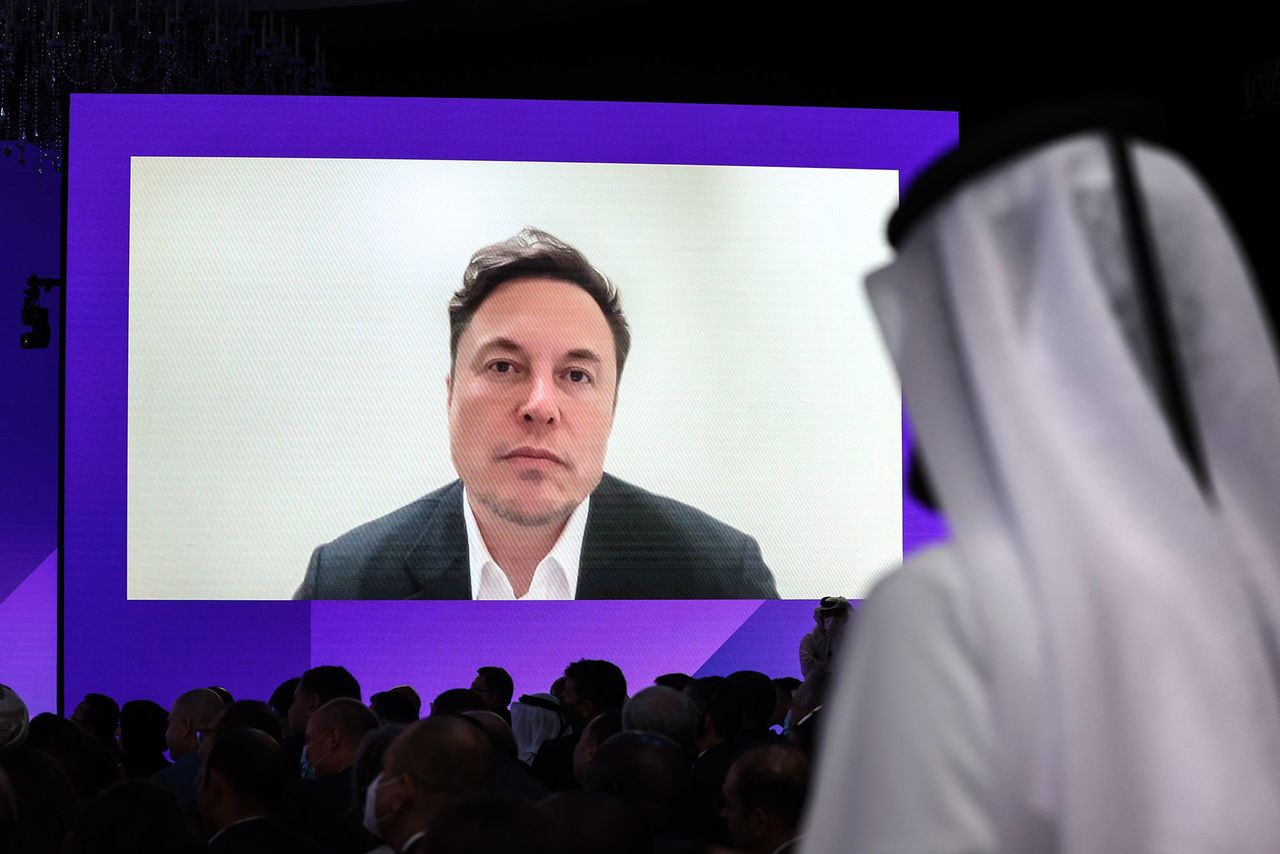 Elon Musk took Wikipedia to task on Friday for “losing its objectivity.”

The change comes after dozens of people flocked to the page to make edits to the entry. They were most likely spurred by Thursday’s Commerce Department report indicating that the country’s GDP fell by 0.9%.

This is the second consecutive quarter that the national economy has contracted — which meets the traditional definition of a recession.

But the Biden administration has insisted that the economy is not in a recession. The president and his aides have steadfastly refused to use the word in briefings to reporters.

“This is not an economy that’s in recession,” Treasury Secretary Janet Yellen told NBC’s “Meet the Press” on Sunday.

“But we’re in a period of transition in which growth is slowing and that’s necessary and appropriate and we need to be growing at a steady and sustainable pace.” 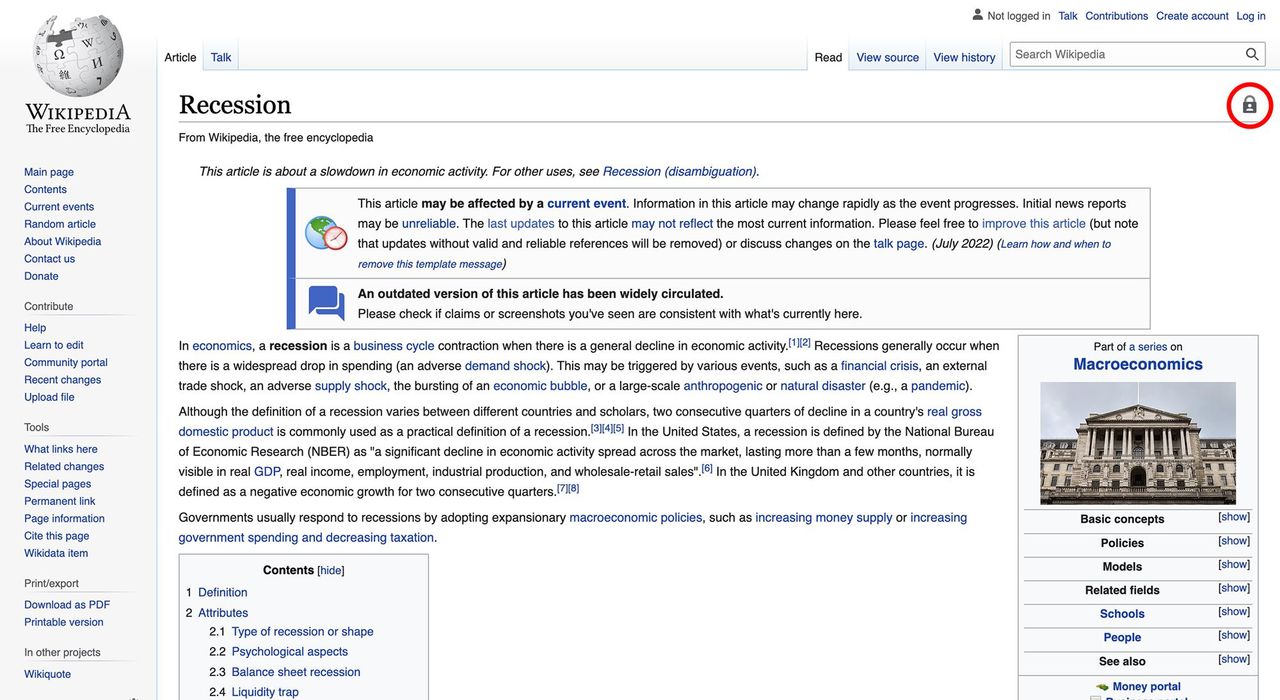 Wikipedia prevented users from editing its entry on “recession.” 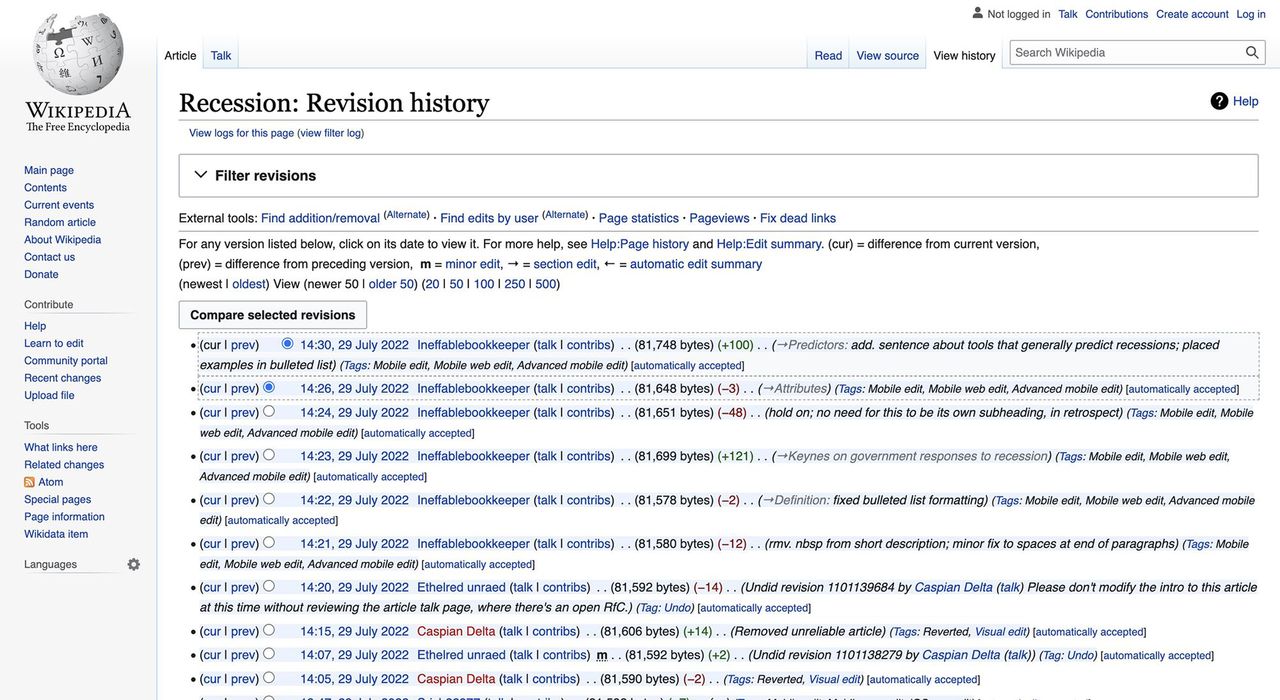 Dozens of users engaged in an editing war, prompting the site to restrict editing to registered visitors. 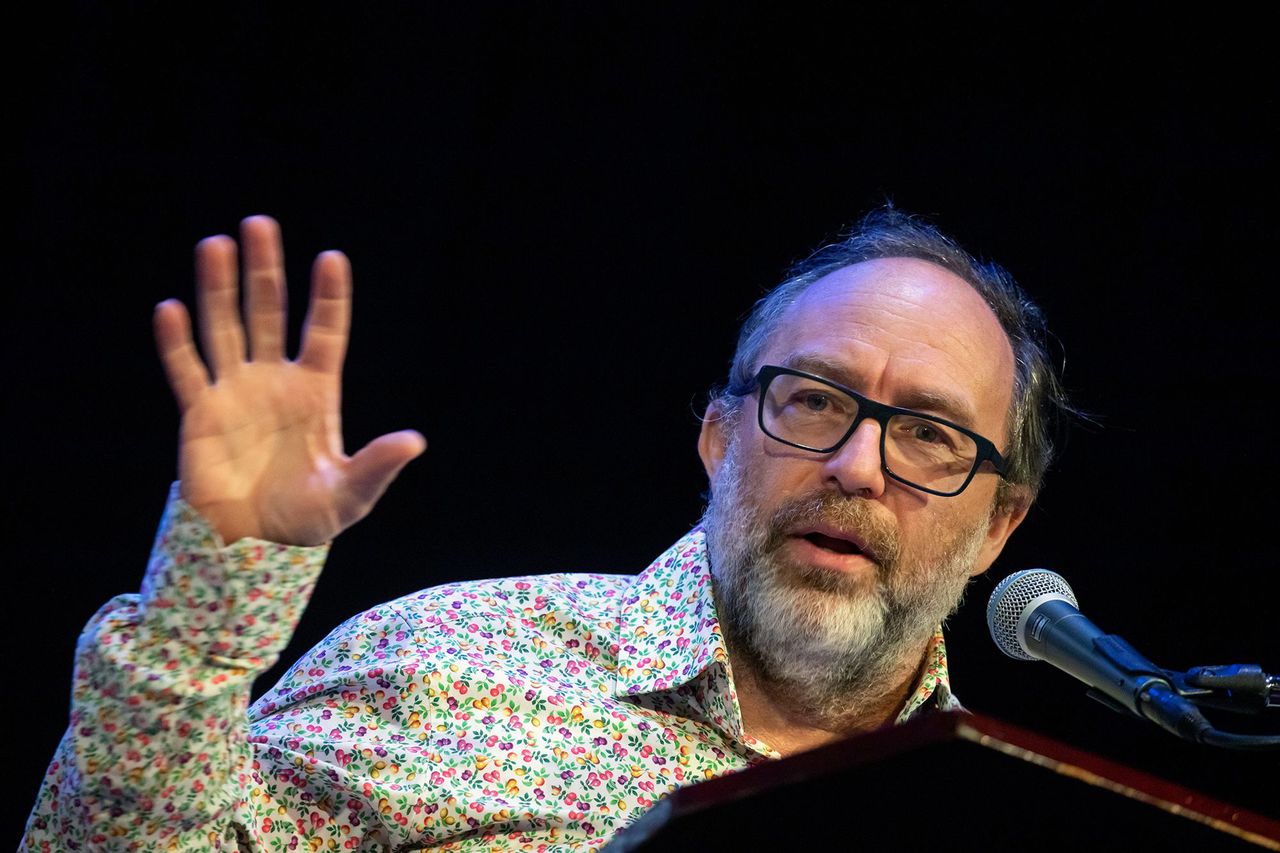 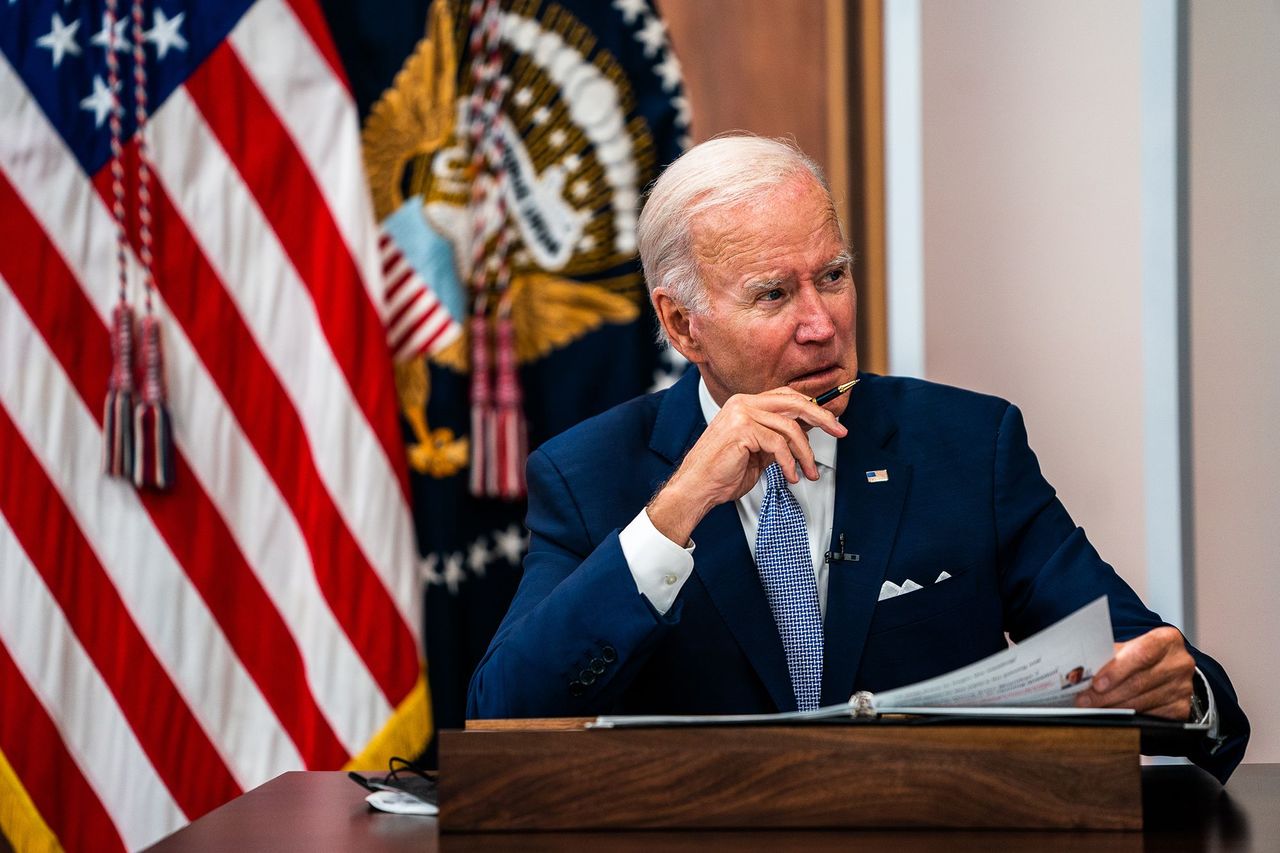 President Biden has denied that the economy is in recession despite two straight quarters of negative GDP growth.

Whether the US is technically in a recession is a determination that is usually made by the National Bureau of Economic Research, which is a private, nonprofit research organization based in Cambridge, Mass.

The NBER bills itself as an apolitical group that is “committed to undertaking and disseminating unbiased economic research among public policymakers, business professionals, and the academic community.” 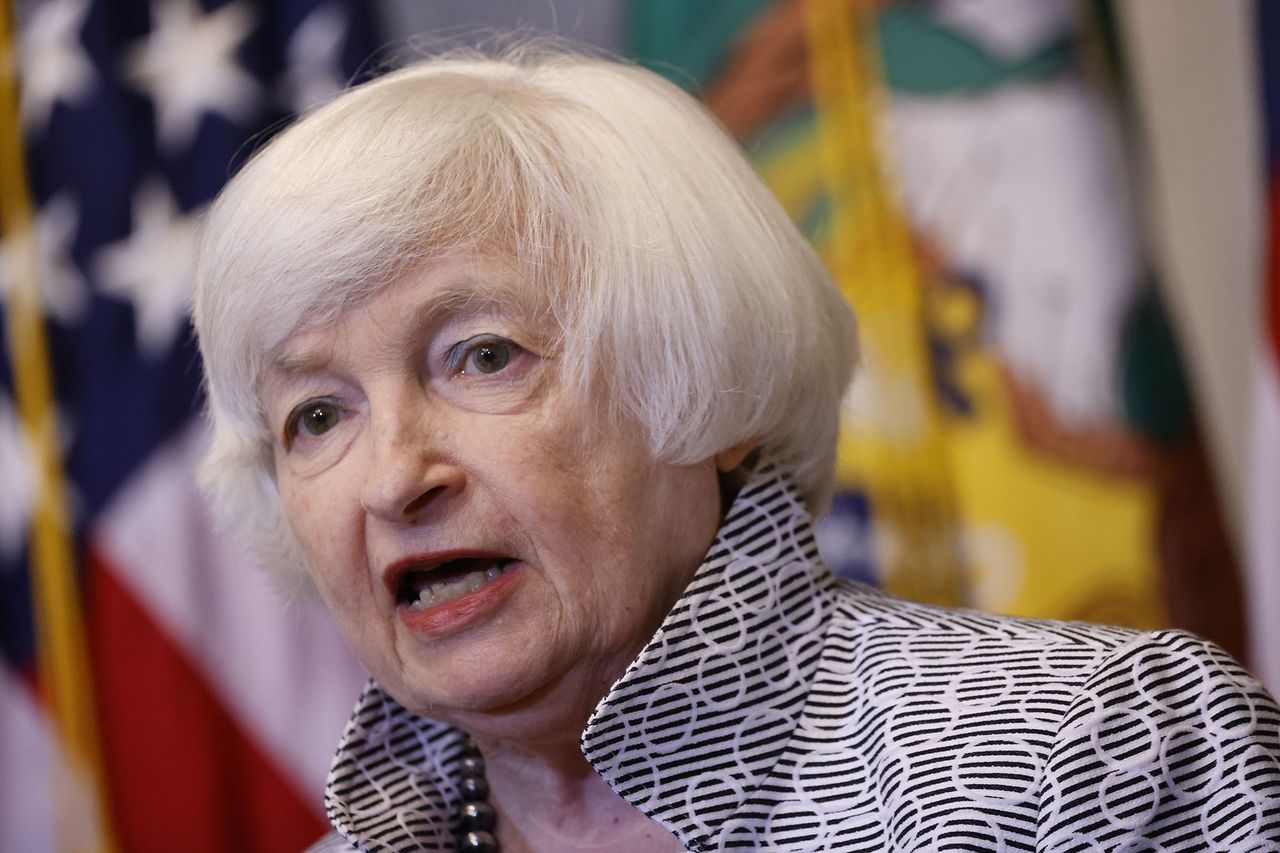 Treasury Secretary Janet Yellen has also refused to say that the country is in a recession.

“Semi-protection is useful when there is a significant amount of disruption or vandalism from new or unregistered users, or to prevent sockpuppets of blocked or banned users from editing, especially when it occurs on biographies of living persons who have had a recent high level of media interest,” according to the Wikipedia page.