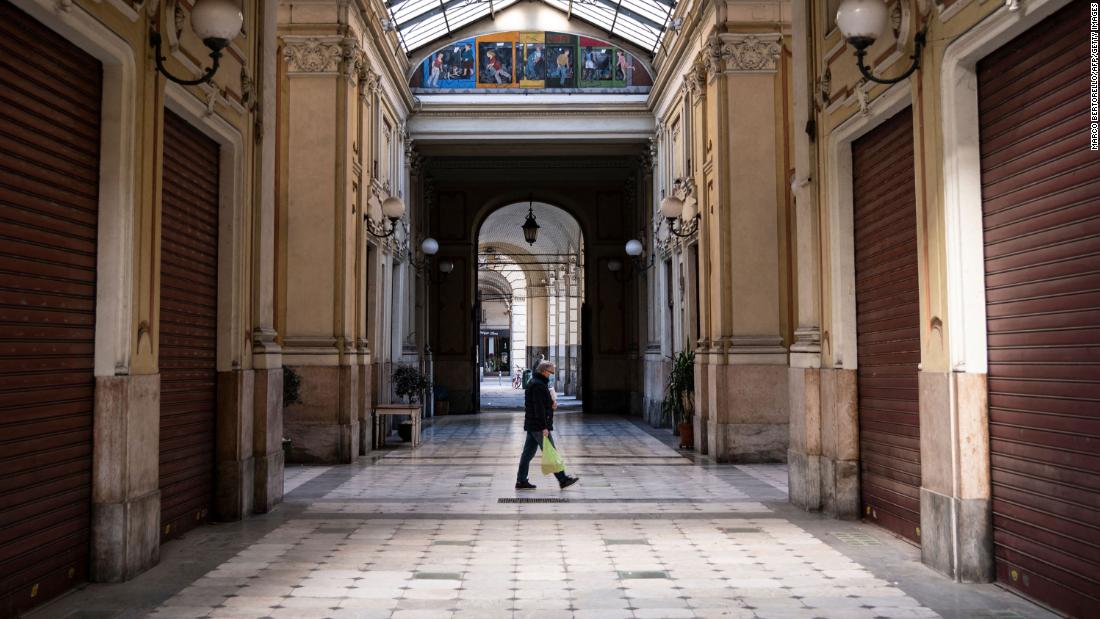 Europe has missed its chance to stop the third wave. The US could be next

Europe has missed its chance to stop the third wave of the coronavirus epidemic before it got out of control. Now it's paying a high price for it, with new lockdowns being imposed across the continent.

On Thursday night, France announced new restrictions on 16 regions, including Paris and Nice, though President Emmanuel Macron has refused to reimpose a national lockdown as cases soar.

On Monday, large parts of Italy including the cities of Rome and Milan once again entered a strict lockdown, while in Spain, all regions except for Madrid have decided to restrict travel over the upcoming Easter holidays. The German capital of Berlin has halted the planned easing of its lockdown too, quoting a rising number of Covid-19 cases.

Critics say the new restrictions have come too late and that Europe's current problems can be traced back to politicians too eager to start easing.

"The second wave did not end, the lockdown was interrupted too soon, to let people go shopping for Christmas," French epidemiologist Catherine Hill told CNN. She said infection levels remained at a high level. "Recently admission in intensive care units have [been increasing] regularly, and the situation is now critical in several parts of the country, including greater Paris."

A more contagious variant of the virus, known as B.1.1.7, seems to be the common culprit behind the chaos. New preliminary data published in the British Medical Journal suggest that the strain, first detected last year in the United Kingdom, may also be more deadly.

Alessandro Grimaldi, the director of infectious diseases at Salvatore Hospital in the Italian town of L'Aquila, told CNN the new more contagious variant had "changed the game," adding that "inevitably, the measures taken to prevent the infection have to become more drastic."

World Health Organization warned about this nearly two months ago, when it became clear the UK variant was circulating in most of Europe. "Once it becomes dominant, it may impact the epidemic curve overall and lead to the need for a more restrictive approach to the public health and social measures that need to be in place, so that rates of transmission can decrease," WHO's Senior Emergency Officer for Europe, Catherine Smallwood, said at the time.

That has now happened. Germany's center for disease control announced on March 10 that the UK variant had become the dominant strain in Germany. The new variant is also responsible for the majority of new cases in France and Italy, according to health officials there. In Spain, B.1.1.7 is now the dominant strain in nine of the country's 19 regions. 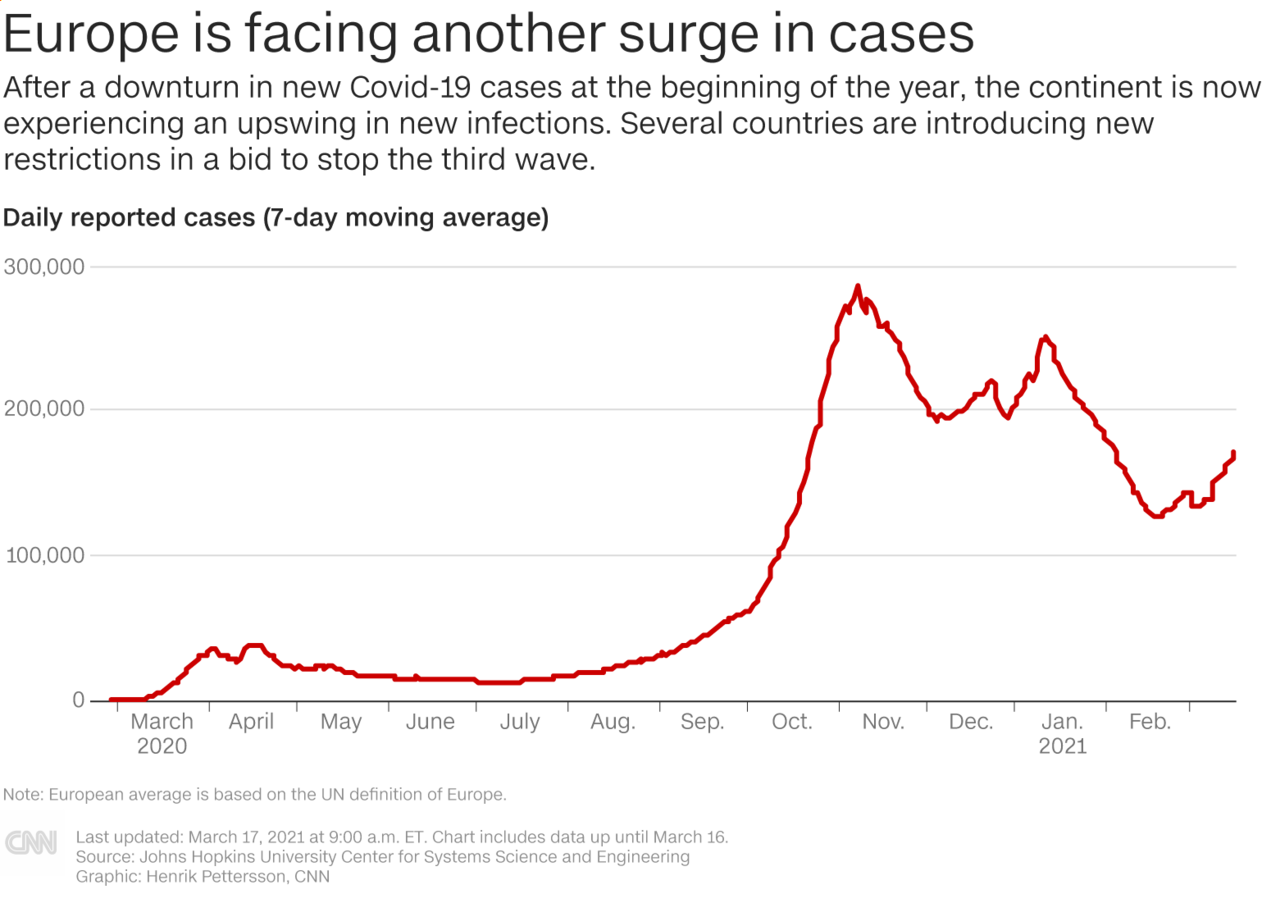 The worsening situation in Europe is becoming a cautionary tale for the United States. The variant causing a renewed crisis across the continent is also spreading fast in the US. The US Centers for Disease Control and Prevention has projected it will become the dominant strain in the United States by the end of this month or early April.

But there is another reason why US experts are worried about what is happening in Europe right now.

Germany, France, Italy and Spain all avoided the huge spikes in infections that had paralyzed the United Kingdom after the Christmas holiday. Their infection levels were either stable or or showing signs of decline just a few weeks ago. With vaccination rollouts starting, albeit slowly, across the continent, people were starting to see the light at the end of the tunnel.

But while the trends looked promising, the case numbers were still very high. And that became a major problem when the new wave started -- making the new lockdowns necessary, Grimaldi said.

"It's not easy to do lockdowns, because of the economic despair it brings ... the life style change it brings," he said. "But they are indispensable in trying to make the virus stop."

He said that data from a recent study by the University in Bologna has shown that the most stringent lockdown measures, refered to as "the red zones" in Italy do work -- leading to as much as 91% drop in number of Covid-related deaths.

A delay in the decision to impose lockdowns can be deadly. The Resolution Foundation, a British think tank, said Thursday that an extra 27,000 people died of Covid-19 because the government delayed the start of the country's latest lockdown until January, despite evidence of fast rising cases in December. 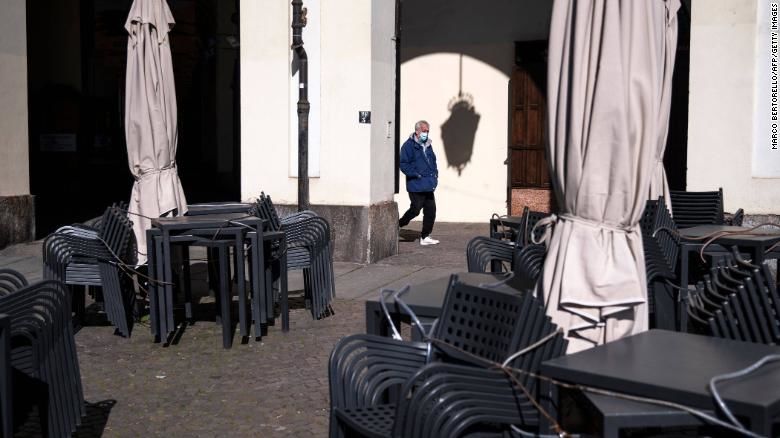 American public health officials are worried the US is heading in the same direction -- with some states starting to ease up on safety measures even as case numbers remain high. "When you see a plateau at a level as high as 60,000 cases a day, that is a very vulnerable time to have a surge, to go back up. That's what exactly happened in Europe," Dr. Anthony Fauci, the director of the National Institute of Allergy and Infectious Diseases, told CNN.

He observed that after promising declines in Covid-19 numbers, some European countries "pulled back on public health measures" which has led to the new spikes.

Mike Tildesley, an infectious disease modeling expert at the University Warwick and a UK government scientific adviser, said that the slower rollout of vaccines in many European countries means they are facing a higher risk of seeing large waves of new cases. "Sadly until nations get close to herd immunity we are likely to see waves of infection occurring as countries cycle between phases of lockdown," he said.

Grimaldi said that while vaccination plays a major role in fighting the epidemic, it has to come hand-in-hand with the safety measures, because the more the virus keeps circulating in the population, the higher the chance it could mutate further. "The virus will try to survive despite the vaccine, so lockdowns are really the only way to stop the virus from circulating," he said.

The World Health Organization on Thursday warned that Europe's vaccination campaigns aren't yet slowing transmission of the coronavirus. The continent recorded more than 1.2 million new infections last week, and more than 20,000 people a week are dying of Covid-19.

"The number of people dying from COVID-19 in Europe is higher now than it was this time last year, reflecting the widespread hold this virus has," Dr. Hans Kluge, the WHO's regional director for Europe, said.

And the pandemic is "moving eastwards," Kluge added, with infection rates and deaths in central Europe, the Balkans and Baltic states among the highest in the world.

A new model published in The Lancet journal on Thursday showed that vaccinations alone might not be enough to contain the epidemic, stressing the need for gradual easing of the restrictions rather than a big bang reopening.

Hill, the French epidemiologist, added that testing must also remain a key part of the strategy. "To control the epidemic one needs to test massively the population in order to find and isolate the carriers of the virus," she said, pointing to the estimated 50% of infections that are caused by individuals who do not know they have Covid-19.

The new wave of higher case numbers isn't limited to Europe. Case numbers have increased 10% globally over the past week to over 3 million new reported cases, according to WHO's latest situation report.

The number of new cases peaked in early January, but then declined for four weeks in row before increased for the past three weeks. The number of people dying is still declining and has dropped to below 60,000 per week last week, the first time this happened since early November.