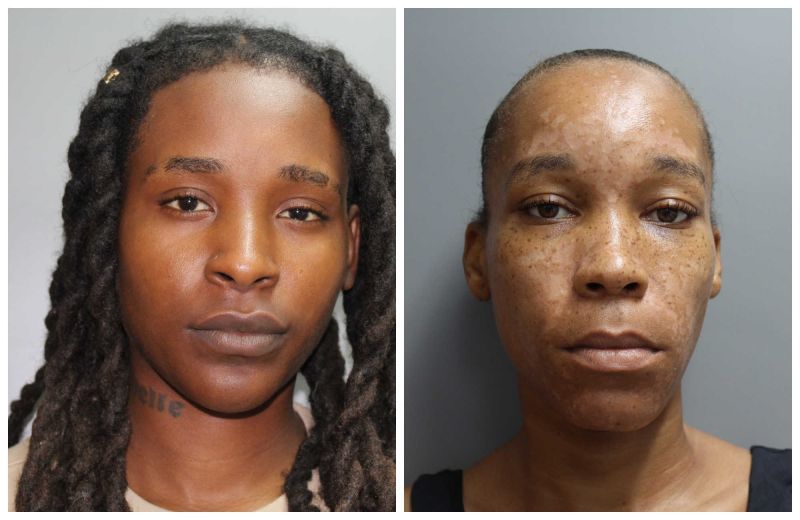 Two women appeared before a judge in the V.I Superior Court on Friday on domestic violence charges following an altercation.
Michelle Andre was arrested on multiple charges including first-degree burglary, aggravated assault and battery, simple assault and battery — all as acts of domestic violence. She was also charged with carrying a dangerous weapon, damaging or tampering with a vehicle and destruction of property.

Lyodelie Romain was arrested on charges of third-degree assault as an act of domestic violence, simple assault and battery, carrying a dangerous weapon and damaging or tampering with a vehicle.

Their arrests follow an altercation at Romain’s residence on October 11.

According to the probable cause fact sheet, Romain called the 911 Emergency Call Center on October 11 at 4:30 pm, stating that her ex-partner, Michelle Andre, came to her residence, broke the door down and assaulted her inside her home. When police made contact with Romain later that day, she said the two were in a complicated relationship and she had called it off a few weeks prior. She stated that around 1:00 p.m., Andre called her phone to speak with her but she was being very disrespectful, hurling insults at her. Romain said that she told Andre, “If you’re going to call my phone, you better talk to me with respect,” and then she hung up the phone. Andre called a second time, cursing profanity, Romain hung up the phone again.

Romain said she was in the kitchen washing dishes when she saw Andre walking towards her apartment. Andre came to her kitchen window and started cursing at her. She said she was ignoring Andre, but since she was not getting the satisfaction that she was looking for, Andre decided to remove the kitchen window, stretch her body partially through it, and punch Romain in the face. Romain said she managed to push Andre out and close the window. Andre stayed in front of Romain’s apartment cursing profanity and making a scene. She said that Andre felt disrespected and began taking her frustration out on her vehicle, a green Honda Civic. Andre broke the rear glass of her car with a rock and damaged the vehicle’s windshield with a baton.

According to the documents before the courts, Andre then ran to the rear of Romain’s apartment, kicked the back door down and entered the apartment. Romain said Andre immediately approached her and punched her in the head. Someone inside the apartment got between the two ex-partners to prevent any further altercation.

Romain said the entire situation was bothering her so she decided to walk to Andre’s house to speak with her mother. When she got to the residence, she said she realized that Andre’s mother was not home. She then observed that Andre was walking towards her. Andre approached her with a baton in her hand, waving it around and threatening to strike her with it. Romain stated that at that time, she took her knife and punctured the tire of an unknown vehicle parked in front of Andre’s residence. Andre heard the air leaking out of the tire and immediately rushed Romain with the baton and struck her in the head and back. The two women began to fight. Romain said she stabbed Andre about twice in her back area during the altercation. She said she did not mean to stab Andre, but she was defending herself and everything happened so quickly.

Police observed Romain’s vehicle, a green Honda Civic, with a broken rear glass and windshield. The back door of Romain’s residence was off the hinges and on the floor. The door frame was also damaged.

Police met with Andre at the Juan F. Luis Hospital and observed her with two lacerations to her back area with a red substance that appeared to be blood. She told police that Romain had stabbed her and slashed the tire of a vehicle. The two women were arrested.

In court on Friday, a judge ruled that both women would need to post an unsecured bond for the $15,000 bail amount to secure their release. They both will have third-party custodians and must abide by a curfew. Andre’s curfew is set from 6:00 p.m. to 6:00 a.m. while Romain’s curfew is set from 9:00 p.m. to 6:00 a.m. They must both report to the Office of Probation every Tuesday.

They are both barred from leaving St. Croix without the court’s written permission and must surrender their passports. They must stay at least 500 ft away from each other and shall have no contact with any witnesses in the matter.