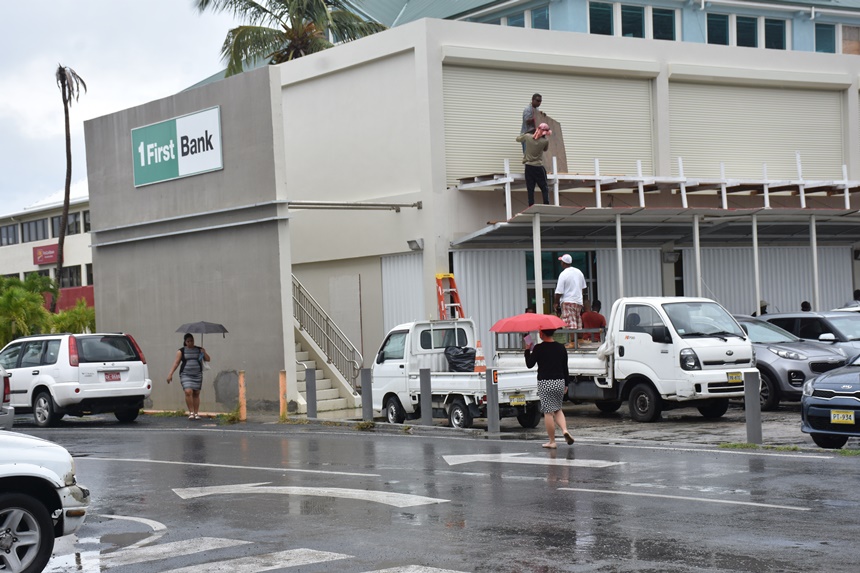 By Kamal Haynes, BVI News Staff Several residents and businesses were busy making final preparations ahead of the potential tropical cyclone that is forecast to impact the British Virgin Islands this afternoon into Thursday morning.

Businesses in the Road Town capital were observed executing a number of hurricane preparedness measures such as battening down windows and closing hurricane shutters.

These establishments include FirstBank on Nibbs Street, where workers were seen on the exterior of the building adding layers of protective materials to shield the glass windows from any potential damage from projectiles.

On Fishlock Road, a popular beauty store was observed boarded-up, with its owner and staff adding a number of sandbags to the doorways of the store to minimise the entry of water in the event of flooding.

As it relates to the marine side of things, number of vessels were observed strapped-down or made secure inside local marinas.

Busy roadways and traffic back up

In the meantime, motorists saturated the roadways into the city, causing congestion along a number of popular roads in and out of town.

Such roads included Administration Drive, De Castro Street and Waterfront Drive, which saw cars queued in bumper-to-bumper traffic as far back as Government House across from the Queen Elizabeth II Park.

Some of these motorists appeared to be on their way from work while others were observed heading to several near-by banks and business places.

Residents were also spotted at a number of the supermarkets such as Bobby’s Marketplace, OneMart Superstore, and RiteWay Food Market conducting last-minute shopping.

In a statement today, Wednesday, July 29, Premier Fahie urged members of the private sector to follow the government’s lead in closing their businesses early.

He said: “Above all, we want to protect our people from being out in any hazardous conditions. As such, public offices will close from 1 pm today, with public officers working from the safety of their homes in the afternoon.”

“I would encourage persons in the private sector to follow suit. Yes, your business is important, but your people are an asset you cannot replace,” he added.

The Premier further urged all BVI residents “to do one more check on their homes, businesses, emergency supplies and critical documents” before the brunt of the weather system passes the territory