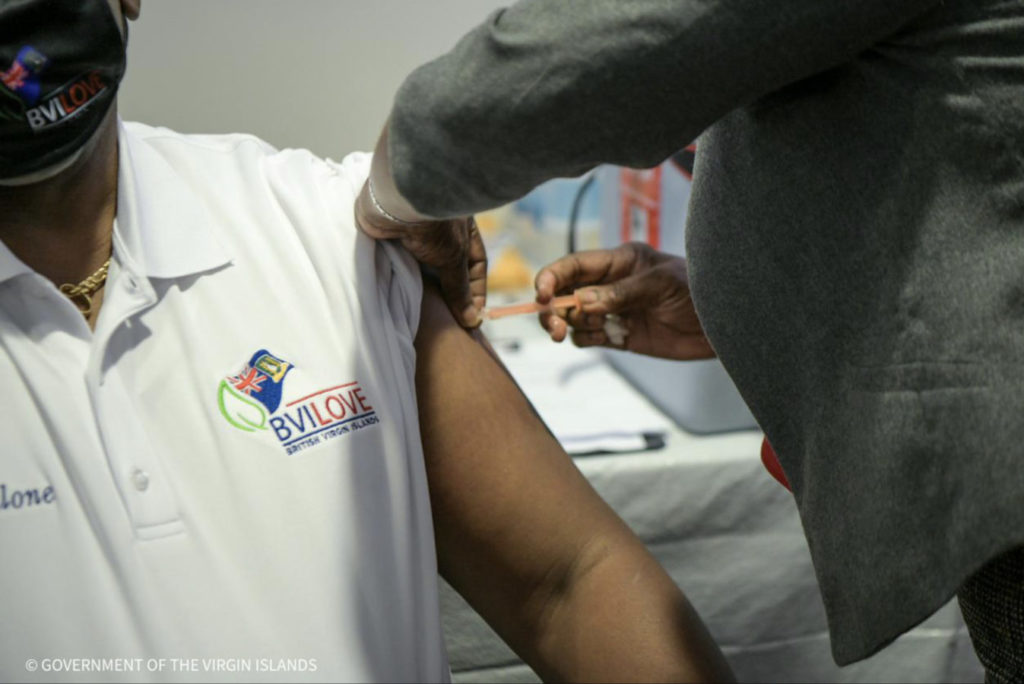 Ten persons including members of the British Virgin Islands government and the Opposition were first in line to receive the first dosage of the AstraZeneca COVID-19 vaccine at the Dr D Orlando Smith Hospital this morning.

Of the 10, the government members included Health Minister Carvin Malone who was the first person to be vaccinated, Natural Resource Minister Vincent Wheatley and Speaker of the House, Julian Willock.

The Opposition members include leader Marlon Penn and Representative of the Fourth District, Mark Vanterpool.

Media personality Cathy Richards became the first female in the territory to take the vaccine while the Health Minister’s wife was the second.

Premier to take vaccine next week

Following the absence of Premier Andrew Fahie not being a part of the officials leading by example in taking the vaccine, questions were raised by the media as to why he had opted out.

Premier Fahie said he wanted to ensure all the relevant persons who need the vaccine get it first, as the territory only presently has a limited number of vaccines that can reach 4,000 persons.

He, however, assured the public he will be taking the vaccine on a date to be announced for next week and invited the media to attend to witness the occasion.

“Next week I’m going to be vaccinated, allowing with due respect the Governor who has worked hard with the United Kingdom to bring the 8,000 dosages and the Minister of Health and the rest of the front line, and some other members said they want to go ahead,” Fahie stated.

He added: “I’ve made a decision to allow our front line to as many as possible, especially in the health care section to get ahead and next week I will be taking the vaccine. It’s as simple as that.”

In the meantime, Acting CMO Dr Georges said the health officials will be using a registration portal to ensure a safe and effective roll-out of the vaccination process across the territory.

“Once the portal is up — and it probably should be up today — they can register online. The numbers will be published very soon, they can call in and they can register. So what we’ll be doing is collecting their information and putting it into an electronic immunization register. So that means that we will be capturing all the data that we require,” Dr Georges explained.

He added: “The first week or so we’ll be doing mostly the healthcare workers and the frontline workers, after that we would be looking to open up the vaccination centres and allowing other persons to basically be scheduled to be vaccinated. So once those are open, we begin scheduling the persons who have registered to come in and be vaccinated.”

Important to register to avoid issues

Dr Georges further stressed the importance of residents utilising the portal as opposed to walking into the nine facilities across the BVI which he said will be announced in short order.

He said this measure is to minimize any chances of errors and to ensure all the correct details are aligned with the specific patient getting the vaccine.

The second dosage is usually administered between four and 12 weeks, but according to the Acting CMO, it may be provided six weeks after receiving the first dosage.