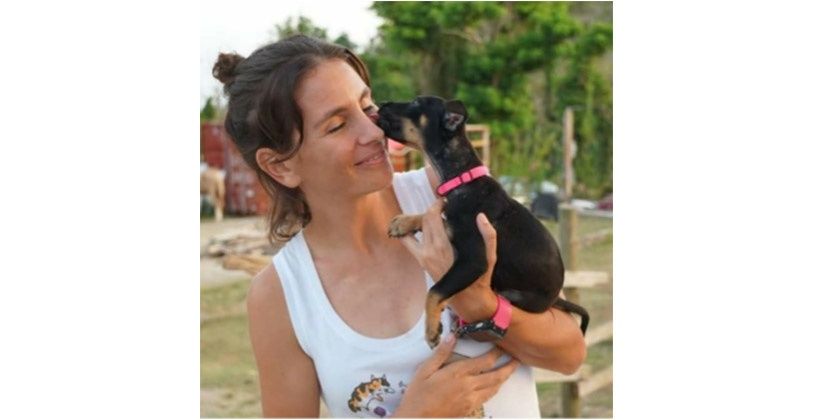 Ms Natasha Ruscheinski, the founder of PAW BVI (Promoting Animal Welfare), is the Territory’s newest recipient of the British Empire Medal (BEM) in The Queen’s New Year 2022 Honours List for her contributions to animal welfare.
Shortly after her arrival in the Territory in 2011, Ms Ruscheinski saw a major need to provide free spaying/neutering to address the issue of the many homeless dogs and cats in the Territory.

In 2014, Natasha established PAW BVI, a registered non-profit charitable organisation which is 100% reliant on fundraising. With the support of unpaid volunteers and the veterinarian team at Canines, Cats and Critters, she created a spay and neuter programme to be offered free of charge for those unable to pay veterinary fees with the intention of reducing the number of unwanted litters being born and so the number of animals vulnerable to abuse, poisoning and starvation.

With costs exceeding $12k per month for PAW surgeries, health checks and emergency assistance, she inspires her team of volunteers to help fundraise, raise awareness and to encourage the community to foster animals in their homes with the aim of socialising them for future adoptions. To date, PAW BVI has sponsored and organised the spaying and neutering of over 3000 dogs and cats.

Natasha has also created relationships with a network of “no kill” animal rescues, primarily in the United States, and PAW has successfully sent 1383 dogs and cats to these facilities to date through the “PAWS in the Air” programme.

The 2017 hurricanes and the global pandemic also led to the abandonment of many dogs and cats in the Territory. She has worked tirelessly with her network, including the Government of the Virgin Islands, to arrange rescue flights overseas to take many of these animals to a better life, including those that had been in the local shelter for extended periods (sometimes years). Support has also been extended to owners struggling financially to provide necessary care, including supplying pet food.

In 2020, a new rehabilitation centre, known as the “PAW Barn”, was opened to assist with recovery and rehabilitation for foster animals needing specialist care.

His Excellency Governor John Rankin CMG said, “Natasha has worked relentlessly as a campaigner to improve animal welfare. Through PAW BVI, she has helped to save and improve the lives of thousands of animals, whether they are unwanted, abandoned, injured or victims of natural disaster. Despite testing times over the last seven years, she has continued to lead a team of volunteers and work with other organisations to help meet challenges faced by owners and animals a like. I offer my warm congratulations to her for receiving this award which rightfully recognises her achievements in the Territory.”

Ms Ruscheinski said that she immensely proud of what PAW BVI has achieved, although there is still much work to be done.

“I am humbled by this award but it is not mine alone, there have been numerous special people who have supported PAW on our mission and I would like to thank each person who has helped over the years. Animal Welfare is not just about the animals, it has a far-reaching impact on the community as a whole and we have seen the positive effects on the families we have worked with. Spaying and neutering remains the most effective way of humanely controlling the animal population.”

Ms Ruscheinski is also a key supporter, organiser, and participant of sporting events in the BVI to raise money for other charitable causes to help low income families and others in need, particularly during the aftermath of the 2017 hurricanes and other times of emergency.

Her Majesty The Queen’s New Year Honours are awarded to individuals in recognition of their outstanding achievements. British Empire Medals are awarded for a ‘hands-on’ service to the local community. This could be a long-term charitable or voluntary activity, or innovative work of a relatively short duration (3 to 4 years) that has made a significant difference.
#the Virgin Islands  #John Rankin