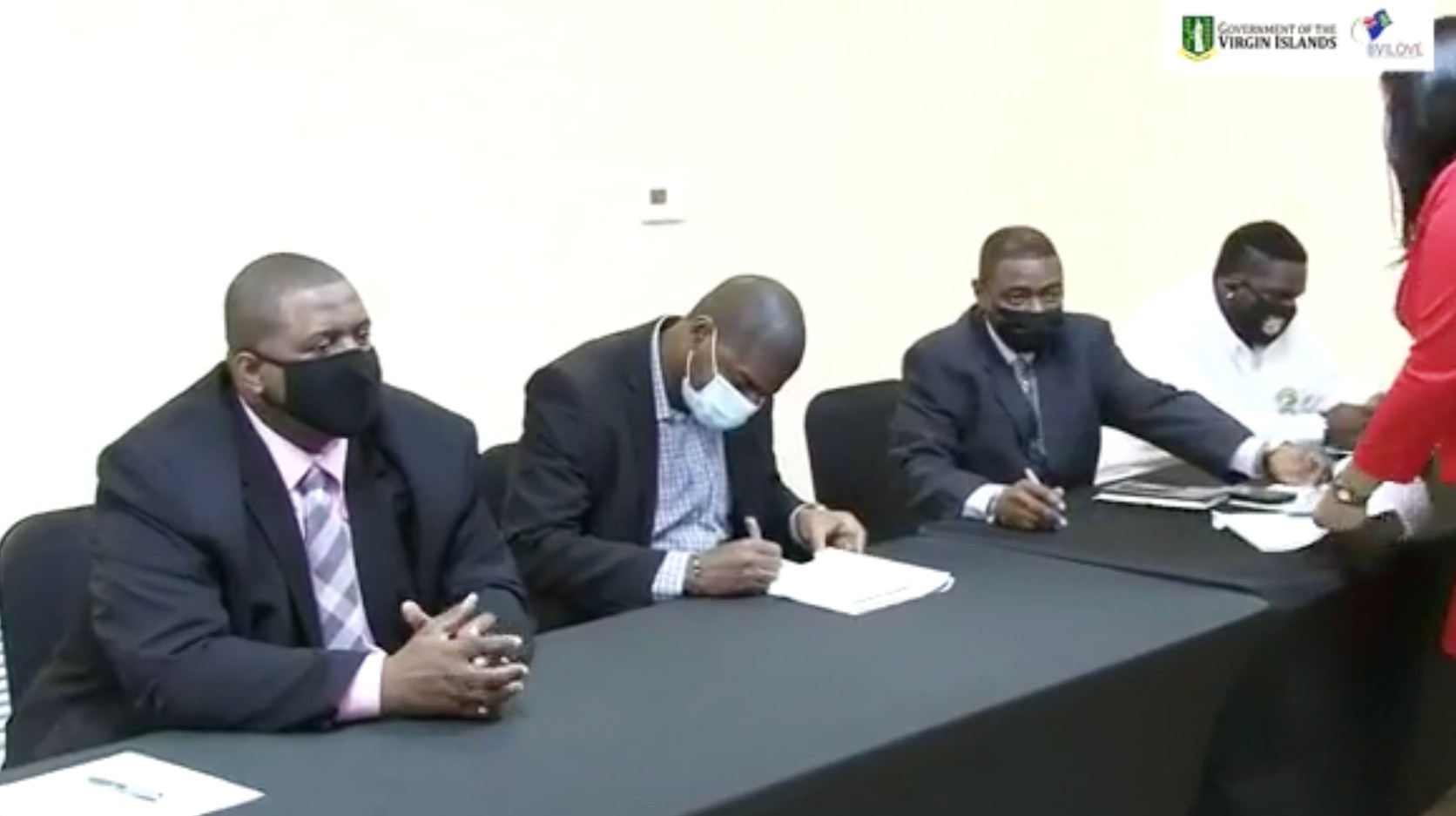 The Recovery and Development Agency was bustling last week as officials signed contracts to install a solar facility at Ivan Dawson Primary School in Cane Garden Bay, to repair the Anegada Administration Building, and to resurface basketball courts on Virgin Gorda and Anegada.

Among five tenders, No Limit Construction won a contract valued at $209,653.86 for the Anegada building, according to RDA Director of Procurement John Primo.

For the solar project, government sent requests to nine firms and two responded, he added. ATEC BVI Limited won the contract, but its value was not announced.

The governor commented on the devastation he saw when he visited the territory after hurricanes Irma and Maria, and he stressed the importance of building back better.

He added that he’s especially pleased with the rehabilitation of the Anegada Administration Building and hoped to visit the island this week.

“It has significance in a number of key areas: potential for solar power generation, efforts towards environmental protection, and preservation of critical endemic species,” he said. “It’s one of the islands most studied by scientists because of its unique geology.”

Mr. Rankin said he’s heard about the sense of community spirit in Anegada and he hopes the administration building can become a focal point on the island.

Deputy Premier Dr. Natalio “Sowande” Wheatley said he’s pleased that repairs will be made to the athletic facilities in Anegada and Virgin Gorda.

“Considering that we haven’t taken any loans since the [Caribbean Development Bank loan], considering our circumstances, we’ve done an amazing job with the resources we’ve had thus far,”he said.

Basketball a ‘way of life’ on VG

Natural Resources, Labour and Immigration Minister Vincent Wheatley called basketball a “way of life” and said that the contract is very important for the people of Virgin Gorda, which he represents along with Anegada.

He noted that the court in Anegada has been damaged since before Irma.

“This is one more activity that the children can have,” he said. “This is a very stressful time for Anegada particularly because there is no tourism.”

He encouraged companies to continue bidding on RDA contracts and to get qualified by taking courses.

“Get qualified, get involved,” Mr. Wheatley said, adding that he dreams of seeing every public building have solar power.

Nathan Wong of Alternative Concrete Solutions explained that his company’s proposal was its first submission to the RDA.

He held up a sample of the rubber mixture that will be used on the courts in Anegada and Virgin Gorda.

“There is a big opportunity for this particular product. It’s a rock and rubber mixture. This is therecommendation that we made,” he said. “This is a natural stone coral pebble finish mixed with EPDM rubber.”

He also said that the mixture is low maintenance and is a permanent solution “intended to last.”

“I grew up between Canada and the [VI] all my life,” Mr. Wong said. “I grew up playing basketball here in the summertime.”