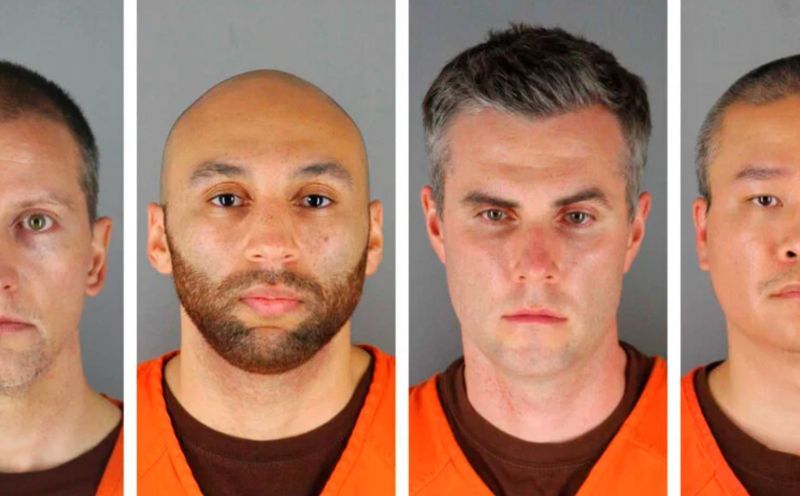 Four former Minneapolis police officers charged with violating George Floyd’s civil rights pleaded not guilty to the federal charges against them.
A federal grand jury indicted Derek Chauvin, Thomas Lane, J Kueng, and Tou Thao in May for allegedly depriving Floyd of his rights while acting under government authority.

Floyd, 46, an unarmed Black man, handcuffed and not resisting, was held face-down by the four officers while Chauvin placed his knee on Floyd’s neck, choking him. The May 25, 2020 incident was captured on bystander video. Floyd’s death led to worldwide protests and calls for changes in policing in the US.

All four of the men appeared at the hearing remotely via videoconference on Tuesday. Chauvin appeared from a room in the state’s maximum-security prison, where he is serving a 22.5-year sentence for murder in Floyd’s death. The other three men appeared remotely alongside their lawyers.

The federal indictment alleges Chauvin violated Floyd’s right to be free from unreasonable seizure and unreasonable force by a police officer.

Thao and Kueng are charged with violating Floyd’s right to be free from unreasonable seizure by not intervening to stop Chauvin as he knelt on Floyd’s neck.

All four officers are also charged with depriving Floyd of his rights when they failed to provide him with medical care.

Lane, Kueng, and Thao have asked that their federal civil rights trial be separated from Chauvin’s on grounds any jury would be unfairly prejudiced against them if they went to trial alongside him. US prosecutors have asked the court to conduct one trial for all four.

During Floyd’s arrest, he repeatedly said he could not breathe as Chauvin pinned him to the ground. Kueng and Lane helped restrain Floyd; Kueng knelt on Floyd’s back, and Lane held Floyd’s legs, according to evidence in state court.

Thao held back bystanders and kept them from intervening during the more-than-nine-minute restraint.