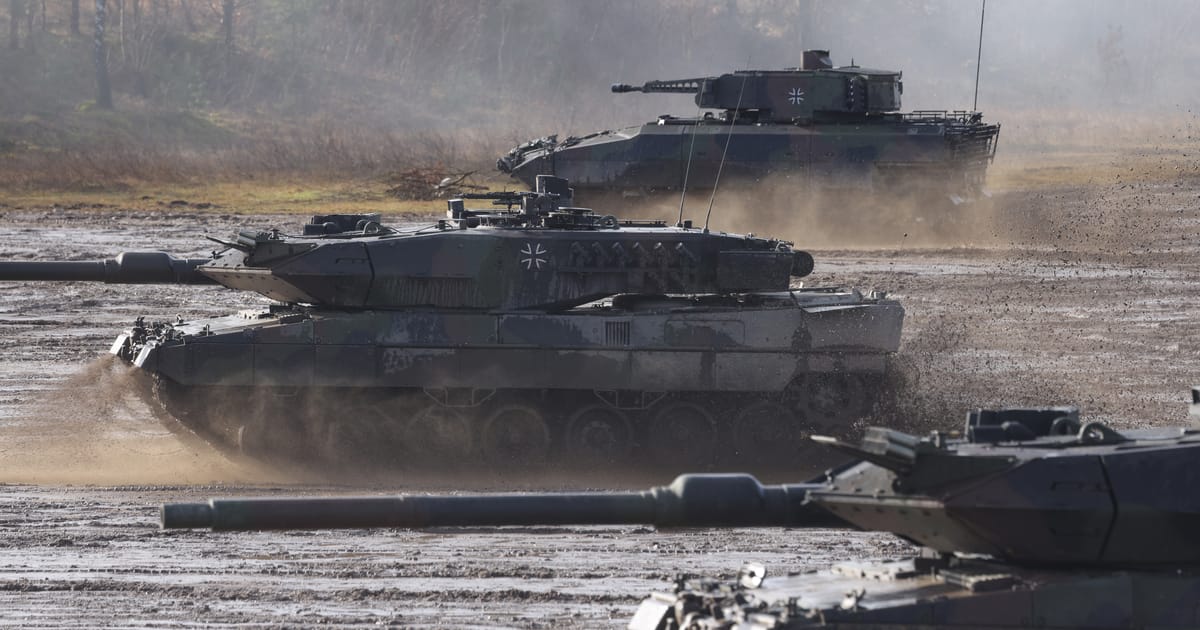 If Germany relents and sends Leopard tanks, it is likely several other EU countries will too.

Less than a week after Germany finally agreed to supply Ukraine with Marder infantry fighting vehicles, pressure is building on Berlin to step it up and send modern battle tanks.

France and Poland are pushing the EU’s biggest economy to equip Kyiv with its powerful Leopard 2 tank, while Britain is reportedly considering sending about a dozen of its Challenger 2 main battle tanks to Ukraine. If Britain did so, this would make it significantly harder for Berlin to hide behind its current argument that it does not want to act alone in sending heavy weaponry.

Almost a year into Russia’s war against Ukraine, Western military analysts fear Moscow will launch a new offensive in the coming weeks or months, seizing on the depletion of Kyiv’s ammunition reserves.

Supplying modern Western tanks such as the Leopard 2 would be a big boost for Ukraine’s military, as Kyiv’s allies have so far only been willing to send older Soviet-era tanks that had still been in the stocks of Eastern European countries, as well as other weapon systems such as howitzers and air defenses.

A French official told POLITICO that Paris is turning the screws on Germany in the hope of extracting an agreement from Berlin to send Leopard tanks to Ukraine ahead of a Franco-German summit on January 22, the 60th anniversary of the Élysée partnership treaty between the two nations.

Germany, Spain, Poland, Greece, Denmark and Finland are among numerous countries already using the approximately 60-ton Leopard 2, which is equipped with a 120-millimeter cannon as well as a state-of-the-art defense system and armor. This would allow allies to jointly organize delivery of both the tanks and required ammunition, and team up on the required maintenance and repair.

“The Ukrainians really want the Leopards because there are lots in stock across Europe,” said the French official, who is familiar with the tank discussions.

However, since the Leopards are being produced by Munich-based defense company Krauss-Maffei Wegmann, their delivery to Ukraine demands a re-export authorization by the country of origin, Germany — meaning that international pressure is now concentrating on Berlin.

“Poland can hand over Leopards only in a coalition of countries,” Polish Prime Minister Mateusz Morawiecki told reporters on Saturday, adding that talks with other countries on forming such an alliance are ongoing.

“I talked about it with German Chancellor Olaf Scholz a couple of weeks ago in Brussels, and I think we may know more about it in the next few days,” Morawiecki added.

Asked about demands by partners such as Poland to form such a tank alliance, a German government spokesperson said Monday he was “not aware of any such requests at the moment,” but stressed that “we constantly reassess the situation and then derive our closely internationally coordinated decisions from it.”

Just last Thursday, German Chancellor Olaf Scholz and U.S. President Joe Biden announced in a joint statement that their countries would send infantry fighting vehicles — up to 40 German Marders and around 50 American Bradleys — to Ukraine; one day after French President Emmanuel Macron had rushed ahead by announcing the delivery of French AMX-10 RC armored fighting vehicles. 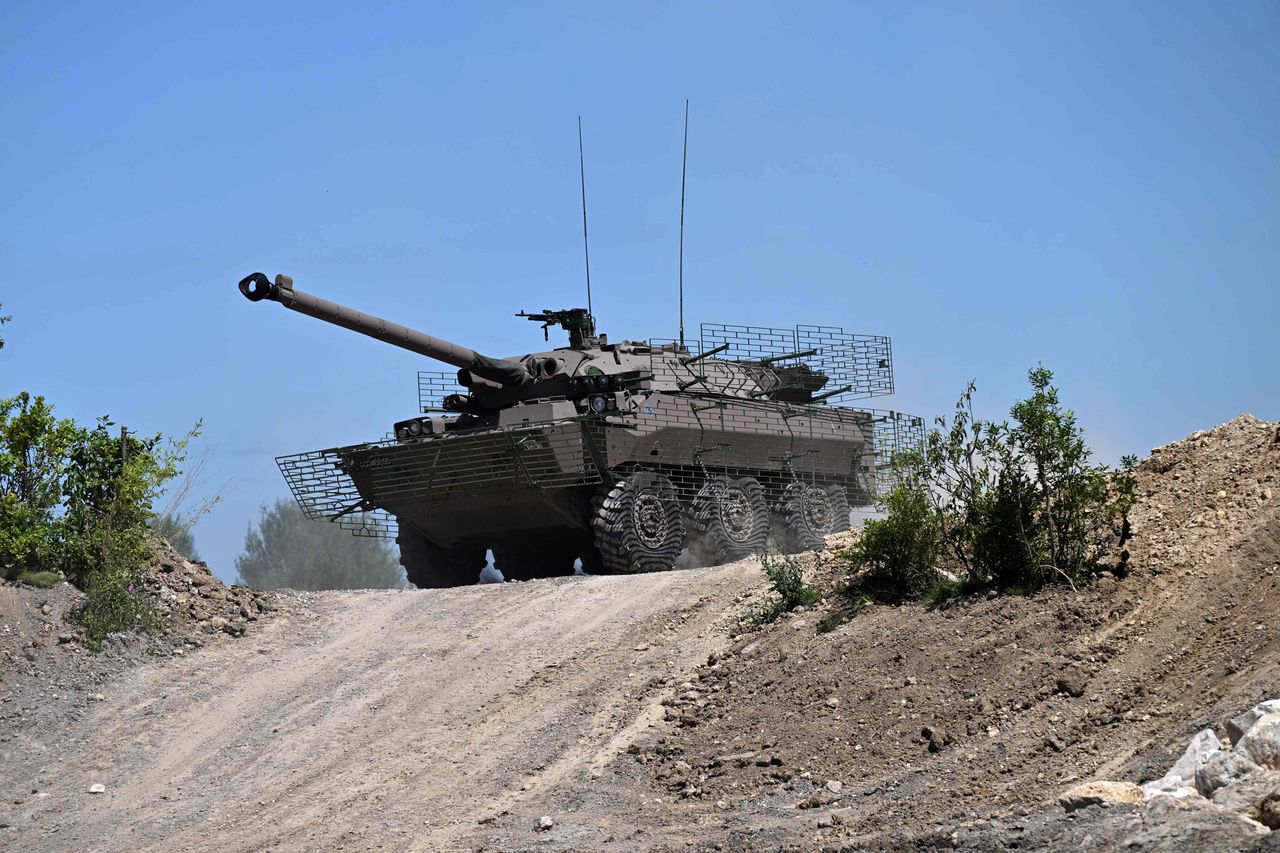 While German officials insist the announcement resulted from close coordination, many factors — such as Defense Minister Christine Lambrecht saying just weeks earlier that it would be impossible for Germany to send any Marders to Ukraine, as it needed them for its own military — suggest that Berlin took the decision reluctantly and only amid growing international pressure.

That suggestion was supported by the French official who, speaking on the condition of the anonymity due to the sensitivity of the matter, said that “the aim” of Macron’s announcement last week to hand over the French armored fighting vehicles “was to break the taboo [of sending Western tanks to Ukraine], so that the Germans start moving.”
“There’s a complicity

between Macron and Zelenskyy, and this was somewhat staged to lift the U.S. and Germany reluctance [on sending tanks],” the official said.

Ukraine has also asked Paris to send French Leclerc battle tanks to Ukraine, a request that is currently being examined by the French authorities. French officials caution, however, that Leclerc tanks are no longer in production, raising questions over maintenance and the provision of spare parts — problems that the Leopards, due to their wide availability in many nations and their continued production, do not face.

Still, France would be willing to deploy its Leclerc tanks to NATO allies that send some of their own Leopard tanks to Ukraine, in order to fill gaps, an official in Paris said.

One official in Berlin said that a recent notable diplomatic success by Scholz, namely getting China and a broader coalition of other G20 countries to sign a statement urging Russia not to use nuclear weapons, has alleviated concerns in Berlin that the delivery of more Western military equipment to Ukraine could lead to a third world war.

However, the German government spokesperson stressed Monday that one of Berlin’s key goals remained avoiding becoming an active party to the war, and added that there was “no automatism” that would make the delivery of Leopards “the next logical step” following the decision to send Marder tanks.

Meanwhile, German news outlet Der Spiegel reported Monday that the U.K. government is considering supplying about a dozen Challenger 2 tanks to Ukraine, which would make it the first country to support Kyiv with Western main battle tanks.
London has

already announced the possible delivery to partners “in a nonbinding manner,” Der Spiegel wrote, adding that the decision will probably only be made official at a planned meeting of Western defense officials at the Ramstein military base in Germany on January 20.

The U.K. defense ministry neither denied nor confirmed the report, with a spokesperson saying: “The government has committed to match or exceed last year’s funding for military aid to Ukraine in 2023, and we will continue to build on recent donations with training and further gifting of equipment.”