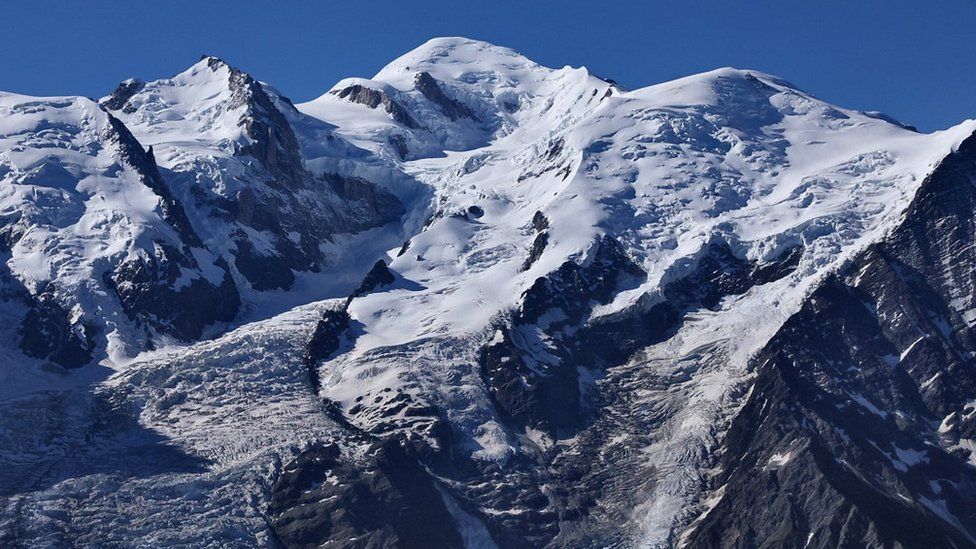 Jean-Marc Peillex is mayor of Saint-Gervais, a village at the foot of Western Europe's highest mountain, whose summit is at 4,807m (15,774ft).

Those who ignored warnings and took the Goûter route up the mountain were playing "Russian roulette", he said.

The heatwave has increased rockfalls.

Mayor Peillex said the average cost of a rescue on the mountain was €10,000 and funeral costs were €5,000. "It is unacceptable for the French taxpayer to cover those costs," he said in a press release.

His statement on the village's official website noted that mountain guides were now refusing to take climbers on the popular Goûter route - also known as the Royal Way - from Saint-Gervais or the nearby Alpine resort of Chamonix. Their decision is in force until mid-August at the earliest.

Mayor Peillex castigated some "pseudo climbers" who insisted on attempting the climb "with death in their backpacks".

He told the BBC "I wanted to make people react, to understand that today it's very dangerous, almost suicidal to go up".

He has closed until further notice the mountain refuges at Goûter and Tête Rousse because of rockfalls. He said there had been a major rockfall on Thursday which would have killed anyone had they been in its path.

He has not yet issued a legal ruling on the proposed deposit, but has the power to impose it, he told the BBC. He said the amount "has to be startling to focus attention on this". "If anyone thinks it's illegal they can go to court to challenge it," he added.

He said a group of Romanians were found on the mountain on 30 July wearing shorts and trainers. A police helicopter ordered them through a loudhailer to turn back, he said, "and while they did so, they said they would return the next day"!

A lack of winter snow and this summer's extraordinary heat have destabilised rocks and made crossing crevasses more difficult. The heat - attributed to climate change - has also increased the risk of avalanches in the Alps, as glaciers melt.

An expert guide in Chamonix quoted by AFP news agency, Olivier Greber, said only a dozen to 20 skilled mountaineers were able to reach the summit each day, compared to 100-120 usually.

Mont Blanc has 11 peaks above 4,000m in France and Italy and normally attracts hundreds of thousands of tourists every year. Besides Goûter, several other routes up the mountain, including from Courmayeur in Italy, remain open despite the hazards.

Mayor Peillex said he did not have legal power to close the Goûter route.

He told the BBC's Chris Bockman that, despite the danger, on Thursday alone 70 people attempted the climb and the number was rising each day.

He said the number of rescues and deaths in the Mont Blanc massif had not risen this year. In most years there are hundreds of rescues in the massif and several dozen climbers' deaths.