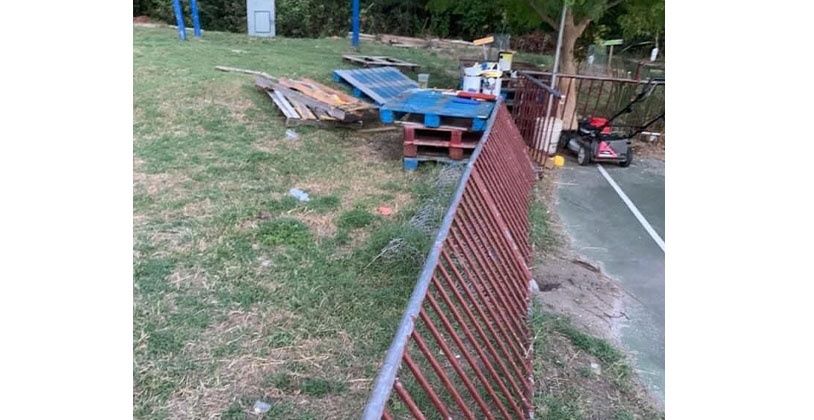 Parents, teachers and concerned residents of Jost Van Dyke (JVD) staged a protest earlier today, September 15, against the existing condition of the Jost Van Dyke primary school that students and educators have been forced to utilize.

“They are protesting because finally the people of Jost Van Dyke, the Parents Teachers Association, the principal, teachers everybody have come to their point of frustration,” Second District Representative Hon. Melvin ‘Mitch’ Turnbull told BVI Platinum News.

He said he has been at that point since 2019 when he made a video depicting the situation of the school.

“With a $400 plus million budget, children are learning where they have no class, no windows, no air conditioning when it rains outside, it might as well rain inside. Right now, the current problems that they are facing are issues of mould, it[school] is filled with debris. They are now forcing teachers, students, male and female to use one bathroom; and then there are the electrical issues, exposed wires, the outlets are all exposed," the opposition member bemoaned.

According to Hon. Turnbull, since the 2017 hurricanes, the school was deemed to be structurally unsound, “but we still have our children in that building.”

He said he is pleased that the community came out to protest, and “I will stand with my parents, the people of JVD because they deserve better and the children deserve some environment conducive for learning.”

“It’s been far too long that you are hearing promises from government; yes, they say they have the approved plans for the new school; as I said and I have been asking this question in the House of Assembly many times before," he related.

Hon. Turnbull added, "so the parents have decided that today and tomorrow that they are not sending their children to school until they can have some word or action from the minister and ministry or the Premier regarding what will happen in the immediate instance for their children to be in an environment conducive for learning.”

The legislator said the government “seem to be moving on some things”, such as issuing millions through various stimulus packages and hiring political consultants but would seemingly neglect the students and teachers of that island."