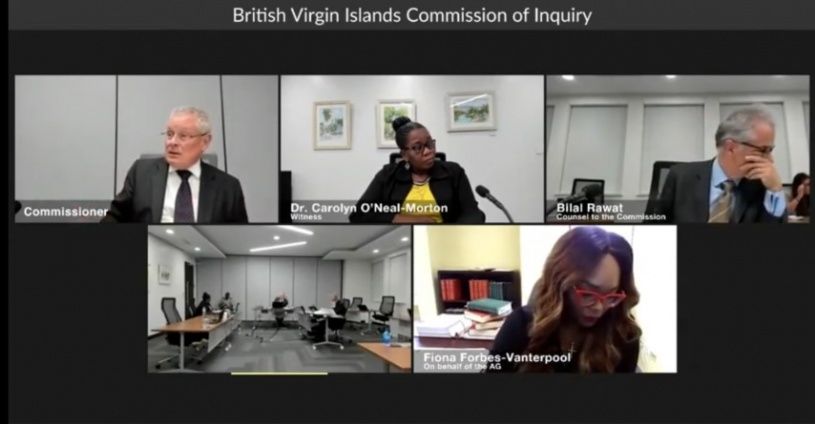 After grilling Permanent Secretary in the Premier’s Office Dr. Carolyn O’Neal-Morton in excess of seven hours, Commissioner of the UK-backed Commission of Inquiry (CoI) has concluded that the Government’s methodology for issuing monies to Farmers and Fisherfolk under the COVID-19 Stimulus Grants, was full of “rational flaws.”

Sir Gary Hickinbottom’s comments were made towards the end of Dr. O’Neal-Morton’s appearance before the CoI on Friday October 8.

“…So what happened in mid-September 2020, you say, is that the applications were coming in, as I understand it, the applications required that the farmer or a fisherman to say, what would I want is to buy a new fence, barbwire, or a new engine for a boat and it is going to come to $6,000 or $15,000 or whatever it would cost. So that was the basis for the application,” Sir Gary inquired from the Permanent Secretary.

He continued: “The application form, as I understand it would have to assure you, the Premier’s Office, what the money would be spent on items to do with the farming or fishing, and that’s what came in.”

The Commissioner further expressed that giving money based on those estimates were scrapped, in favour of this banded system, “which wasn’t based upon need or expenditure at all, it was based upon an estimated number of employees which was just taken as a figure together with the minimum wage, together with an eight hour a day, a six days a week x three and that ended up with the sum.”

He reasoned that despite this, the beneficiaries of the grants are obliged to verify expenditure.

“This was the scheme that was implemented. At the moment, I just can’t see any logic in that scheme, for this reason: the applications were based on the expenditure. The individuals who got the money have to account for expenditure, but in the middle there is a calculation to how much they got, which is based on just on expenditure except a hypothetical calculation,” he said.

The PS replied: “…Because we had some anomalies under this for example there was a farmer who wanted to do some planting and asked for money just for the coconut trees, but the farmer also sent in a photograph, and we realized based on that, the money that she requested would not have been enough and she wasn't in a position to really assess her needs.”

She also pointed to another irregularity.

“One of the farmers asked for a grant of $400,000; had he gotten his grant, that would have almost been 25% of what the amount was. Had we given him what he needed, based on his request, what would we have done with the rest of the persons? We wouldn’t have had sufficient money.”

She said because of these anomalies, “…we thought that it would have been fair to at least create a banding system working about the number of persons, calculating using minimum wage, how much times per day you might work and come up with a reasonable figure. Bearing in mind Commissioner, they have to account for whatever monies that we give them.”

However, Sir Gary was not sold on her reasoning.

“I don’t understand that, there are a number of steps in this process that I find not quite rational. One is to have a banding system based upon hypothetical income and highly hypothetical income because we know from your report that two-thirds of farmers have other jobs, which means that farming is not their main source of income. But, also to work out the bands on the basis of hypothetical work as opposed to expenditure which goes into the application, and at the end, they have to account for, seems to me very odd.”

He said it also brings to light some of the examples which appeared inexplicable to the Auditor General.

He said when a farmer expressed his needs and applied for a sum of $500, “ …so he puts in an application for $500; what does he get? He gets $13,500 worked out on a hypothetical basis which has absolutely anything to do with his particular circumstances. So that’s another irrationality.”

In response, PS Dr. O’Neal-Morton said the government was aware that in some cases, those applying for stimulus had other jobs, but their farming and fishing was a business venture.

“Commissioner, if they were given too much money and they cannot account for it, they have to pay it back. You don’t think they will pay it back?” she asked.

She said: “as I said before, some people expressed a need but in the absence of an assessment which Agriculture [Department] we had to do some superficial assessments, based on photographs and based on our prior knowledge.”

The stimulus is still ongoing, PS Dr. O’Neal-Morton said, as there are some beneficiaries who have not collected their stimulus to date.