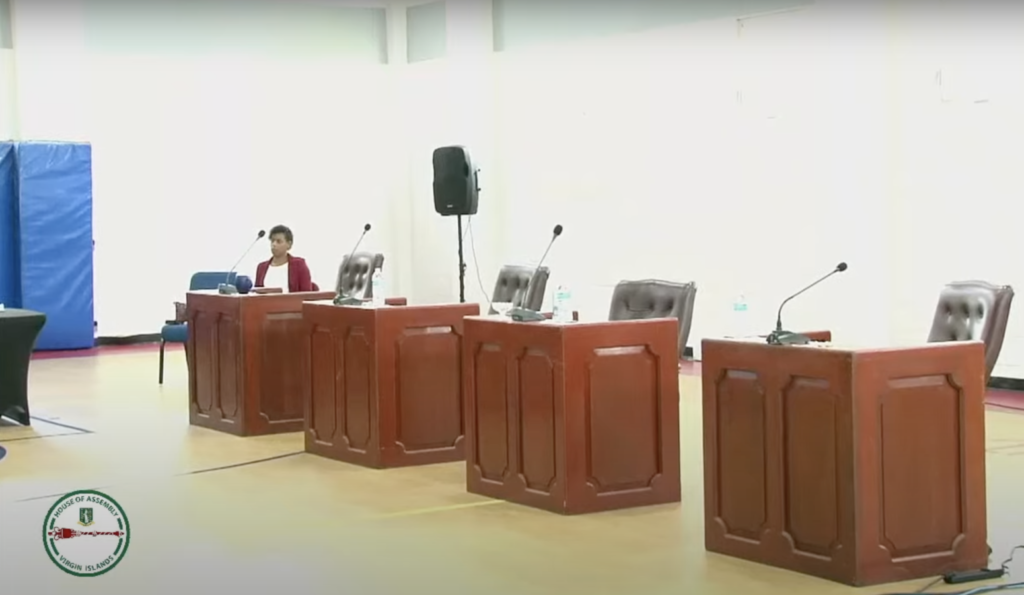 All four members of Her Majesty’s Loyal Opposition were visibly absent on Monday when the House of Assembly resumed to debate government’s proposed Virgin Islands Investment Act 2020.
While wrapping up the debate — most of which happened last week — Premier Andrew Fahie brought attention to the absence by instructing the House’s camera technician to pan over to the Opposition aisle to highlight the empty seats.

BVI News contacted Opposition Leader Marlon Penn to find out the reason for their absence and whether they were performing a boycott.

Penn told our news centre he was present for parliament at 10 am when the House was scheduled to begin but only two persons were there at the time. He left some time after and went to his office.

“I can’t say that there is a boycott. I could only speak for myself in terms of my absence … The sittings was scheduled to start at 10 am this morning. The Premier didn’t have a full complement until after 12 today. I, personally, have refused to sit at the House of Assembly for two and sometimes over two hours waiting on the Premier and his members to come to start a sitting that is scheduled to start at 10 o’clock,” Penn said.

He continued: “The Premier is constantly late … This is the same Premier when he was Opposition Leader complained about the House starting on time. And now he’s breaking the same rules that he continuously complained about when he was in Opposition. He has no respect for the House of Assembly, he has no respect for the time of the people of this territory and he continues to come late and start the people’s business late and then has the nerve and the audacity to talk about panning the camera to see who is there. Pan the camera at 10 and see who comes. Pan the camera and see when he does come to the House 12, 11, 11:30, 1 pm to conduct the peoples business. The leader of the government’s business. It’s a disgrace.”

Roughly two hours after the session began, the House entered what is known as the Committee stage where the bill is privately considered in very close detail.

Penn said he arrived to participate in committee but the House went into recess. He said he would be present for committee when the House resumes.
#Fahie