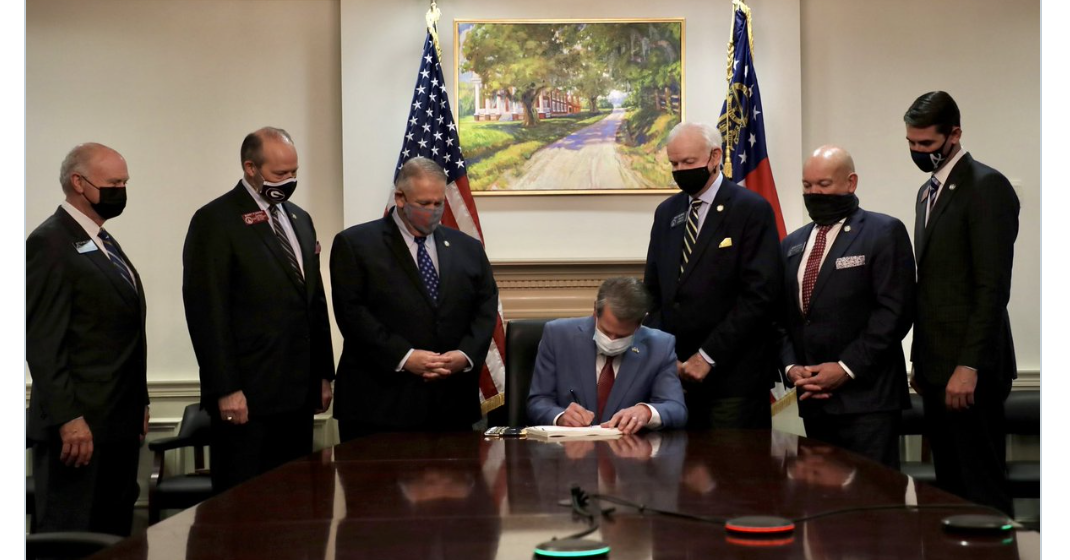 Democrats have described the law as the new Jim Crow. The Republican governor signed it under a painting of a place where Black people were once enslaved.

Georgia Gov. Brian Kemp on Thursday signed into law a series of controversial voting restrictions decried by Democrats as "Jim Crow 2.0" — and he did so alongside a group of white men and in front of a painting of a plantation where Black people were once enslaved.

In a Twitter thread Friday, Philadelphia Inquirer columnist Will Bunch pointed out that Kemp signed the bill under the image "of a notorious slave plantation in Wilkes County, GA."

The painting appears to depict a brick house on the Callaway Plantation in Washington, Georgia, which was once a 3,000-acre plantation owned by a family of enslavers and is now open for public tours.

"In 2021, the irony of Kemp signing this bill — that makes it illegal to give water to voters waiting on the sometimes 10-hour lines that state policies create in mostly Black precincts — under the image of a brutal slave plantation is almost too much to bear," Bunch tweeted.

Republicans have said the new law will restore voters' confidence in the state's elections after Donald Trump lied about election fraud when he lost to the state to President Joe Biden.

However, voting rights advocates said the law will suppress turnout among Black and brown voters, who showed up in record numbers to lead Democrats to victory in the presidential and Senate elections.

Among several voting restrictions, the law imposes new ID requirements for absentee ballots, criminalizes giving voters food and water while they stand in lines, hands over control of county election boards to the state’s Republican-led legislature, and limits the use of ballot drop boxes.

"It’s Jim Crow in a suit + tie: cutting off access, adding restrictions, encouraging more 'show me your papers' actions to challenge a citizen's right to vote. Facially neutral but racially targeted," Abrams wrote in a series of tweets criticizing the law.

"I’m convinced that we’ll be able to stop this, because it’s the most pernicious thing, this makes Jim Crow look like Jim Eagle,” Biden said during his first formal press conference on Thursday, before Kemp signed the bill into law.

He reiterated his criticism on Friday after the law was signed.

On Thursday, a video of Democratic lawmaker Rep. Park Cannon being arrested after she knocked on Kemp's door during the bill's signing prompted more outrage from Democrats. After she was released from jail, she tweeted that she was "arrested for fighting voter suppression."

A lawsuit against the new law filed Thursday by voting rights groups in Georgia said, "the Voter Suppression Bill disproportionately impacts Black voters, and interacts with these vestiges of discrimination in Georgia to deny Black voters an equal opportunity to participate in the political process and/or elect a candidate of their choice."

As Bunch, the Philadelphia Inquirer columnist, pointed out, the painting appears to resemble "Brickhouse Road — Callaway PLNT" by Wilkes County artist Olessia Maximenko, which was listed by the Georgia Council of Arts as one of several artworks by local artists that are displayed in the governor's office at the state Capitol.

Maximenko did not respond to BuzzFeed News' request for comment.

The painting in question depicts the brick mansion on the Callaway Plantation, which the city's website describes as a "historic restoration project [that] offers a glimpse into the by-gone era of the agricultural South when working plantations speckled the land."

The Callaway family gifted the property to the city in the 1980s. The six historical structures on the property, including the Dally Slave Cabin, are open for public tours.

According to historical accounts, the family owned dozens of slaves. The Callaway name appears several times on a 2003 list of the largest slaveholders as per the 1860 US Census Slave Schedules for Wilkes County, Georgia.