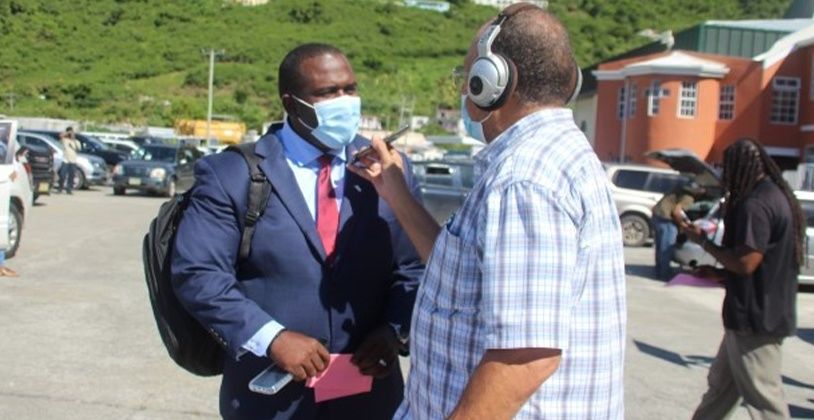 Opposition Leader Hon. Marlon Penn is claiming that while the Hon. Andrew Fahie led regime is touting that they did not run into deficit spending, some $1.8 Million is owed to vendors, including the contractor who constructed the new visitor centre at the T.B Lettsome International Airport last year.
Hon. Penn said during his contribution to the budget debate last week, that the $1.8 Million is owed collectively to 120 plus vendors for more than 90 days.

“One of the line items that are owed to vendors is the visitor centre that we were bragging about, we had several ceremonies we had about that COVID Visitor Centre, how it was built in the shortest period of time, it is one of the most efficient buildings ever built and we praised the contractor for the work that he did to build that building....”

He continued: “Mr. Speaker, do you know that up to this day that contractor expended his own personal resources to build that building is still owed some $106,000 a year later? December is going to make a year since it was built. Mr. Speaker you cannot continue to say that you have managed to scathed deficit spending but you are running the country on the back of the businesses! You have one of your contractor’s monies!”

He also pointed out that the contractor is not likely to be paid any interest despite the lengthy time owed.

“Over a year you haven’t paid him, you are not going to pay him interest but if he doesn’t pay his NHI on time, or if he doesn’t pay his taxes on time he is charged a percentage on this late payment but you the government is running your operations on the backs of the businesses in this territory. Mr. Speaker, it is wrong! You cannot pad your balance sheet and owe all these contractors and small businesses in this country! It is destroying the business sector in this country,” he said.

The territory was able to re-open last December to international travellers because the main airport was equipped with the welcome centre tailor-made for the ongoing Coronavirus Disease (COVID-19) pandemic.